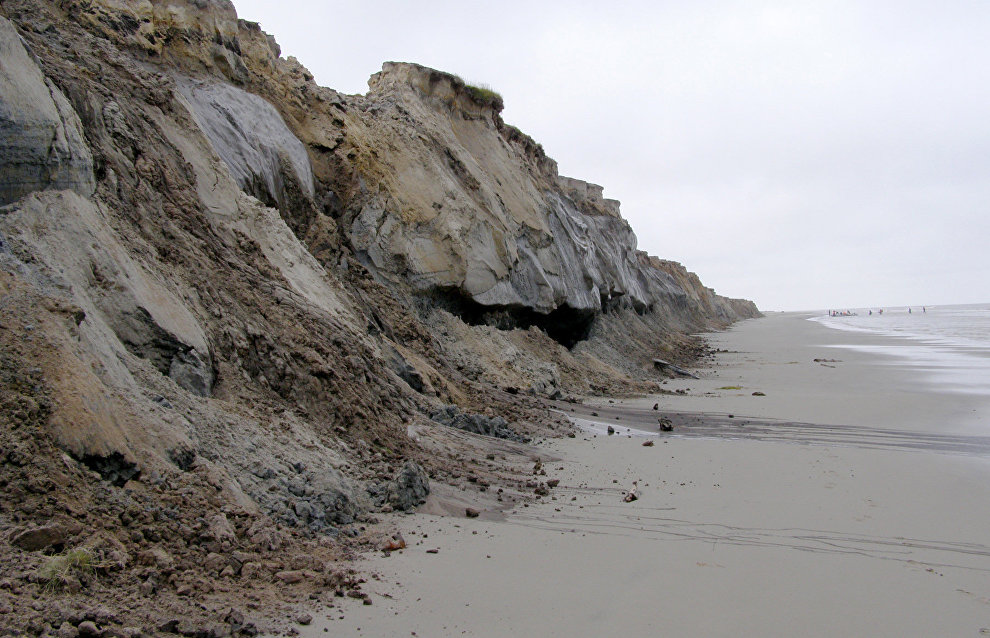 Ogorodov: Annually Russia losses an area equal to the size of Liechtenstein

The staff of the Northern Geo-ecology Lab of the Geography Faculty of Moscow State University is researching where, why and how quickly the coasts of the Russian Arctic are receding and which sections in the future will be the most vulnerable and what the Polar Ocean coast will look like in several dozen years from now.

Annually as much as 10 meters

Almost the entire coast of the Russian Arctic lies in the permafrost zone. About half of the coast is covered by frozen soil, which consists of between 20 and 50 percent of ice, and in some sections in Eastern Siberia with the ice complex, the share of ice in the soil reaches as much as 80 to 95 percent.

The coastal zone of the Polar Ocean is where the coast that consists of frozen soil is not only exposed to the thermal effects of water and air, but also to the mechanical effects of the waves during the short northern summer, so such coasts recede quite quickly. Scientifically, this process is called "thermal abrasion:" destruction of coast composed of frozen rocks or ice.

"The coast of the Polar Ocean exposed to the thermal abrasion is destroyed at a rate of 1 to 5 meters per year, and in some cases up to 10 meters per year. As a result, Russia loses several hundred square kilometers every single year. This loss can be compared with the territory of a small European country, for example, like the Principality of Liechtenstein," pointed out Stanislav Ogorodov, professor of the Russian Academy of Sciences, head of the Northern Geo-ecology Lab of the Geography Faculty of Moscow State University.

Scientific knowledge about the speed and the mechanics of thermal abrasion in the context of the current climatic change on the planet is a priority for planning human activities in polar regions and for infrastructure there, because the economy of the Arctic is mostly concentrated on the coast where ports, oil storage terminals, and gas refining plants are built and underwater pipelines and telecommunications cables are laid. Sometimes the construction of engineering facilities in the Arctic coastal zone affects the environment irreversibly: disturbances in the thermal and lithodynamic regimes triggers the mechanism of coastal destruction and speeds up the development of thermal abrasion.

This is why today experts from the Northern Geo-ecology Lab of the Geography Faculty of Moscow State University are trying to determine the connection between the global climate change and local anthropogenic disturbances and the speed of the destruction of the Arctic sea coast. In other words, after the project, the researchers will be able to understand where, why and how quickly the coasts of the Russian Arctic are receding and which sections will be most dangerous in the future plus what the Polar Ocean coast will look like in several dozen years from now.

Drones to the rescue

It is noteworthy that the lab has traditionally researched the coasts, especially in the western Russian Arctic, and has a wide network to monitor the situation around the coast established in the key sections of the oil and gas exploration of the Kara and Pechora seas back in the 1980s. At the same time, over the last decade the monitoring network has expanded to Chukotka. The observation methods have changed, too: high-resolution space photos taken at various times are now used more widely.

At the first stage of the project, the scientists gathered a database of information and data gathered at various times and made an analytical review on the changes of the perennial frozen coast of the Russian Arctic. In addition to this, a series of expeditions to Yamal, Taimyr and Chukotka took place in the summer and fall of 2018 and 2019, which took aerial pictures of the coast using an unmanned aerial vehicle.

At the second stage, which is scheduled to finish in May 2020, the scientists will build a computer model based on their database of spatial and temporal changes of the Arctic coast in the natural conditions as well as due to climate change and human activities. The model will be used for a retrospective assessment of the changes in the Polar Ocean coastline.

"We don't see a catastrophe"

Today some results of the research can already be discussed. For example, it turned out that during the summer the edge of the drifting ice goes further north in the Arctic, and the coastal water stays free from the ice for a longer period. As a result, the period of thawing of the frozen soil becomes longer and the mechanical impact of the waves on the coast increases. The wave acceleration length as well as the height and duration of storm tides also grow, further enhancing the mechanical and thermal effect on the sea coast."Climate change is a popular topic today. We can often hear that due to the warming the degradation of the permafrost will go extremely quickly and we will face a catastrophic destruction of the coast at a speed of around dozens of meters per year. It is true that after 2005, along with the decreasing area of the ice cap in the Arctic ocean our observations record a notable increase in the speed of receding of the coasts with perennial frozen soil; and the erosion ledge formed and active destruction of the coast began in several previously stable places. However, although the speed of the coastal destruction has increased, we are not observing a catastrophe," Stanislav Ogorodov said. 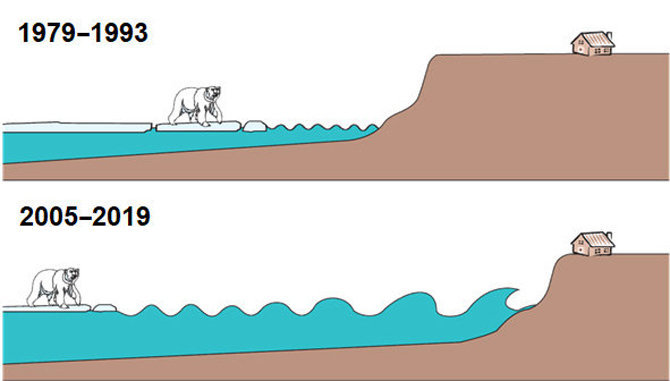 Changes in the parameters of waves and how they affect the coast due to the reducing ice cap in the ocean and increasing wave acceleration length. © Press service of the Geography Faculty, Moscow State University

According to Ogorodov, the thermal and wave factors seldom work simultaneously. For example, during a warm year, when the coast is thawing quickly, there may be no heavy storms, and vice versa: in a cold year when the thawing is not so intense, the wave effect alone is not enough for a catastrophe.

At the next stage, the researchers plan to model the thermal abrasion process under various scenarios of climate change and various areas of the Arctic ice cap. In addition to this, they will assess how the anthropogenic factor affects the state of the coastline.

The research is being carried out as part of the Russian Foundation for Basic Research's project No. 18-05-60300 "Thermal abrasion of the Russian Arctic sea coast."