The Tikhaya Bay polar station operated on Hooker Island, part of the Franz Josef Land Archipelago, from 1929 until the late 1950s. It served as an improvised capital of the Soviet Arctic for several decades and ranked among the largest high-latitude stations. The station, which did not cease its work even during the Great Patriotic War of 1941–1945, is to celebrate its 90th anniversary later this year.

Almost 1,000 kilometers to the North Pole. Is this far? You don't think about such trifles here, in Tikhaya Bay. All you have to do is look at a map, and it turns out that the station is located almost on the Top of the World. The geographical names that we had to learn at school are all over the place.

"Is Franz Josef Land really part of Russia?" people asked me on the mainland. "Russia," I drawled pensively and recalled the never-ending polar day, the ocean's black and lazy waters that are slower than molasses in January, as well as the snow-drifts and the pea-soup fog.

An iceberg that probably drifted up toward the neighboring Scott-Keltie Island at night looks like a runway or a table, depending on your imagination. 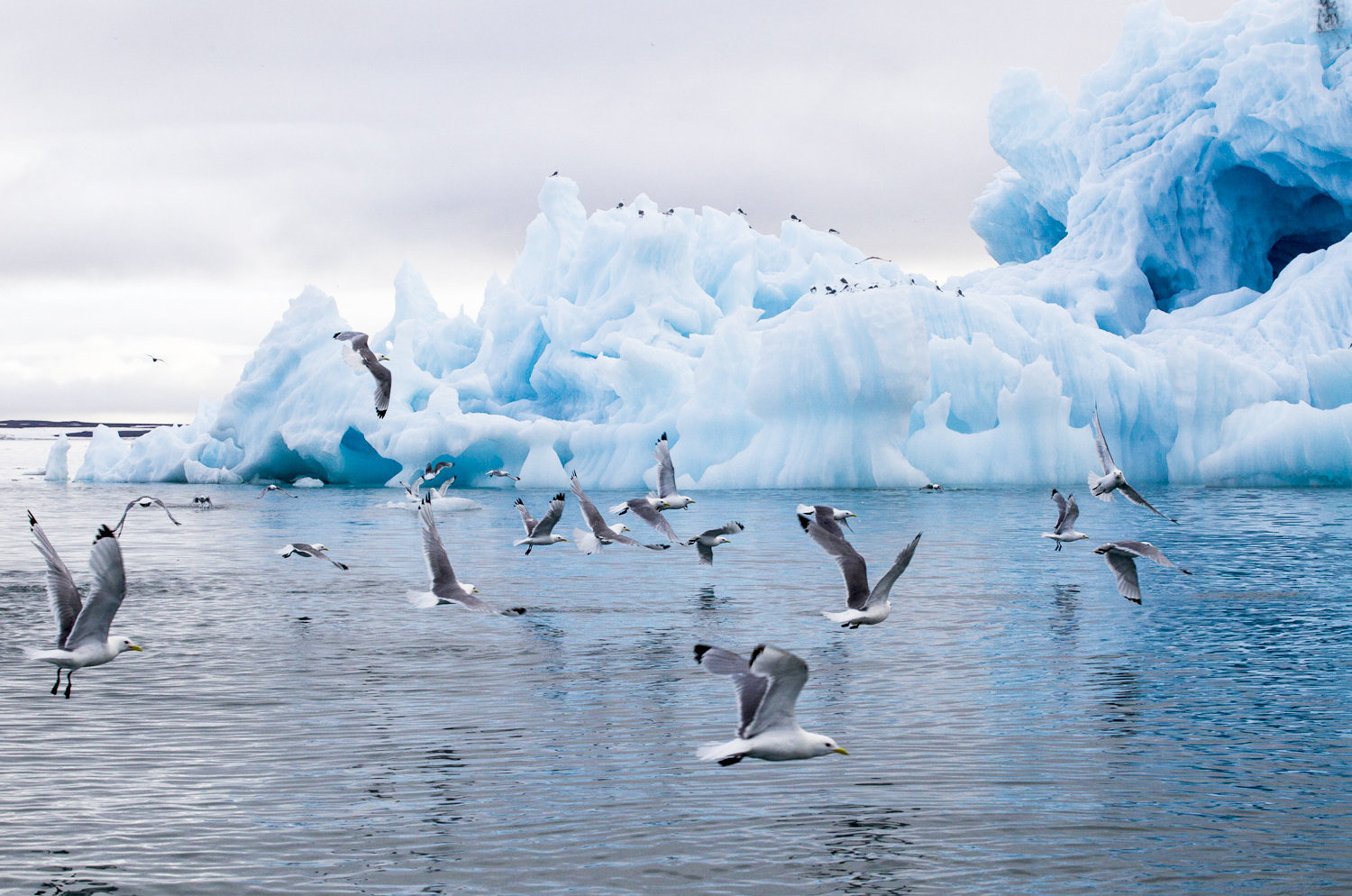 For many days, the bay had been clogged with small pieces of ice, but this day was completely different. You could see clear water with specks of sunshine all the way to Rubini Rock. The nuclear-powered icebreaker 50 Let Pobedy (50th Victory Day Anniversary) was scheduled to arrive soon. Each summer, it carries tourists from Murmansk to the North Pole and back, stopping at Franz Josef Land.

The icebreaker docks at Tikhaya Bay, the anchor base of Russian Arctic National Park, with the locals throwing a samovar party for its crew and passengers. This is hardly surprising because people don't show up in the high Arctic latitudes very often. Besides, this is a good chance to exchange news and letters and to see new faces. To be honest, working at an isolated facility is a tough business.

Tourists ask all sorts of questions. An Englishwoman once inquired whether it was possible to take a bath here and was lectured on the Russian steam-bath and the strict rules for the station's staff members who are like soldiers on polar duty. 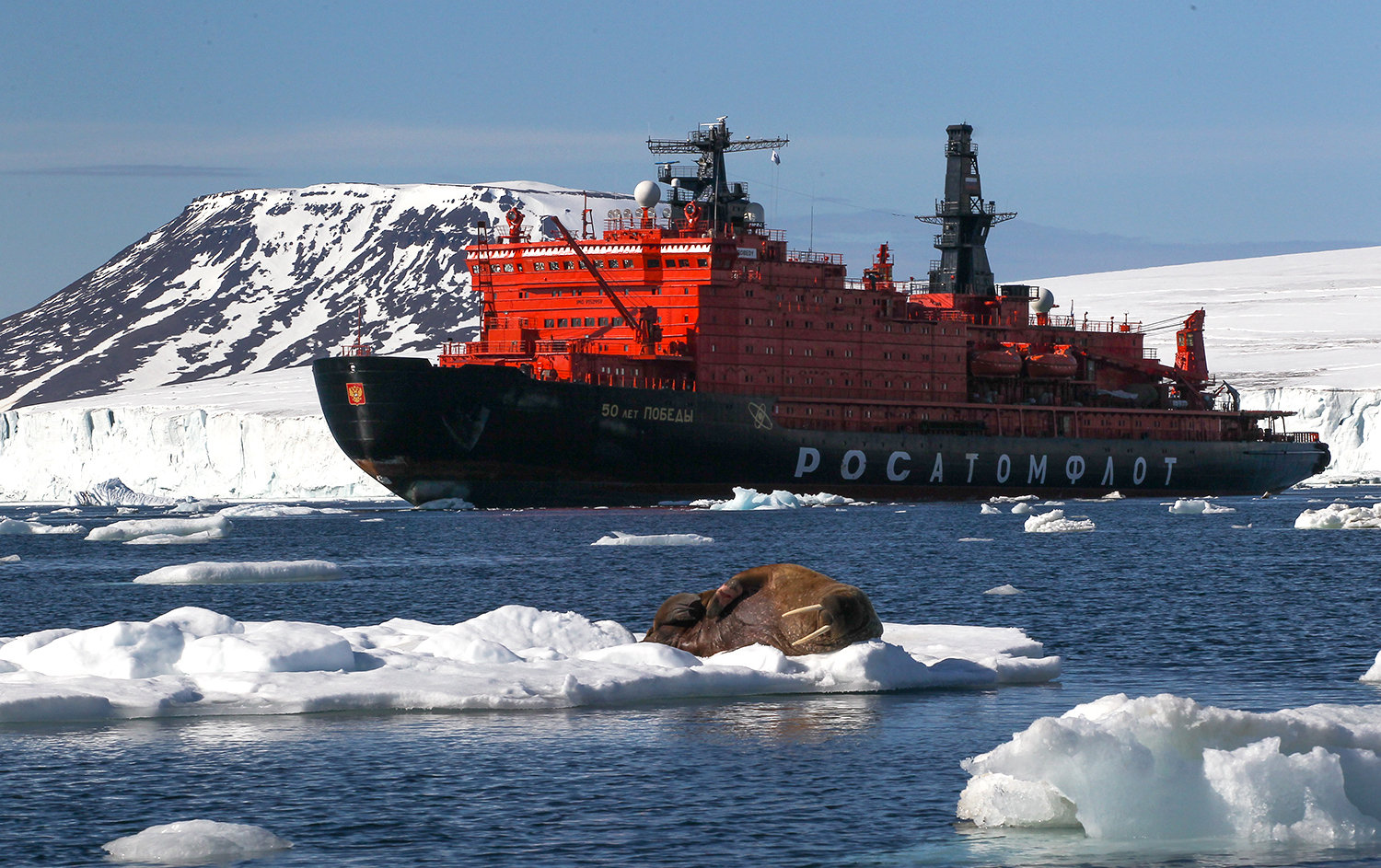 A mischievous, bungling and reckless Arctic fox stole a tourist's glove, dashed between the stones and hid it far away from everyone.

There are no boundaries between humans and nature in the Arctic. It is like being in outer space. People become immersed in this new world, and they get completely carried away. They can watch bears wandering along their customary routes across the station territory and poking their curious snouts at the windows. An Arctic fox and its family have settled down nearby. A noisy bird colony on Rubini Rock sounds like a mega-city. It appears that a group of walruses has been showing up for a guided tour every day. Some of them drift by on ice-floes, basking in the sun and turning from side to side.

Tikhaya Bay boasts an epic history. Members of Georgy Sedov's expedition spent the winter here. Otto Schmidt established the first polar station at the bay. Famous radio operator Ernst Krenkel set a world record by communicating with a US base in Antarctica via a short-wave long-range transmitter for the first time in history. And the crew of the German airship Graf Zeppelin exchanged mail with the icebreaker Malygin near Hooker Island.

Under Ivan Papanin, the bay experienced a "construction boom"; several buildings, including a hangar for two aircraft, sprung up here. The hangar is one of the tallest buildings in high latitudes. A team from the Arctic Museum-Exhibition Center, now restoring the aircraft hangar, will attain peak capacity this year. 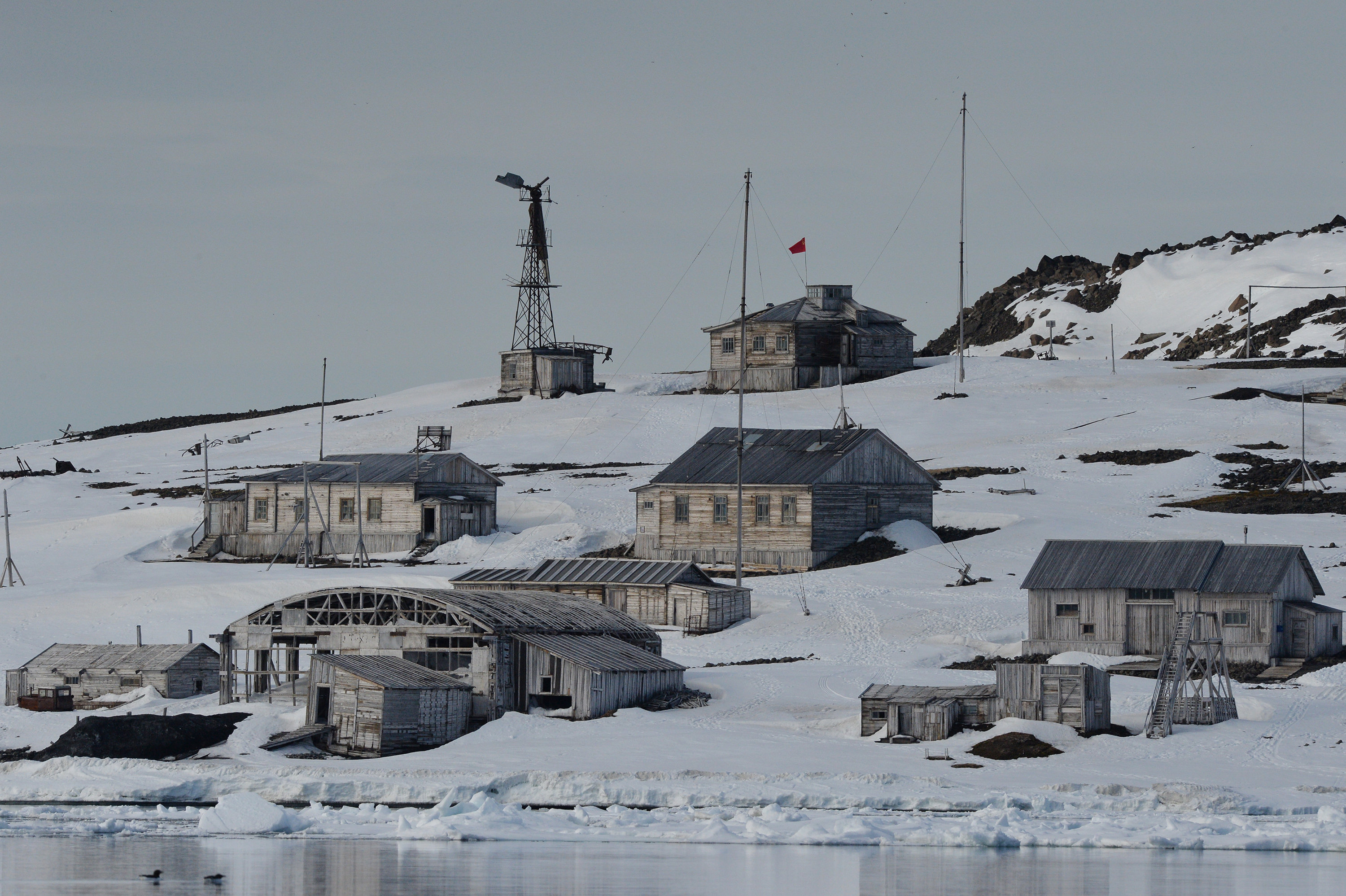 In 2011, Tikhaya Bay was like a ghost town, a former polar station abandoned in the late 1950s. One had the impression that everyone had disappeared overnight, without boarding up the windows or shutting the doors, leaving everything in perfect disorder and not even removing the garbage.

The national park's first expedition to Tikhaya Bay proved very difficult. It was impossible to live in the local houses which were filled with snow that eventually turned into ice.

"We assessed the scale of the disaster and realized that we had to clean the station manually, without using any equipment. We conducted an inventory of various historical-cultural landmarks and compiled a detailed map," said the station's chief Alexei Kunnikov who has been living in Tikhaya Bay all these years.

Over the next two summer seasons, people packed the waste into bags and removed about 100 metric tons of garbage in 2014. Buildings were also renovated. Four homes are now open for occupancy, and 20 people can stay there, on Hooker Island.

Each year, Tikhaya Bay receives 800–1,000 visitors who have to use nature trails because Arctic nature is so fragile.

A little bed and other “treasures”

"We found a little bed inside one of the houses. It was surprising to see it so far away from civilization," Yevgeny Yermolov, who is in charge of the national park's historical-cultural heritage preservation department, noted.

Here is an explanation for the find. In 1935, a girl named Severina (Northerner) was born in Tikhaya Bay. Her name and place of birth were quite unusual. Polar explorers suggested some other names, including Ledoksana, Gukernaya (Hooker Island Girl), Zefika and Barentsa. But the majority voted to call her Severina. Her brother was born a year later, with most staffers voting to call him Rodvark (Born in the Arctic).

"Wherever you go in Franz Josef Land, you can find something unique," Yermolov went on to say. 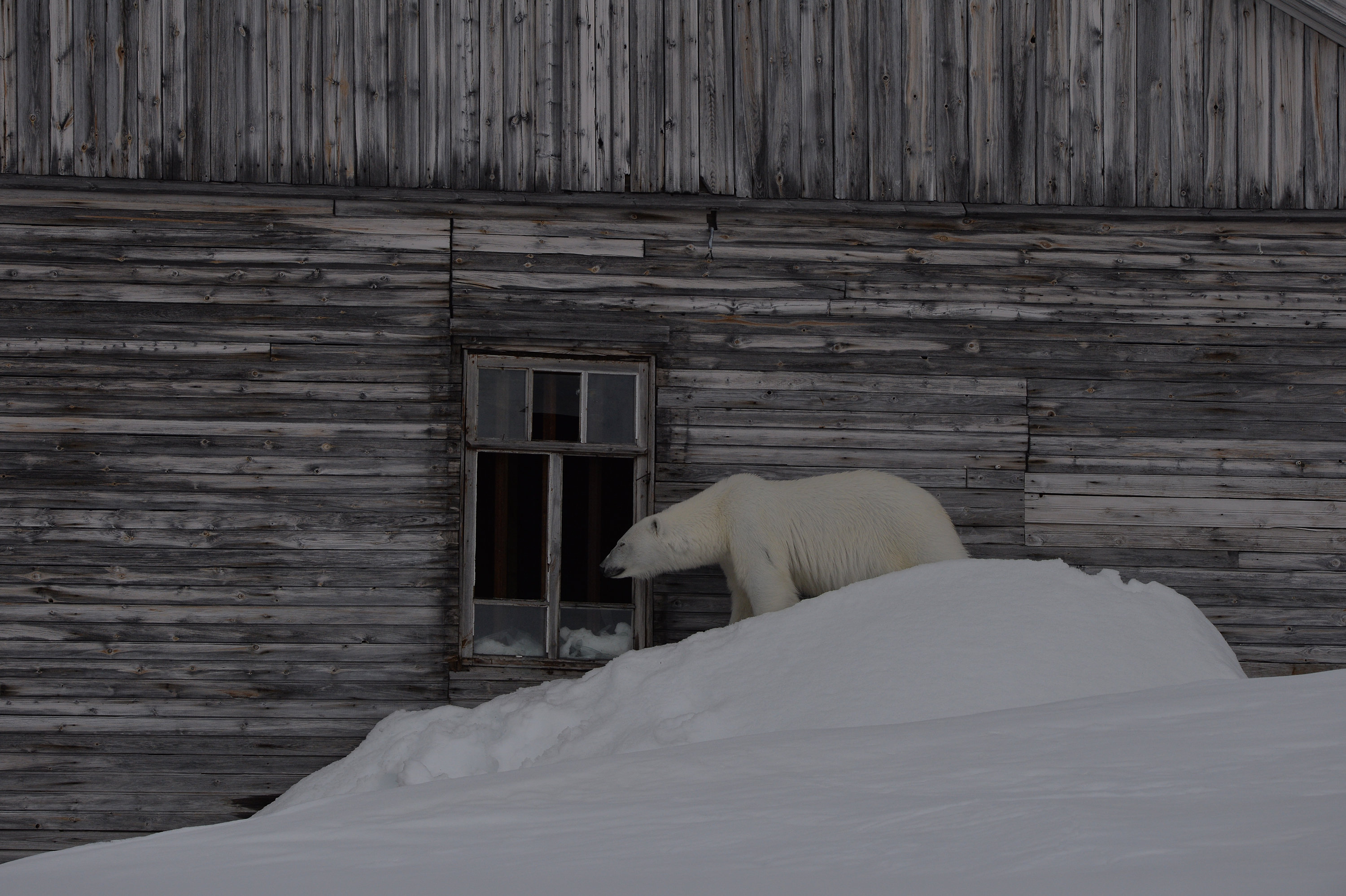 Last season, in the attic of a home in Tikhaya Bay, polar explorers found a red ballot-box with a seal made from plasticine.

"That was a high-quality ballot-box with a slot, meaning the locals were actively involved in the country's public-political life and never felt detached from the mainland USSR."

In 1943–1944, during the Great Patriotic War, the secret German meteorological station Treasure Hunter operated only 150 kilometers from Tikhaya Bay.

"I heard many legends about Hitler's bunker there and the Third Reich's gold reserves that were allegedly delivered to that facility. The Germans used a huge grotto in the vicinity to repair their U-boats. The entire German station has now turned into a pile of rusty tin cans."

Speaking of the national park's other territories, an eight-meter Pomor ship was found on Novaya Zemlya in 2016. Its hull was coated with sturdy Vitsa ropes, made from twisted tree trunks, for greater durability. In 2017 and 2018, Yermolov located parts of a 1930 metal flag on Alger Island and donated them to the museum's collection.

"The expedition heading toward Tikhaya Bay involved the best Soviet researchers, including Otto Schmidt, Rudolf Samoilovich and Vladimir Wiese. During their first stint in 1929, they set up a station on Hooker Island. In 1930, they came back and installed a radio transceiver there, replaced the station's team and also landed the famous polar explorers Nikolai Urvantsev and Georgy Ushakov on Severnaya Zemlya. All of them visited Alger Island and had relevance to placing the flag there. This was the second Soviet expedition to Franz Josef Land, with its members placing the Soviet state flag on these disputed territories for the first time. Therefore they became part of the USSR." 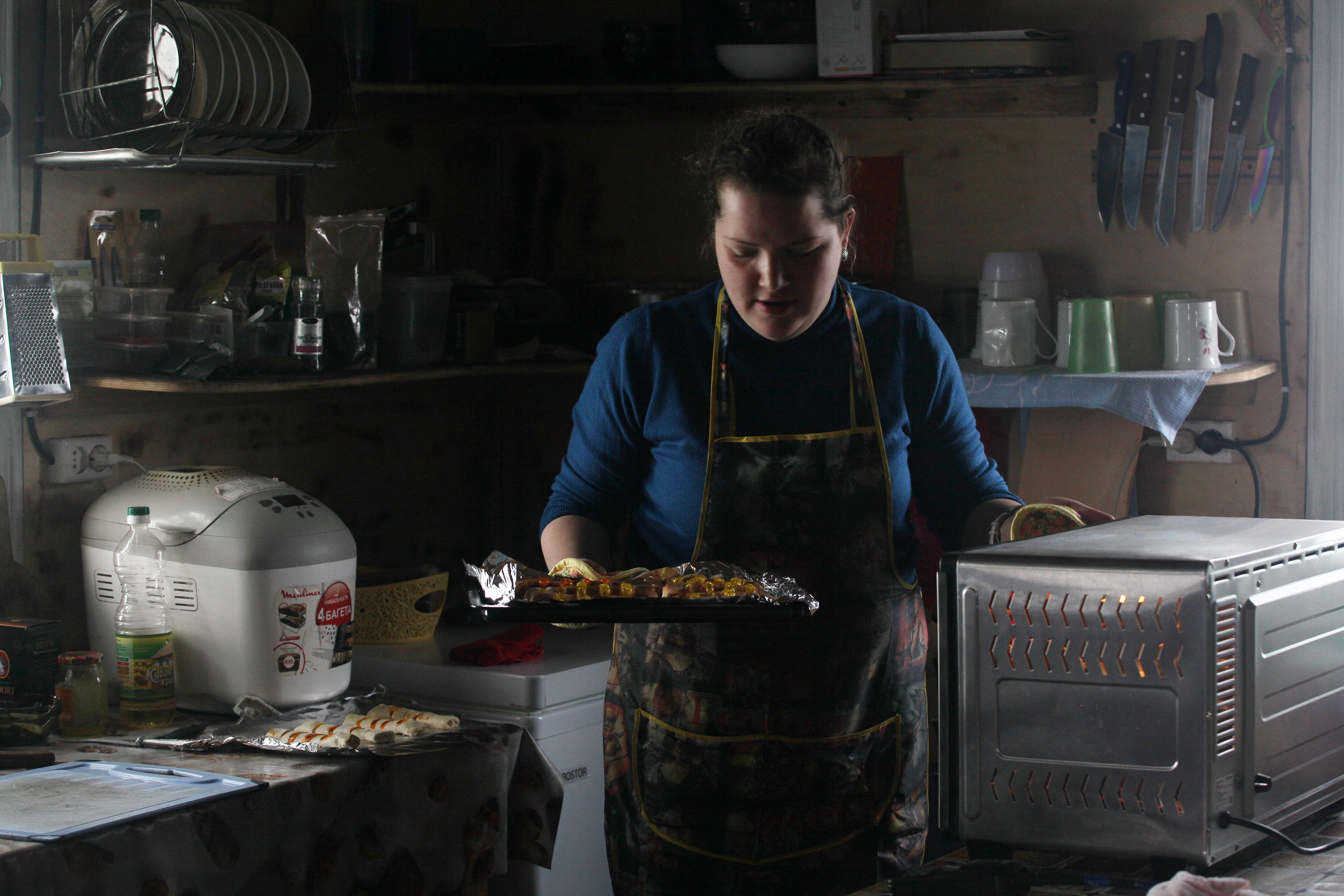 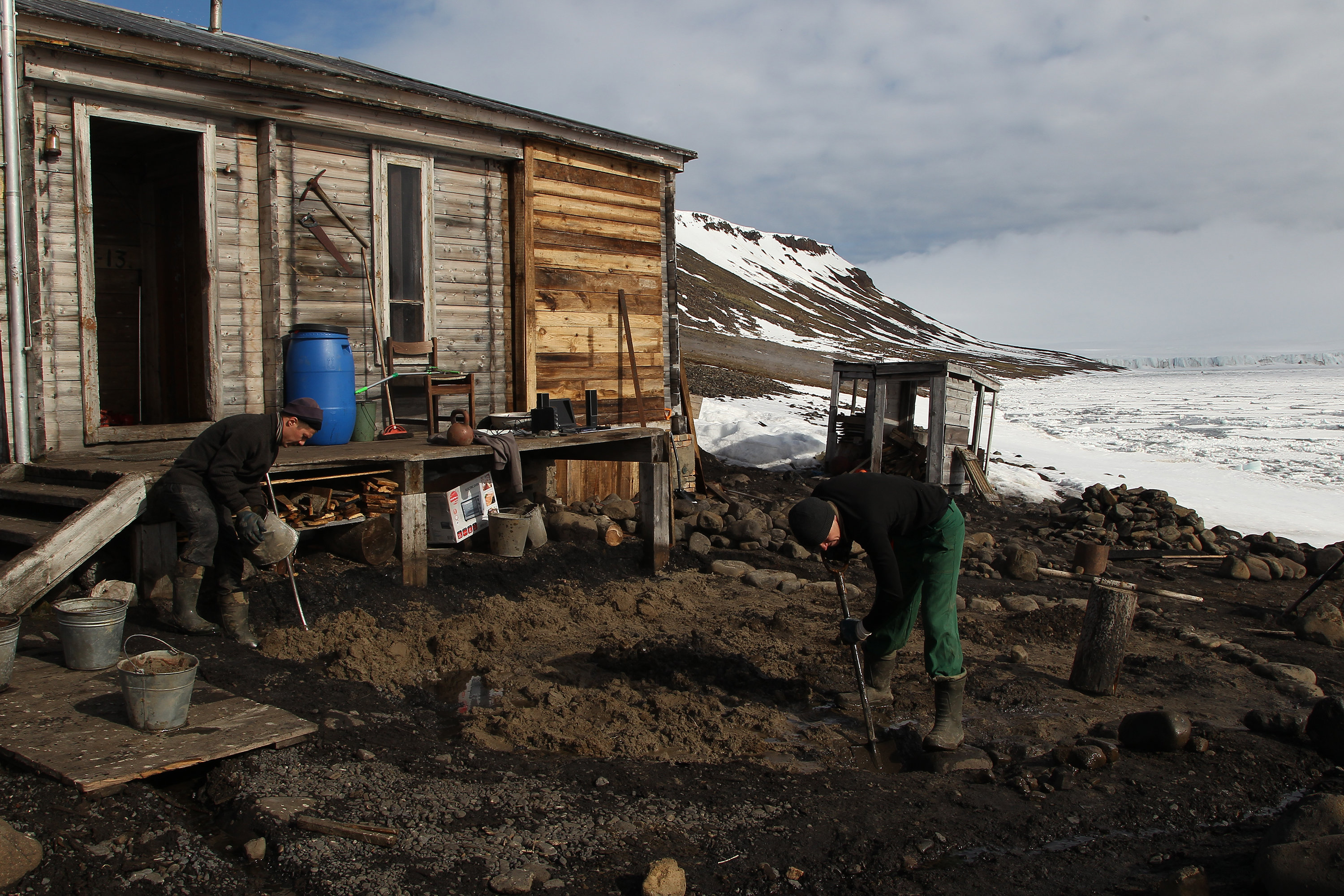 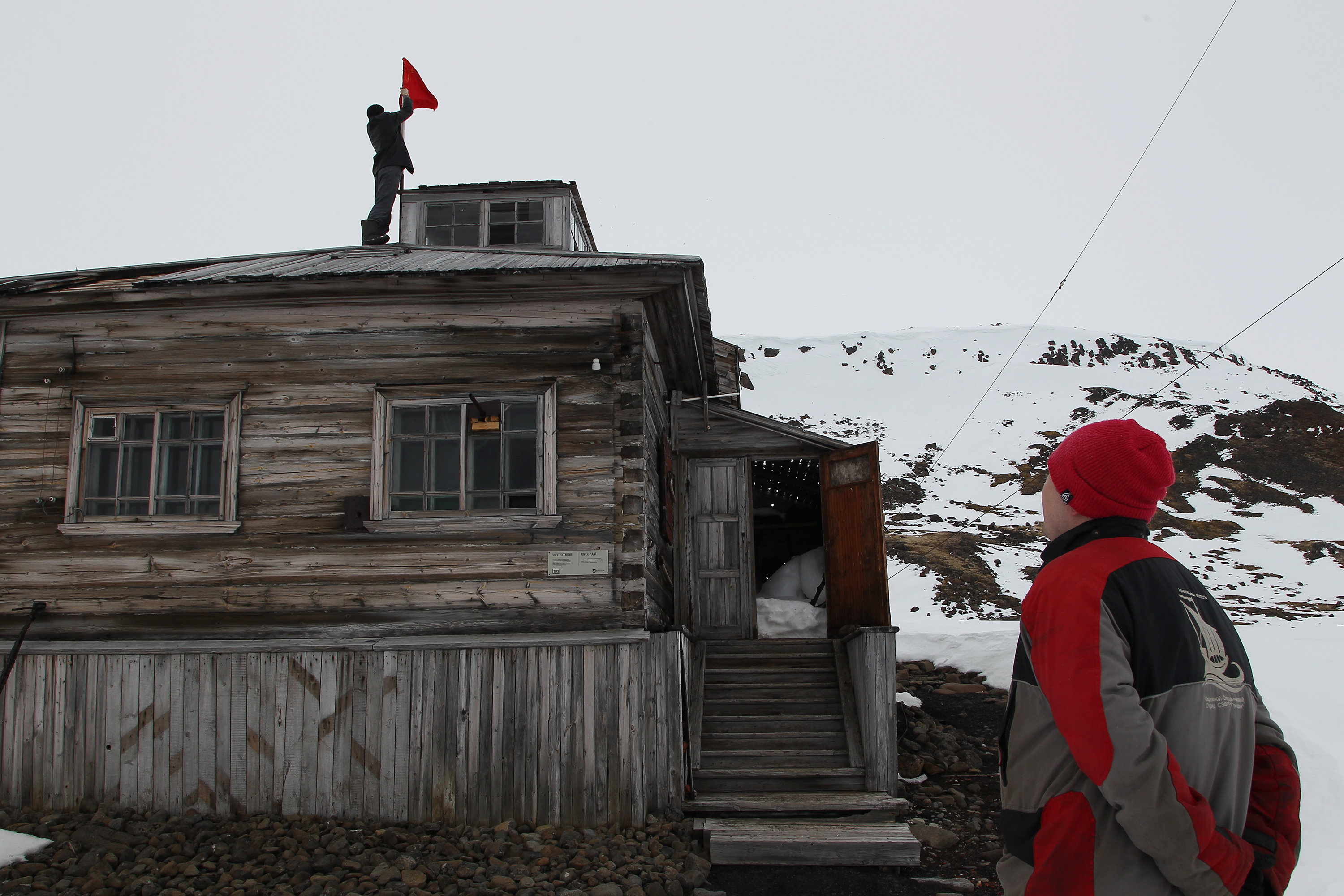 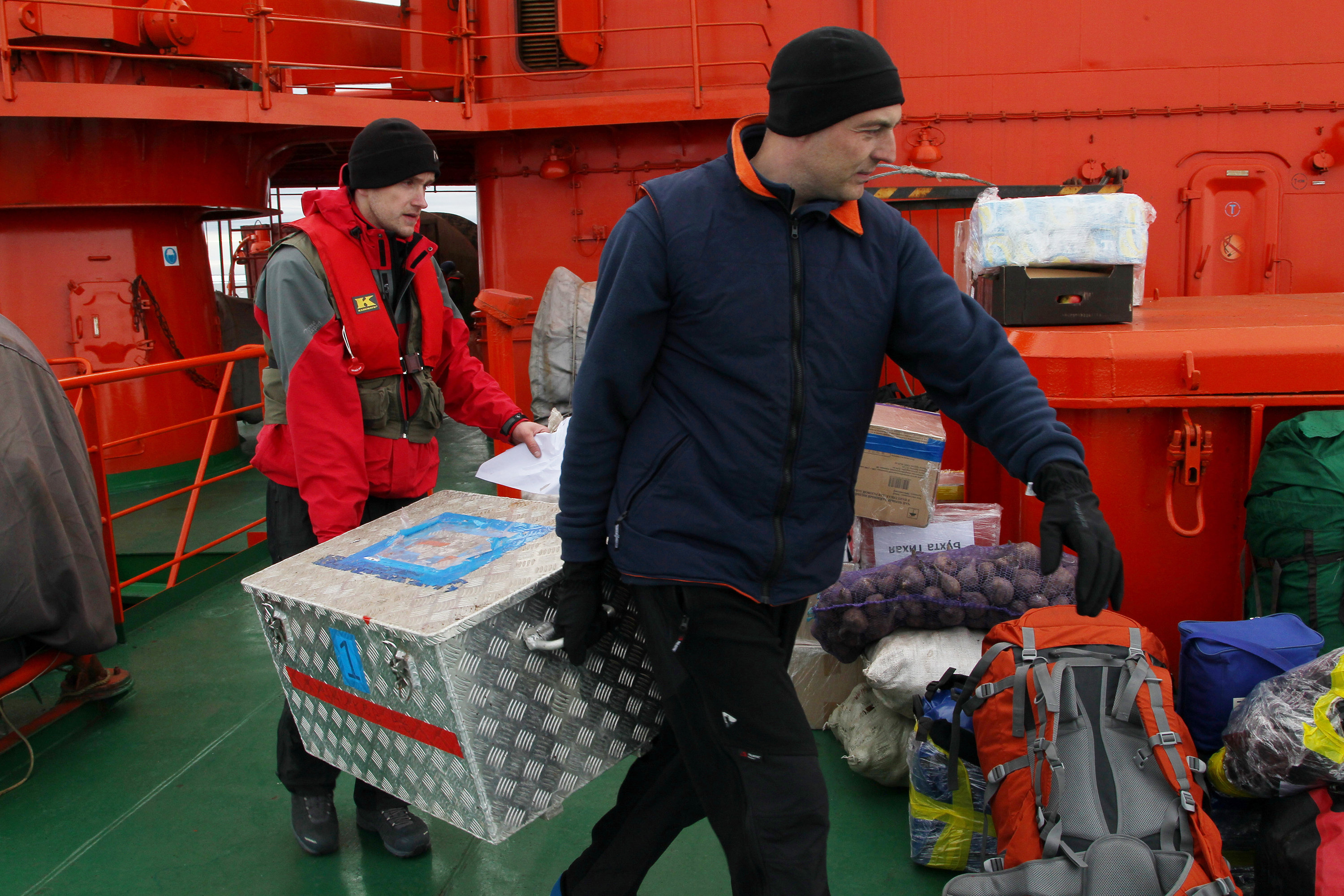 Preparing to land on Hooker Island ©RIA Novosti.Vera Kostamo
Of bears and humans

Things become simpler and more austere further up north. Brighter hues and people with better dispositions are typical of the areas near long-time sea-ice formations.

"We screen all prospective employees very carefully," Kunnikov said while scraping snow off a small courtyard in front of the house. "This place is so remote that you cannot take a tram back home, and you have to work for two or three months here. People must be physically and mentally strong," he added.

An educational environmentalist camp is to be organized here later this year by the national park's management together with the Russian Geographical Society. 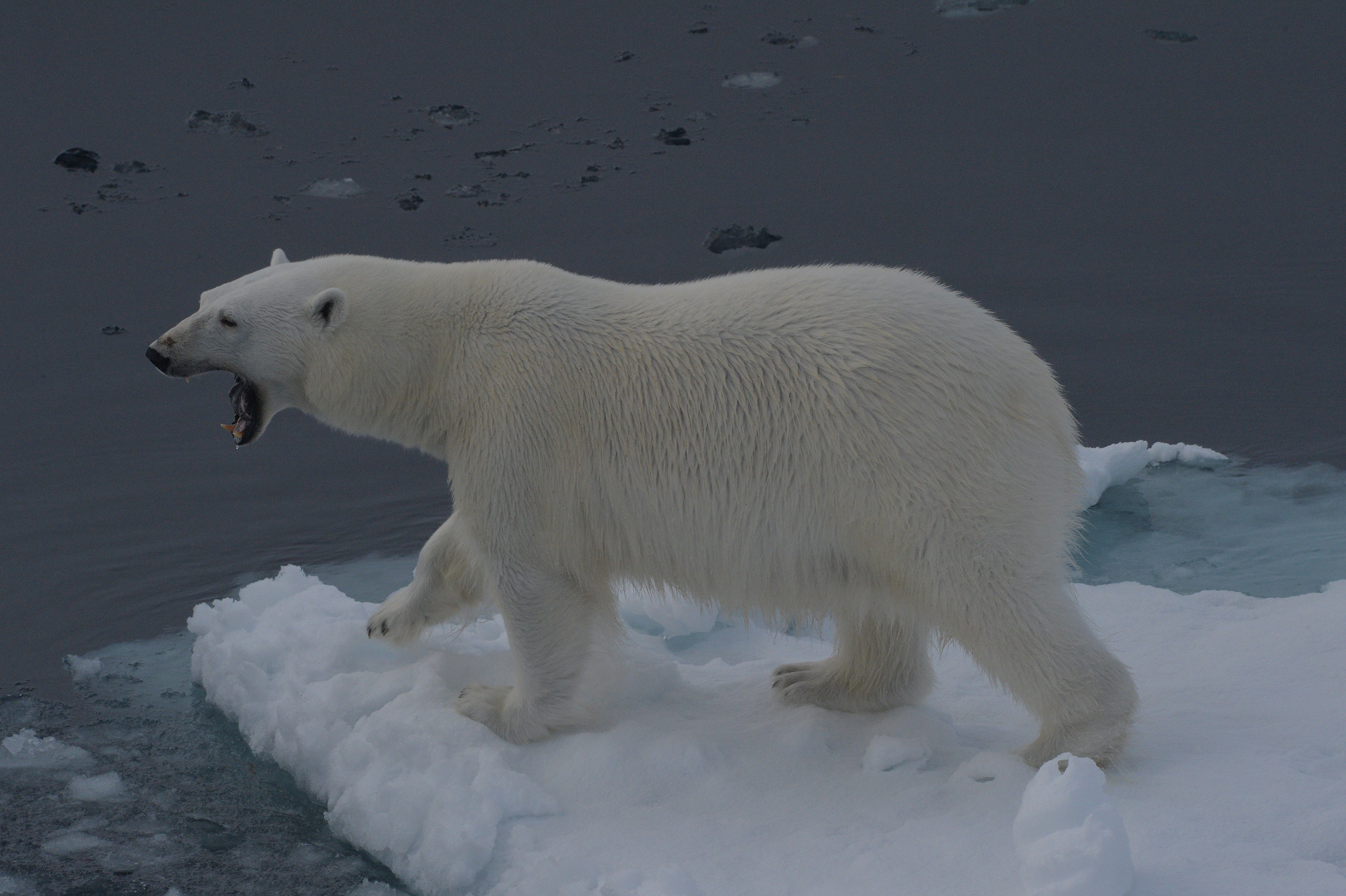 According to Kunnikov, everything is simple in Tikhaya Bay. "We work a lot, eat a lot and go to the steam-bath more often." The staff also has to share the station with polar bears.

The predators frequent the area if there is a lot of ice. Over 30 bears called at the station during the 2014 season. On average, 10–15 encounters are recorded each summer.

"You have to be extremely careful while moving about the station because visibility is limited here. This is why we need to maintain strict discipline. Fortunately, there have been no serious incidents, and no injuries to either bears or human beings."

"We had a lot of fun installing solar panels. It took us 45 days to realize that they generate enough electric power for 15–20 people."

What will Tikhaya Bay be like in the future? It will become a seasonal station, operating from early summer until mid-fall when the cruise season winds up. Five to ten people are planned to live and work permanently there, plus visiting research groups.

"We expect the number of tourists to increase. The Russian Arctic is the country's northernmost and largest national park. The Franz Josef Land Archipelago is the northernmost territory in Russia and Eurasia's most northerly landmass. Human psychology is quite unique because we are interested in all kinds of unusual phenomena," the national park's director Alexander Kirilov said.

The icebreaker enters the harbor, and the visitors will soon arrive. Kunnikov dons the fur hat with ear flaps that he can always be seen wearing in his photos from the last few years. This hat has become almost iconic.

"I don't want to be an icon," Andrei shrugged. "The situation just depends on how everything works out. It is like getting married: If you fall in love, you will stay together forever. We still get feedback from people who visited the bay in the early 2000s and saw the state the station was in several years ago. The situation was scary at that time, but everything is tip-top today."

As usual, the pea-soup fog will suddenly descend on the island in a few days' time, turning the bay into a quiet and misty void, and the station will resemble Noah's Ark caught in limbo.