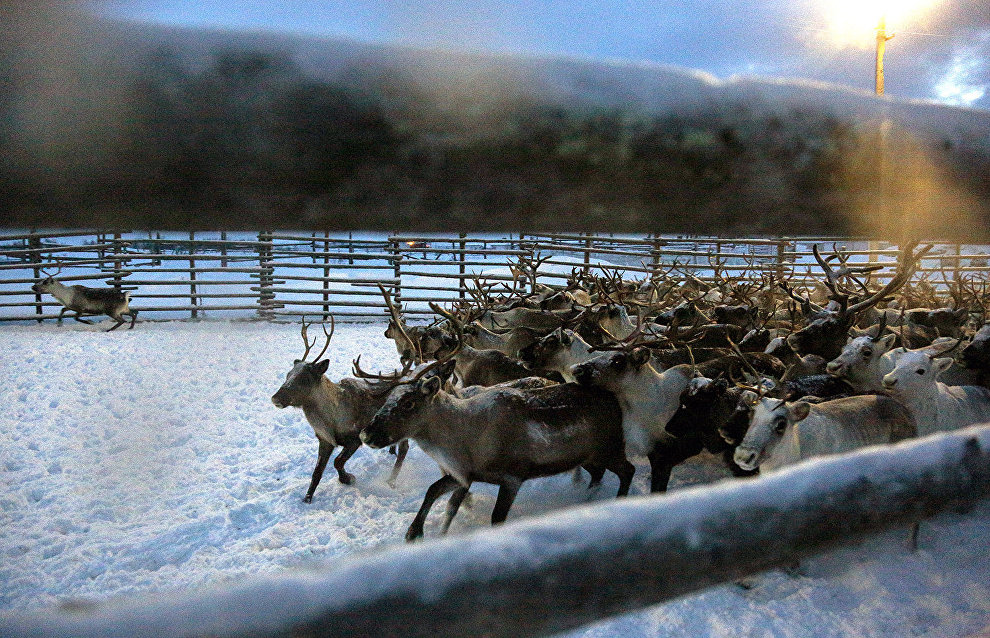 Reindeer breeders in Russia's Yamal-Nenets Autonomous Area have caught two wild reindeer and tagged them in order to track domesticated reindeer being lured away by them from local herds, the regional science and innovations department said on Wednesday.

In late autumn 2017, department sources said wild reindeer had lured away domesticated female reindeer in groups of 50-300 during the October-November mating season. This problem only affects a few local farms, they noted.

Last winter, satellite transceivers were delivered to the Ilebts community of small indigenous Northern ethnic groups, and it took reindeer breeders another month to locate and catch wild reindeer. The search was hampered by bad weather, with wild reindeer herds roaming the tundra at will. In late March, reindeer breeders caught two animals, tagged them with transceivers and set them free, department sources commented.

"Satellite transceivers will relay data to the Russian Center for Developing the Arctic, and this data will be used by Yamal reindeer breeding farms. It is necessary to monitor wild-herd migration routes to prevent wild reindeer from luring away their domesticated ‘relatives,'" they added.

Earlier, Alexander Yuzhakov, DSc (Agriculture), who deals with this matter, told RIA Novosti that there are few local wild reindeer and they have not been sighted in the tundra until now so it is unusual for them to lure away domesticated reindeer in the Yamal-Nenets Autonomous Area. He said it was impossible to shoot them because they are listed in the Yamal Red Data Book. But local reindeer farms would sustain extra losses if the wild reindeer population starts increasing. Insurance companies that could help compensate such losses are reluctant to do so because it is hard to obtain authentic data from remote herds.