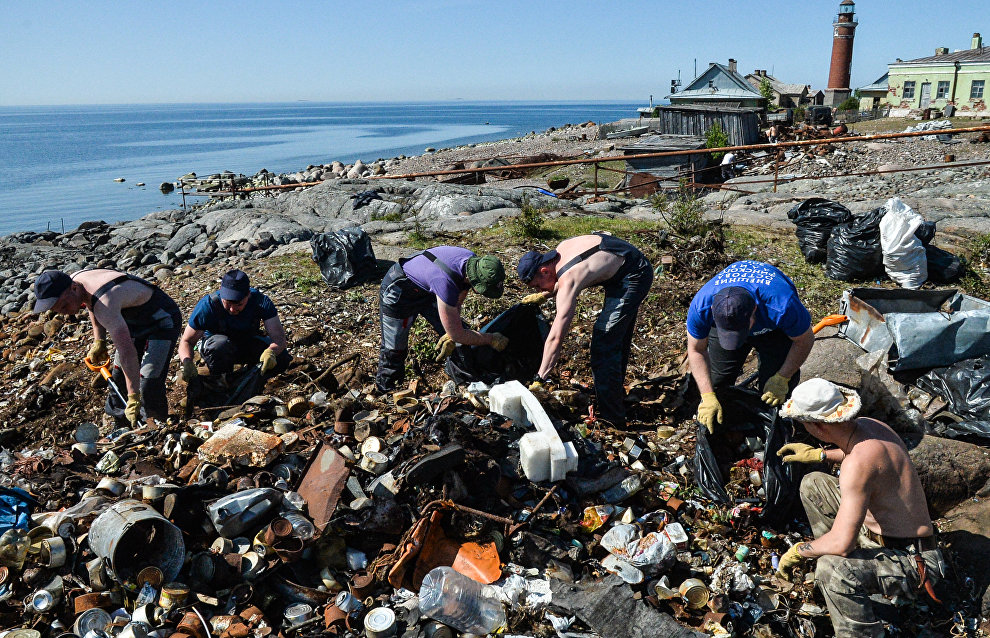 This summer, volunteers gathered 129 metric tons of junk from Vilkitsky, an island in the Kara Sea. Despite this massive job, it will take years before this clean-up process is completed, Yevgeny Rozhkovsky, who headed one of the shifts during the Arctic eco-expedition, explained.

The first stage in this large-scale clean-up job took off this summer, and was carried out in July and August. The island used to be home to a weather station, but now volunteers had to step in to help with cleaning up the territory from what had not been taken away by meteorologists. According to Rozhkovsky, the first task for his expedition was to evaluate the volume of scrap metal on Vilkitsky Island.

"This year we had two shifts of 15 people each, and a very clear understanding of our mission. The working schedule was very tight, and we knew what we had to do. We focused on the meteorological station and its grounds. Specifically, we dismantled several sheds and used the salvaged stuff as firewood, and lifted up the all heavy items, including multiple barrels full of  fuel, totaling 129 metric tons," he said.

The first shift cleaned up 35 metric tons of junk, and the second shift took care of the rest, Rozhkovsky pointed out, adding that the difference was due to the fact that during the first shift the rubbish was collected up by hand. As the first shift neared its end, ship Mikhail Somov arrived carrying a tractor, which made work much easier. All in all, environment protection activists found more than 2,500 barrels, with 800 of them still full of fuel. Volunteers prepared them for future removal from the island. Under the current plan, all scrap metal structures are to be dismantled and transported from the island to the mainland part of the Yamalo-Nenets Autonomous District for recycling.

It is believed that all this junk started to accumulate on the island in mid-1950s, when the weather station opened there. It now operates as an unmanned automatic weather observation station. "A military base was created a little later, which was not uncommon for the Soviet Arctic. It was customary back then to supply more fuel than the meteorologists actually needed. In fact, there was too much of it, and the military received huge volumes of fuel too," Rozhkovsky said.