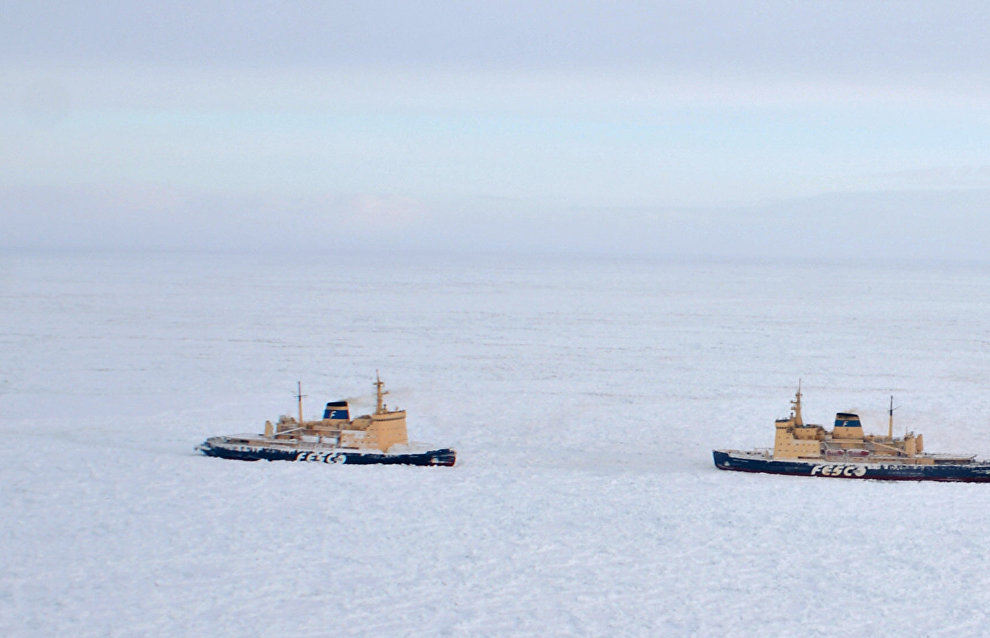 A convoy of two bulk carriers and two icebreakers which got stuck in the ice off the coast of the town of Pevek on Chukotka Peninsula has food and fuel reserves, the press service of the Russian Emergencies Ministry's Directorate for the Chukotka Autonomous Area informed TASS news agency today.

"According to the captain of the Kapitan Dranitsyn vessel, the situation is not critical. There is no tension among the crew. There are food and fuel reserves. After getting more information about ice conditions the convoy will proceed on the route," the statement reads.

A convoy of two bulk carriers, Johann Mahmastal and Sinegorsk, operated by Rosmorport, and escorted by Kapitan Dranitsyn and Admiral Makarov icebreakers, is stuck off the coast of the town of Pevek in the Chukotka Autonomous Area due to difficult ice conditions which measure ten points on a ten-point scale, TASS reports. The thickness of ice in the East Siberian Sea near Cape Shelagsky exceeds one meter. Ridged ice is 2.5 meters thick.

The Emergencies Ministry reported that a Mi-8 helicopter operated by ChukotAVIA will be dispatched in the morning of January 18 from Anadyr Airport to explore the ice cover of the East Siberian Sea. Today takeoff was hindered by weather conditions near Ayon Island. The convoy remains at anchorage near Cape Shelagsky.

The vessels arrived in Pevek from Arkhangelsk along the Northern Sea Route in early January. They are delivering construction materials to the Arctic Region to build a pier for the Akademik Lomonosov floating nuclear power station. The station will be transported to Chukotka via the Northern Sea Route and assembled there in 2018.