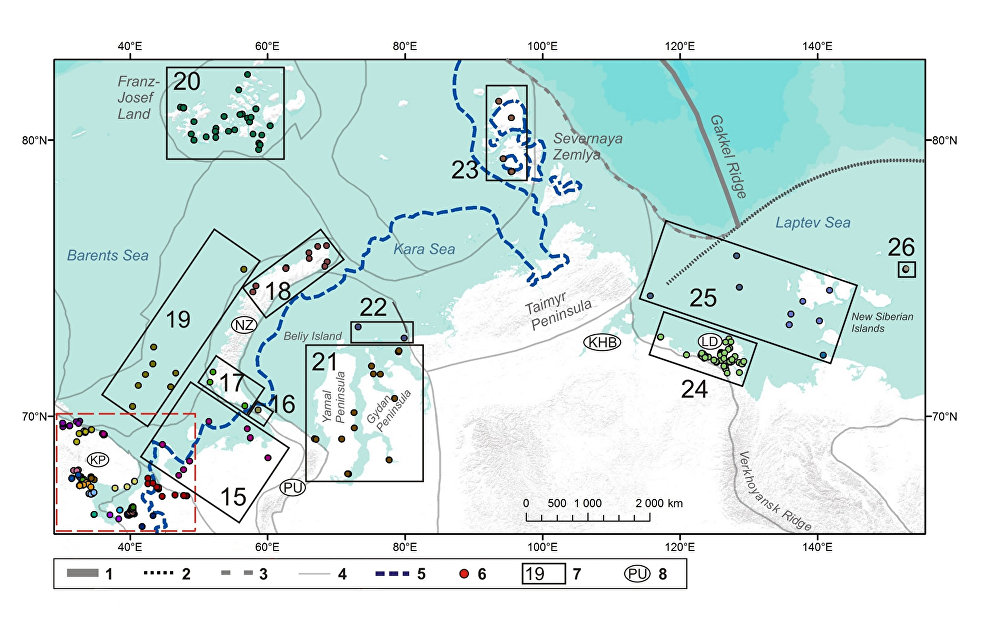 Scientists from the Faculty of Geography of Lomonosov Moscow State University have compiled and registered a database of postglacial sea level changes in the western and central parts of the Russian Arctic since the Last Glacial Maximum 25,000 years ago.

The database includes historical data and the results of field studies conducted by the Geoecology of the Northern Territories laboratory of the MSU Faculty of Geography, such as the location of geological and geomorphological indicators of sea level changes in the period under review. The study includes information about 630 sites of the sea levels recorded in the past period on the coast of the White, Barents, Kara and Laptev seas.

“These indicators, that is, the geological and geomorphological data about sea level changes, are divided into three groups. First, there are precise sea level indicators, which show the water’s edge in the past. Second, there are continental indicators of shoreline conditions, which can influence the possible sea level from above the surface. And third, the marine indicators of relatively deep-water conditions that limit the sea level below the surface. The database comprises 371 precise sea level indicators, 107 continental and 152 marine indicators. The territorial sites are divided into 26 regions with different scenarios of sea level changes,” explained Alisa Baranskaya (Ph.D. in Geology), a research fellow at the Geoecology of the Northern Territories lab and the author of the project.

According to the researchers, information about sea level changes in the Arctic over the past 25,000 years, that is, during the late Pleistocene and Holocene epochs, is vital because it can be used to adjust the existing glacioisostatic compensation models based on field data collected in other parts of the world, such as North America and Barbados. Glacioisostasis and glacioisostatic movements are extremely slow vertical and horizontal movements of the earth’s surface in the regions of the ancient and recent glaciation caused by the deflection of the lithosphere under the weight of glaciers and its subsequent isostatic elevation when the burden is reduced due to the melting of ice. Computer models of these processes can help reconstruct past changes in sea levels across the world and predict future changes.

In 2020 and 2021, researchers from the MSU Faculty of Geography will compare their database of sea level changes in the western Arctic to the leading international models of glacioisostatic compensation and innovative 3D models, which include spatial changes in the parameters of the Earth’s lithosphere and mantle.

The available database will be complemented with information collected during field studies, such as dating results, subsurface data, conclusions about the origin and stratification of marine and continental sediments, paleoreconstruction, as well as lineament and morphostructure maps. Taken together, this can help researchers identify sea level changes in the problem areas of the Russian Arctic during the Pleistocene and Holocene eras. They will focus on the shoreline of the Kara Sea, the area of the presumed periglacial compensation deflection. Information about it is extremely important for understanding the glacioisostatic processes in the Arctic.

The study titled “Sea level changes in the Russian Arctic in the Late Quaternary Period: amplitudes, factors and mechanisms” was conducted as part of the 20-35-70002-Stability Project of the Russian Foundation for Basic Research (RFBR).