Home
Intrepid Soviet explorers spend 376 days on an ice-floe
This is a story from the diaries of Mikhail Somov about the North Pole (SP) 2 expedition and how Soviet polar explorers found themselves north of the Bering Strait. At that time, the region remained little-studied, and scientists knew nothing about local ice-drift patterns
©RIA Novosti

There were plans to land the SP-2 expedition on an ice-floe in March–April 1950. Expedition members were expected to accomplish two main tasks. First, they had to continue oceanographic, geophysical and aerometeorological research. Second, they were supposed to provide the Northern Sea Route Administration's meteorological and ice-reconnaissance services with updates.

The expedition's main gear, equipment and foodstuffs were stockpiled in Moscow, with Leningrad providing research devices. In all, 16 people were to be airlifted to the station. A plane flew six people and four metric tons of freight to the ice-floe in the early hours of April 1, with temperatures hovering around minus 38 degrees Celsius.

The three-meter-thick ice-floe, with an area of several square kilometers, was to accommodate polar explorers for many months. Members of the first group installed a radio transceiver and broadcast the first weather report as early as 7 pm. 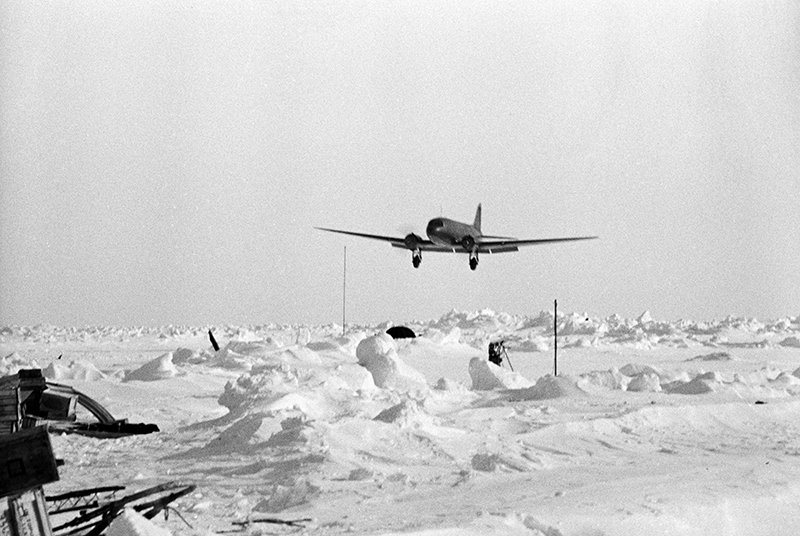 On April 4, when work to set up the station was in full swing, the ice-floe cracked near the camp. Although the incident did not threaten the explorers' lives, it became clear that the crack would not solidify into a frozen mass, and that this ice-floe section might turn into a large patch of ice-free water in summer. It was decided to move the station to a safer area, 250 meters closer to the ice-floe's central section.

This was made possible by a pack of sled dogs, airlifted from Wrangel Island. The dogs hauled the freight, and expedition members carried the tents.

Everyday life at a polar station

The station had ten tents, with each of them accommodating two to three people. Each tent had light-weight folding beds, tables, stools and wash-stands. Some tents had radio sets with loudspeakers broadcasting the news from Moscow, as well as telephones for communicating with other areas of the camp. All the habitation tents were later fitted with lamps.

The mess-room tent featured an improvised cigarette-box table where all expedition members could sit, as well as two gas ranges for cooking food

An iron drum was used to melt snow and obtain drinking water. At first, the drum was located outside, near the tent and heated by a large aircraft lamp. Another drum, suspended two meters above the ice, fed the lamp with gasoline. The water thus obtained flowed into the kitchen via a rubber hose insulated with reindeer fur. However, the lamp could not operate for prolonged periods of time. In summer, expedition members started scooping up fresh water from small melt-water pools. When winter arrived, they tried unsuccessfully to invent other snow-melting devices.

At first, the station did not have enough radio transceivers. On July 12, a kerosene kitchen burner started a fire that burned down the tent housing the main transceivers as well as the stand-by ones. Both systems were damaged, preventing expedition members from communicating with the mainland Soviet Union. All attempts to establish communication with a polar station on the mainland proved unsuccessful. Senior transceiver operator Kurko and aerologist Kanaki were up to the mark, displaying their professionalism and inventiveness. They worked for 24 hours without respite and assembled another transceiver virtually from scratch.

This transceiver made it possible to communicate with Cape Schmidt until August 15 when a plane air-dropped new equipment. 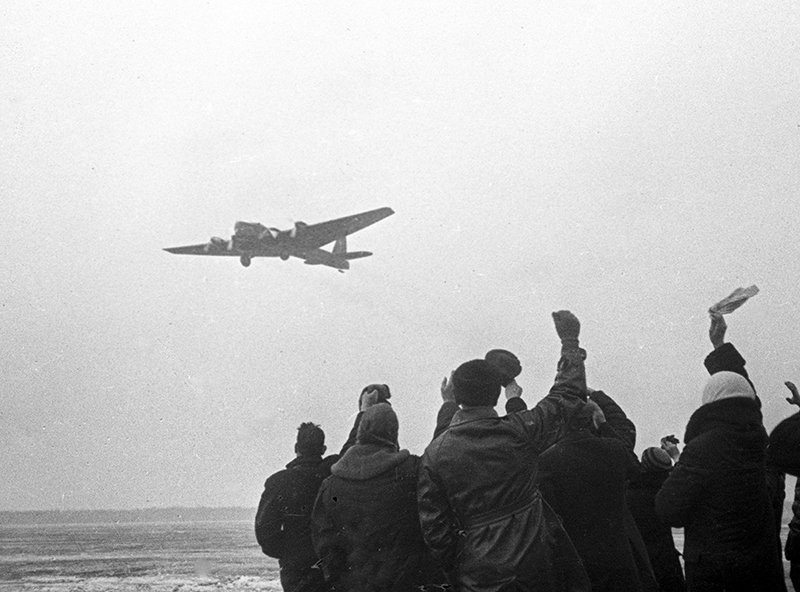 People see of an airplane leaving for the North pole ©RIA Novosti.Vladislav Mikosha
Dealing with a major threat

The camp always faced the dire prospect of the ice-floe cracking apart. Two rubber dinghies that held five to six people each were kept in a constant state of readiness. They carried a pump, oars, a grappling hook and a sufficiently long and durable line.

In summer, the dinghies shuttled between the airfield and the camp, which were divided by a wide section of ice-free water. Additionally, expedition members built a raft using eight empty drums bound by a steel cable and covered with a wooden "deck."

They prepared a sled with emergency food rations and equipment, including a tent, reindeer skins, sleeping bags, warm clothing, a kerosene stove, 20 liters of kerosene, a saucepan, a kettle, chocolate bars, canned cocoa, milk and meat, crackers, tea, sugar, some other foods, a portable manually operated transceiver, grappling hooks, axes, spades and shovels, ropes and other equipment, that could sustain 16 people for 10–20 days on an ice-floe. They covered these provisions with tarpaulin.

To reduce risks, the camp was made as small as possible. The 1950–1951 drift confirmed that this was an appropriate choice. When the ice-floe disintegrated in February 1951, the camp remained intact. 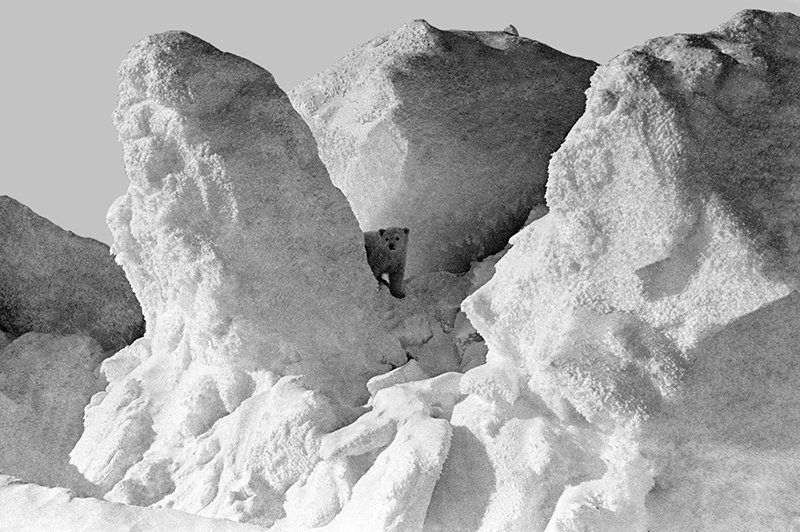 Polar bears showed up, posing a major hazard. In early June, a bear sneaked up during a blizzard and pounced on team members Dmitriyev and Kanaki who were standing near the galley. Dmitriyev barely managed to reach the mess room and to hide behind a tarpaulin "door." For several seconds, the ferocious and hungry bear confronted Dmitriyev standing just 50 centimeters away from him, separated by nothing but the fluttering tarpaulin. The bear would have hit the tent with his paw and sealed the poor man's fate, but Kanaki mortally wounded the beast before it could deal the crushing blow.

After the first attack, it was decided that anyone who spotted a bear would receive its skin. From that day on, all bears were always sighted on time

Life was most comfortable on the drifting ice during March, April and May. The weather was fine, with plenty of sunshine; and temperatures hovered at minus 30–40 degrees in March, gradually rising to minus 10–15 degrees in May.

Snow and ice started melting in mid-June, and this continued throughout July and the first two weeks of August. The ice accumulated plenty of water inside melt-pools. During the first melting period, the entire ice-floe was covered with water-soaked snow concealing some rather deep puddles. It became hard to move about, and everyone had to wear rubber boots.

Many birds descended on the camp in summer. First, the snow bunting arrived, followed by seagulls and ducks. Seals often showed up inside ice-free water patches. We even saw a sea hare. Two large animals once jumped out of a long and narrow patch of water. 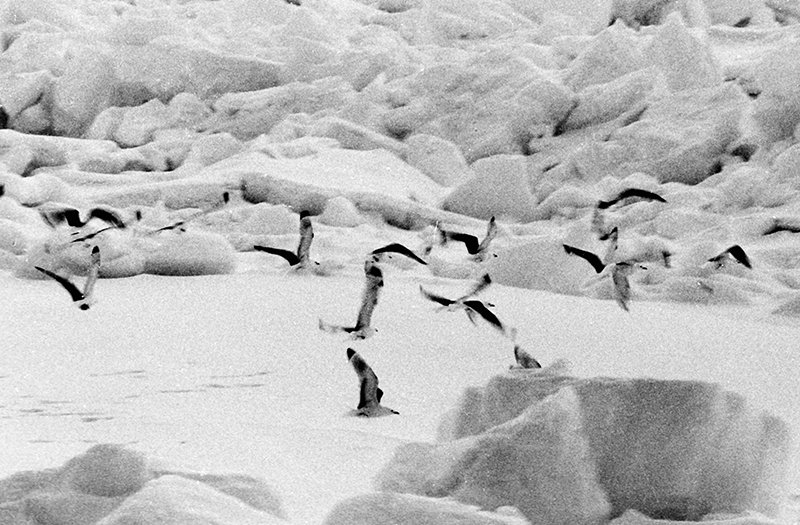 One day, Chukanin, Yatsun and I were patrolling the station's ice-floe when a strange sound attracted our attention. A small white vapor cloud then rose above an ice-free water patch behind the hummocks. We ran toward the water patch but saw nothing. The sound repeated itself some time later. Once again, a vapor cloud formed above the water patch, and two animals appeared, with 1.5-meter-wide steely-colored backs. We could clearly see their vertebrae. The backs remained above the water for just one or two seconds and then disappeared. We could not see any other parts of their bodies.

After that incident, we began to watch the water patch closely and we installed camera traps, but those animals that were, doubtless, whales never came back.

Members of our team started working hard in the run-up to the winter season. First, it was decided to make the camp even more compact and to relocate most of the tents. Second, all the habitation tents were covered with snow "bricks" and thus insulated. Third, we built a runway on a hilly pack-ice formation near the camp. We had to chop off the tops of some hills, and smooth out other unevenness.

Living conditions got worse, with the polar night and low temperatures descending on us. In January, average monthly ambient-air temperatures were minus 40 degrees Celsius, sometimes dropping to minus 50 degrees

Low temperatures were often supplemented by wind gusts. It was particularly hard to work out in the open in such weather. Unprotected faces immediately began to suffer from frostbite.

Darkness, cold weather and hoar-frost settling down on antennas, masts and their guy-ropes hampered research observations. There was so much of this hoar-frost that it repeatedly broke radio-transceiver masts, causing them to fall over. 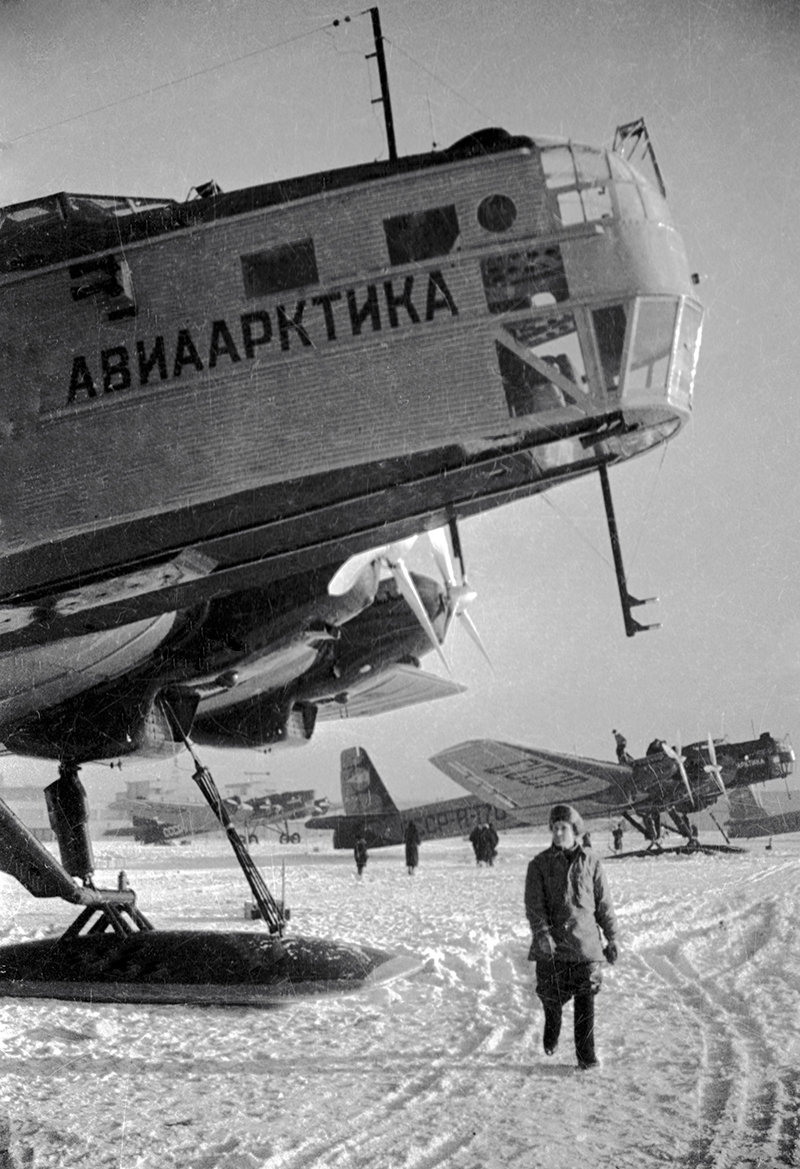 Technicians preparing airplanes for flight to the North pole ©RIA Novosti.Ivan Shagin
Change of the guard

On October 25, two planes took off from the mainland and flew toward the drifting station. Several hours later, a crack cut the runway in two.

Air crews were notified of the problem while still in midair and landed safely on a large fragment of the runway. This became the first landing on Central Arctic sea-ice formations during the polar night.

The ice-floes started moving once again in late October. Fragments of the runway were reassembled, creating a long patch of hummocks. As soon as the ice stopped moving, the hummocks were removed; the crack was filled with ice fragments and water.

On October 31, a heavy-duty four-engine plane landed there, delivering 4.5 metric tons of freight

The station's research programs were curtailed during the second part of the drift, and seven people left for the mainland. Geophysicist Milyayev and Dr. Volovich arrived at the station, with the latter also acting as cook. Therefore 11 people remained there prior to the winter season.

Before Dr. Volovich arrived, everyone took turns cooking. After he showed up, the station's researchers were exempted from difficult galley duty. But the new cook turned out to be even less professional than other members of our team who had already become accustomed to such work. One cannot help but note Dr. Volovich's true bravery and self-control, as he toiled during the extremely difficult winter season without any mutterings of discontent.

He would start working at the galley when temperatures dropped overnight to minus 30–40 degrees and a few hours later, gradually reached minus 8–10 degrees. 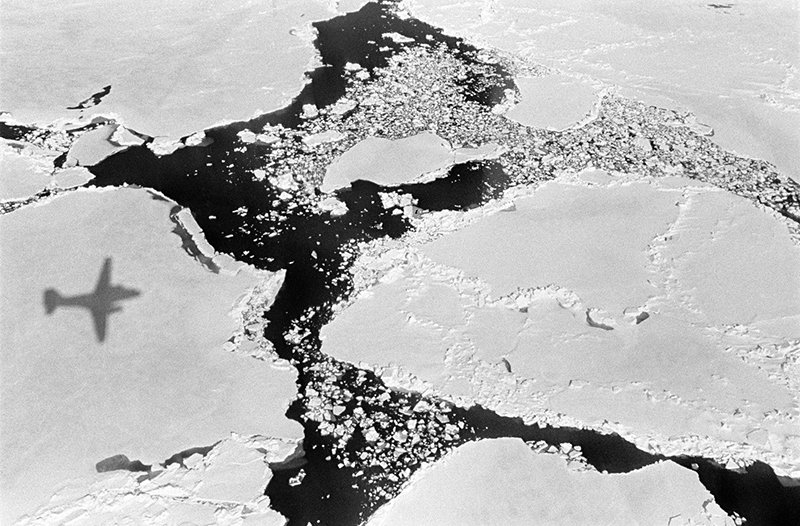 The plane flies over the Arctic ©RIA Novosti.Fred Grinberg
Pitching new camp and ending the expedition

In mid-February, the camp was located on an ice fragment measuring 30 by 40 meters. Although the ice-floe had stopped moving, it was too dangerous to stay inside snow-covered tents there because the compression might resume, catching those asleep by surprise. All the expedition members stayed inside two tents that were relocated to a nearby ice-floe. They also cooked there.

Everyone slept on reindeer skins on the "floor." Clear weather set in at night, and the wind abated. Temperatures dropped to minus 42–43 degrees. Although the gas range burned merrily all night long, it was very cold inside the tents

On February 19, most consignments were taken to another location. It was only possible to partially remove our habitation tents, to take them across the ice cracks and to load them inside a vehicle. Others stuck fast and could not be shifted.

Only habitation tents were installed at the new camp, with four people staying inside each of them. All others settled down inside the transceiver tent, taking turns to sleep on the two beds. The "canteen" was installed only a month later.

Naturally, living conditions here turned out to be much harder than those at the good old home-like camp. But people hardly noticed because the expedition was coming to an end. Everyone wanted to conduct observations as soon as possible and to compensate for delays caused by bad weather.

Indeed, we completed all projects as planned. On April 11, 1951, all expedition members were taken off the ice-floe and airlifted to the mainland by a polar aviation unit.

This is not the end of the story of the SP-2 drifting research station because the abandoned ice-floe continued its journey. On April 28, 1954, an air crew spotted the ice-floe fragment and it was meticulously inspected later on

Scientists obtained a lot of interesting data from that fragment. But even more valuable material was provided by new drifting stations, which carried on the Central Arctic research effort.

Excerpts from the chapter 376 Days on a Drifting Ice-Floe from the 12 Heroic Feats collection.
Hydrometeorology Publishers, 1964