Fridtjof Nansen
© Wikimedia Commons
A drifting station is a scientific research station on a drifting ice floe in deep-water parts of the Arctic Ocean.

Norwegian polar explorer Fridtjof Nansen was the first to come up with the idea of establishing research stations on drifting ice floes in the central Arctic after returning from his famous expedition (1893-1896) when the first drift was carried out onboard the Fram ship frozen in heavy packed ice. 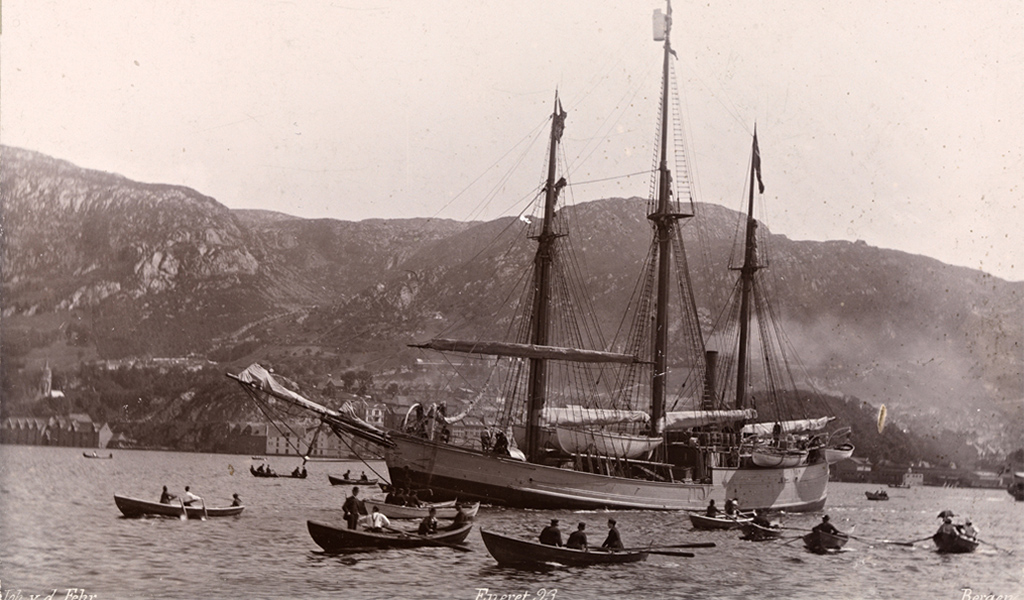 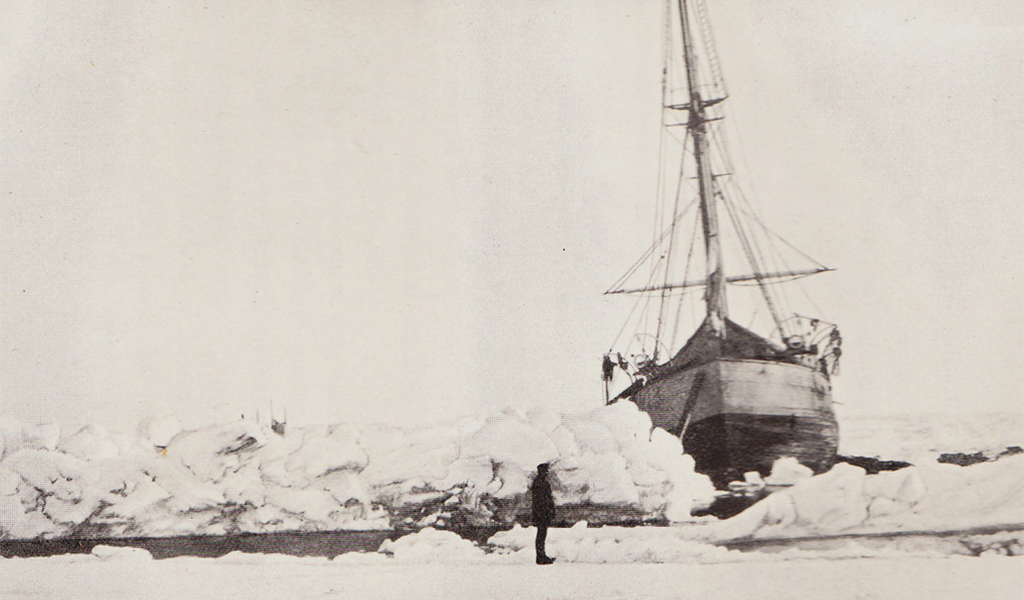 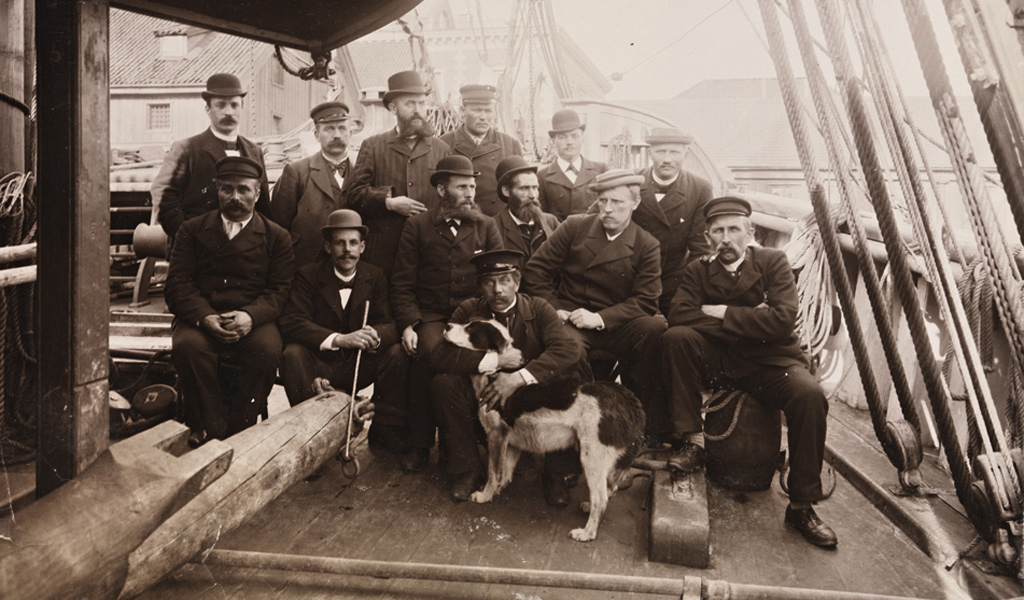 The Fram team.   © Wikimedia Commons
Vilhjalmur Stefansson
© Wikimedia Commons
Canadian polar explorer Vilhjalmur Stefansson made the first attempt to set up a drifting station. In March 1918, an expedition led by Starker Storkerson camped on an ice floe with an area of over 400 sq km several hundred miles from Alaska. During the drift, the polar explorers conducted hydrological and meteorological observations. In November, the expedition safely returned to the mainland.
First
Soviet Station
In the Soviet Union, the idea of setting up a station near the North Pole was advocated by Academy of Sciences Member Otto Schmidt and Professor Vladimir Wiese (Vize), who embraced and developed Nansen’s ideas.

The first plan of establishing a polar research station, proposed by Vize, was considered back in 1929. However, no practical steps were taken in this area until 1935. On May 1, 1937, airplanes of a high-latitude air expedition landed on an ice floe near the geographical North Pole, delivering the station team and supplies.

On May 1, 1937, airplanes of a high-latitude air expedition landed on an ice floe near the geographical North Pole, delivering the station team and supplies.

“We congratulate each other and admire the expert flight and landing. I can't believe we're at the pole. I can't believe humankind’s age-long dream has come true. However, the general excitement, cheering and smiling eyes again confirm that the landmark event has happened,” Ernst Krenkel wrote about landing on the ice floe.
Ivan Papanin
(station chief)
He was awarded the title of Hero of the Soviet Union for successful scientific research activity and station management
Vesyoly
(polar husky)
This dog performed round-the-clock duty protecting the station from polar bears. The dog was known for its cheerful and friendly disposition, as described in detail in Papanin’s diaries
Tarpaulin tent
Members of the Papanin expedition lived in a winterized tent, developed at the Moscow-based Kauchyuk plant and tailored for Arctic conditions. Its frame was made of collapsible aluminum pipes. Its walls were made of tarpaulin with two layers of eiderdown in between. The floor was made of inflatable rubber. There was no stove in the tent. It was heated by a large kerosene lamp.
Pyotr Shirshov
(oceanographer)
He refuted the hypothesis regarding the absence of life in the polar latitudes of the Arctic Ocean
Diet
The polar diet was developed by the institute of food engineering, taking into account not only the savory and nutritional characteristics of foodstuffs, but also their weight. Expedition food supplies – an assortment of dry products for 40 man/days – were stored in large tin cans.
Ernst Krenkel
(radio operator)
After the North Pole expedition, he was the head of the Polar Stations and Communication Administration at Glavsevmorput (an agency that oversaw operations on the Northern Sea Route)
Yevgeny Fyodorov
(geophysicist, meteorologist)
The day the station opened, on June 6, 1937, he measured the sea depth on the Northern Pole at 4,290 meters
Archival video from the North Pole-1 station.
© ria novosti
The North Pole station operated in the Arctic for nine months (274 days) until February 19, 1938, drifting over 2,000 km. The Taimyr and Murmansk icebreakers evacuated the explorers from the ice floe beyond the 70th latitude, several dozen kilometers off Greenland’s coast.

On average, 600-650 ocean depth measurements are taken, 3,500-3,900 meteorological observations are made, 600-650 pilot balloons carrying radio sensors are launched, and 1,200-1,300 seawater temperature measurements and samples are taken for chemical analysis at the station each year. Magnetic, ionospheric, glacial and other observations are also conducted. Regular determination of the ice floe’s astronomical coordinates provides data on the direction and speed of its drift.

The Il-14 airplane as part of the North Pole-9 expedition lands on a small ice floe in the Arctic Ocean.   © ria novosti

A spring night at the North Pole-13 station.   © ria novosti

Divers at the SP-22 station preparing to submerge.   © ria novosti

Member of the North high-latitude research expedition in a Buran snowmobile. The SP-25 station.   © ria novosti

Alexander Chernyshov, head of the SP-28 drifting station.   © ria novosti
Important physical and geographical discoveries were made during the expedition as valuable conclusions were made regarding the patterns and interconnection of processes in the polar region of the earth’s water area and atmosphere.