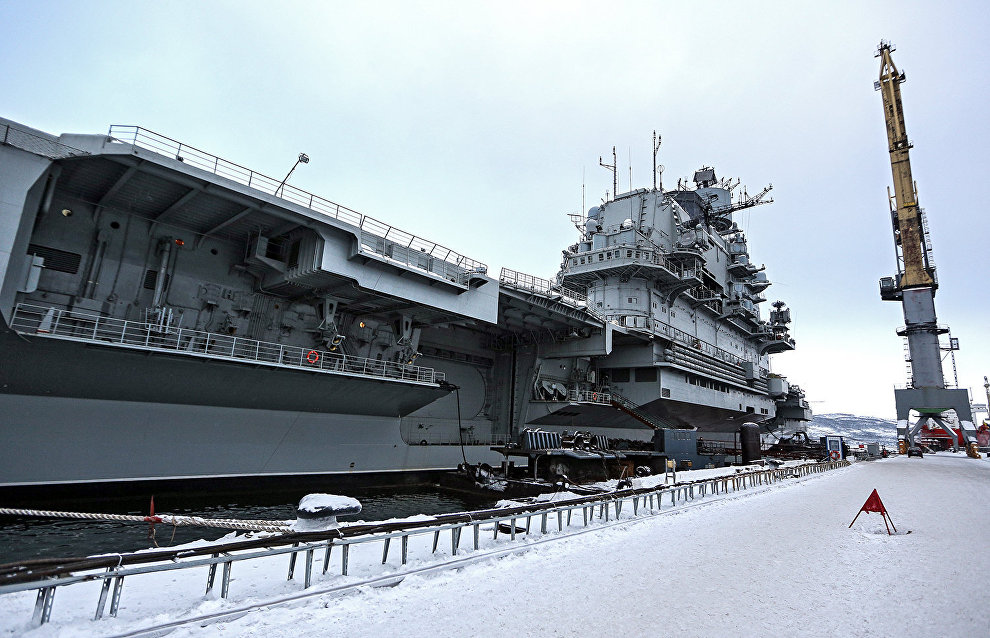 Admiral Kuznetsov arrives at shipyard near Murmansk after dock accident

Aircraft carrier Admiral Kuznetsov has arrived for stationing at Shipyard 35 near Murmansk after a floating dock accident at Shipyard 82, RIA Novosti reports according to the Zvyozdochka Ship Repairing Center (the aircraft carrier's maintenance contractor).

The aircraft-carrying cruiser moored at the shipyard pier at six in the morning. Maintenance experts are currently inspecting the ship's hull.

"We have so far not been able to put our finger on the problem. The incident will not affect the maintenance period," a spokesperson told the news agency.

Earlier, a representative of Shipyard 82 explained that due to a power cut in Murmansk, tanks of one of the largest floating docks, PD-50, took on water dragging the dock down. Admiral Kuznetsov was being serviced in the dock but was not damaged. There were no casualties; however, four workers sustained hypothermia.

PD-50 was built in 1980 in Sweden for the Soviet Navy. It was designed for maintenance of heavy-tonnage surface ships and submarines, including Admiral Kuznetsov and nuclear-powered Kirov-class battlecruiser Pyotr Veliky. According to the list of Shipyard 82 affiliates, 0.0001% of its shares belong to the state (Defense Ministry) while the rest of the shares belong to a Rosneft subsidiary.

Admiral Kuznetsov has been undergoing scheduled dock maintenance at Shipyard 82 since mid-September. The job is expected to last until 2021.