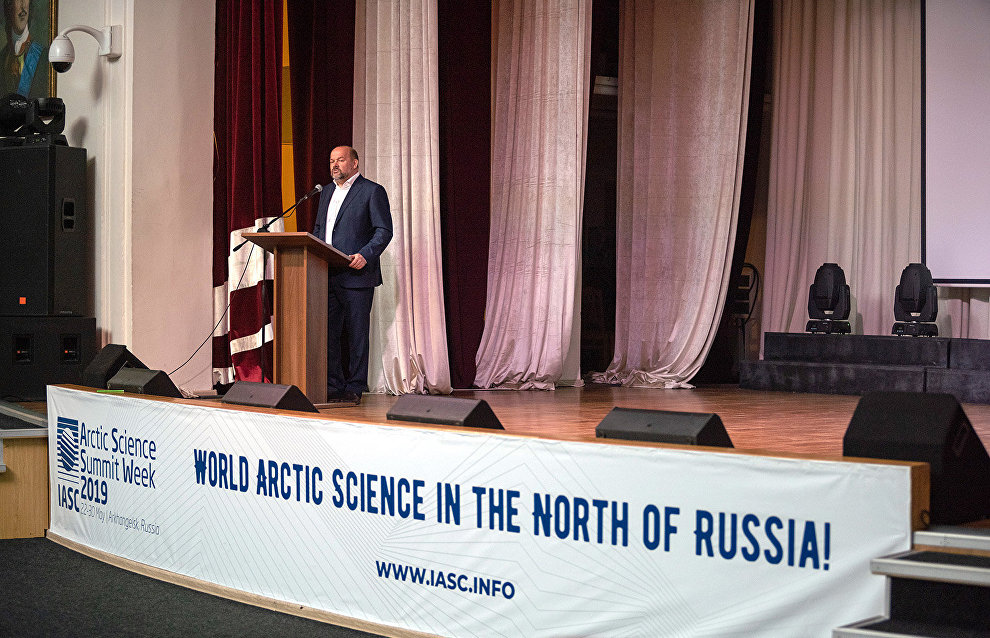 Participants in the Arctic Science Summit Week met with Governor of the Arkhangelsk Region Igor Orlov on May 25 on the fourth day of the event. In addition, the scientists showed the results of their research during a poster session: summaries of their works with diagrams and pictures were put up on display stands in the university lounge.

Speaking at a plenary meeting, Igor Orlov described the summit as a key event for outlining the strategy for developing Russia's Arctic and the entire Arctic region in the future.

"The area must be further developed on the basis of accurate and verified data provided by the academic community," Orlov said, referring to the importance of the summit. "Today we are considering new logistic routes and the development of deposits on the mainland and continental shelf. To implement investment projects, we need new scientific data, and these are precisely the tasks that the International Arctic Science Committee (IASC), which is widely represented in Arkhangelsk, has set for itself. We're looking to this academic forum to secure Arkhangelsk's status as a key city for developing the Arctic."

The implications of Arctic development and the impact climate is having on the local population are not the only issues covered by the scientists in their reports. For example, Rebecca Hewitt of Northern Arizona University spoke about how climate change was affecting coastal areas, islands and forests. Scientists in Arizona found that there is a connection between rising annual average temperatures and the increasing number of forest fires to the north of the Arctic Circle.

Scientists from Northern Arizona University have concluded that climate change has a direct impact on the number of forest fires because annual average temperatures are increasing every year. The causes of fires are the same as before: these are largely lightning storms and partly human activity but the increasingly warmer weather is creating favorable conditions for the emergence of natural phenomena that cause fires.

Rising annual average temperatures and melting permafrost are affecting human activity in high latitudes; however, Vice President of the IASC Vladimir Pavlenko believes climate change does not have a direct impact on people's health in high latitudes. Of the same opinion is Svein Harald Sonderland, a research adviser at the Norwegian Kings Bay Company, which provides basic supplies to the town of Ny Alesund on Spitsbergen.

At the same time, this process is having a considerable impact on human activity and the condition of infrastructure. According to Pavlenko, the landscape is changing, as well as species diversity in some areas.

The Arctic Summit Science Week is taking place in Arkhangelsk, on the initiative of IASC, on May 22-30 and is being attended by 450 scientists from 29 countries.