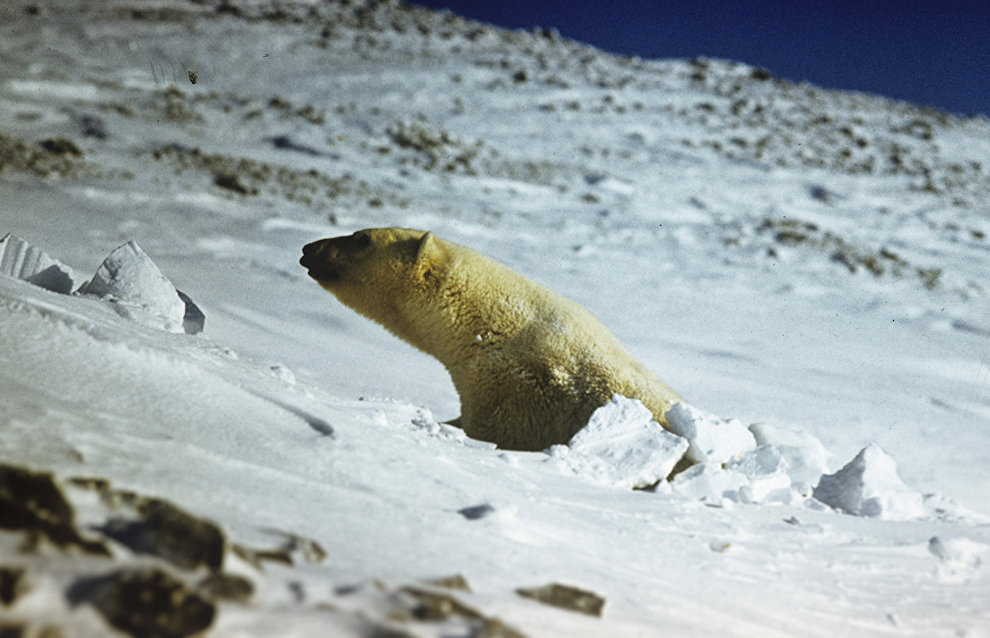 Experts are trying to find out the site where the video with a polar bear on whose side unknown people painted the word ‘T-34' (the name of a Soviet tank) was taken, Anatoly Kochnev, senior research fellow at the laboratory of mammal ecology at the Institute of Biological Issues of the North of the Russian Academy of Sciences' Far Eastern Branch, told RIA Novosti.

On Monday, WWF employee in Chukotka Sergei Kavry released a video filmed from a car. The video features a polar bear walking along the road; the black letters say ‘T-34' on the animal's side. Kochnev commented on the material and is trying to find out where it was taken.

"It is still unclear where this video was filmed. I don't recognize this place in Chukotka. This year, there were accidents involving polar bears on Novaya Zemlya, maybe some measures were taken, such as capture and immobilization, and since this job is not done by scientists, but by ordinary people, there could be those who pulled this ‘prank.' On Facebook, I called for an employee of the Severtsov Institute of Ecology and Evolution of the Russian Academy of Sciences and the Wrangel Island nature reserve in Chukotka. Maybe it happened there," Kochnev said.

He noted that if it is ordinary paint, it will wash off in no time at all.

"In the 1960s, researchers on Wrangel Island tried to paint marks on polar bears and wrote numbers on the animals' sides. But the numbers washed off when the bears went swimming. However, it is hard for a bear to go hunting if it has something painted on its side," he pointed out.

Kochnev also noted that the attitude to polar bears triggers a question. "This video was initially sent by a Chukchi hunter. They want to hunt polar bears, but environmentalists call them poachers and so on. At the same time, hunters have much more respect for the animals than those who dared write on the bear's side. Such an attitude harms the animals," Kochnev said.

On February 9, 2019, the government of the Arkhangelsk Region declared a state of emergency on the Novaya Zemlya Archipelago due to an unusual aqccumulation of polar bears around places where people are living. Fifty-two polar bears were spotted near the village of Belushya Guba; they even entered the village. There have also been cases of aggressive behavior such as attacks on humans; the bears also entered houses and service facilities.