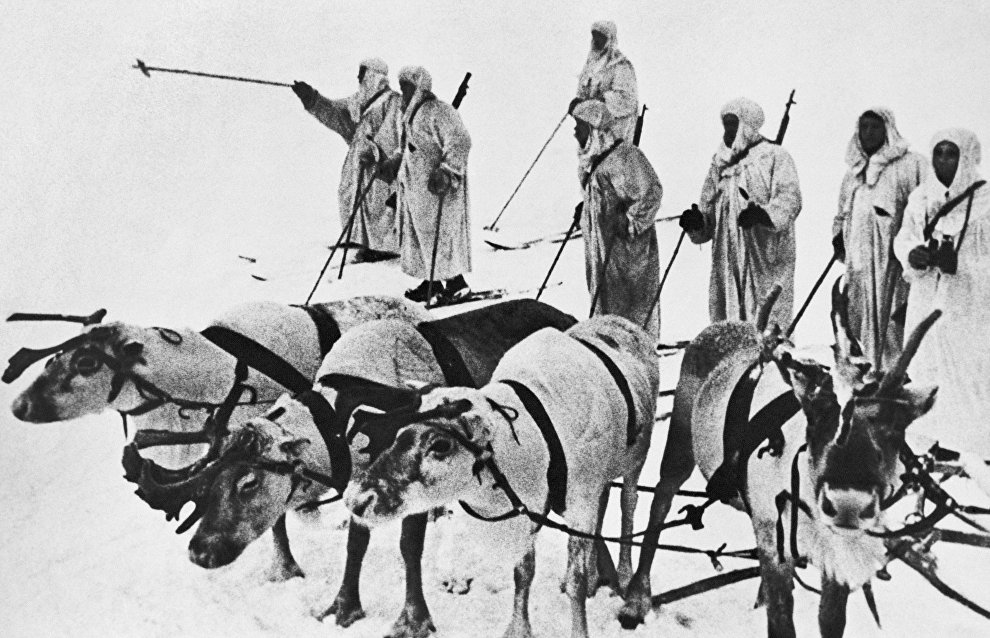 New facts on Yamal's contribution to the Great Victory

Researchers at the Arctic Studies Research Center have been collecting archival documents of the Great Patriotic War period to learn more about the people of Yamal and their efforts in combat on the frontlines and on the home-front.

The war years were the 20th century's most difficult for reindeer breeders. By 1941, the peninsula had the second largest caribou herd (after Chukotka) with 358,000 head, but by the end of the war that number had declined by over 130,000.

"Caribou meat was procured for the front and for workers in defense plants in Omsk," says Olga Ryabkova, a junior researcher at the Department of History and Archeology at the Arctic Studies Research Center.

"To preserve this local industry, in 1944-1945 caribou breeding farms were organized into 21 collective farms with a capacity of almost 68,000 head, and several corrals were built for veterinary treatment."

Fur trapping was equally important. Each year the locals hunted, raised and sold high quality fur skins worth millions of rubles to the state.

During the war years women held the fort while male reindeer breeders and hunters went off to war. Women also became the main labor force at fisheries. From 1941 to 1945 Yamal workers caught 81,000 metric tons of fish. Fishing proceeded on a year-round basis starting in 1942. Meanwhile, the People's Commissariat of Fisheries organized research and fishing expeditions in 1943-1944 headed by Doctor of Biology, Professor Alexander Probatov to ensure the efficient use of aquatic bio resources and to establish maximum fishing limits.

Arable farming in the Arctic, which was launched in the 1930s, continued. It is believed to have been pioneered by Yamal scientists Dmitry Chubynin and Boris Patrikeyev. According to historians, the local authorities made every effort to expand crop growing among the population, thus, this industry did not collapse during the war despite the lack of labor and funding. Total cropland area grew by 1.5 times while hothouse and garden frame capacity more than doubled.

Yamal researchers are very interested in data on the participation of the low-population ethnicities of the North in combat activities in the war and their contribution to Victory. Today, information is available on 96 representatives of the indigenous peoples of the North who were decorated with orders and medals. Many of them distinguished themselves as excellent snipers when serving in rifle divisions.

Sergei Shulinin, a junior researcher at the Arctic Studies Research Center, reported one example, "The courage and bravery of junior political instructor Ilya Okatetto, of Nenets, commands respect. He became an air gunner and was awarded the Order of the Great Patriotic War 1st and 2nd Rank, the Order of the Red Star and the medal For Courage. He completed 74 successful combat missions in an Ilyushin Il-2 ground attack plane."

The names of two other residents of the Yamal-Nenets Autonomous Area are connected with one of the most famous events in WWII. One of the Victory banners over the Reichstag was hoisted by the commander of a reconnaissance group, Hero of the Soviet Union Vasily Davydov. Sergeant Major Mikhail Ryabkov also took part in storming the Reichstag, his radio station was the first to report that the Victory Banner was flying over Berlin.

Another curious story is connected with Alexander Polyansky, senior radio operator on the Georgy Sedov icebreaker. He was awarded the title Hero of the Soviet Union in 1940 while during the war from 1941 to 1944 he headed a polar station on Bely Island and ensured the navigation of Arctic convoys. Polyansky was the only person in the Autonomous Area to have been decorated with medals For the Defense of the Soviet Arctic and For Victory over Germany in the Great Patriotic War 1941-1945 for his successful work at a civilian facility.

The Arctic Studies Research Center continues its research for the regional, patriotic project, The Kara Expeditions. The book, The Story of Convoy BD-5, has been released. It describes the tragedy of the greatest loss of life in Arctic convoys during the Great Patriotic War.

Overall, according to the researchers, 8,982 people were called up for military service from the Yamal-Nenets Autonomous Area in the Red Army. Of these, 3,783 servicemen were killed or were missing in action. Over 3,000 people were decorated with orders and medals, eight of them were conferred the title, Hero of the Soviet Union. Currently, two more servicemen from Yamal, who were also Heroes of the Soviet Union, are being researched.