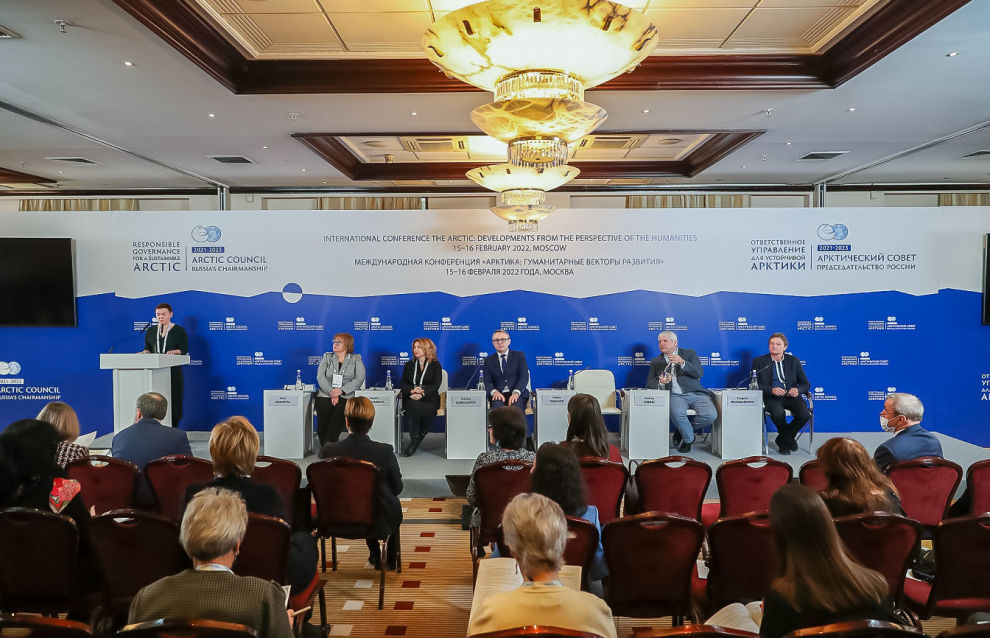 Experts discussed the history, linguistics, arts, ethnography and humanitarian aspects of the natural sciences in the context of addressing the acute problems of the Arctic peoples and preserving their cultural heritage at the international conference, The Arctic: Humanitarian Directions of Development. It took place February 15-16 as one of the main events under Russia’s chairmanship of the Arctic Council.

Nikolai Korchunov, Ambassador-at-Large of the Russian Foreign Ministry and Senior Arctic Official of the Russian Federation to the Arctic Council stressed that the Arctic was an important part of the national and international cultural space. He also noted that it was necessary to preserve the cultural and historical heritage of the indigenous peoples of the North.

“Russia’s chairmanship includes a special emphasis on the human dimension and improvement of the quality of life of the people living in the Arctic. This is why last June Russia initiated the project ‘Digitalization of the Language and Cultural Heritage of the Indigenous Peoples of the Arctic’ to maintain the cultural perspective of the region’s development. The project was supported by the Arctic Council working group on sustainable development. Culture is an essential part of the human dimension of Arctic cooperation, where museums can play an important role. In this context, we support the possibility of uniting the museum collections of the Arctic countries into one online exhibition,” Nikolai Korchunov said.

Rector of the Moscow State Linguistic University Irina Krayeva noted that today the global community is concerned about climate change and prevention of disasters in the conditions of the extreme North.

“Ethnic and cultural factors deserve special attention, which requires more Arctic research into humanitarian knowledge. This is reflected in the priorities of Russia’s chairmanship of the Arctic Council, which includes the development of human resources, support for the indigenous minorities, and the preservation of their cultural heritage, as well as international scientific cooperation and Arctic tourism,” the rector noted.

According to Russian Deputy Minister of Science and Higher Education Natalya Bocharova, the goal for the total number of admissions to universities in the Russian Arctic is 5,830 state-funded places for the 2022/2023 academic year, which is 10 percent higher than the number of places approved for the current academic year.

“The conference program includes sections on the arts and folklore of the ethnic groups of the North, with reports by specialized linguists on the preservation of the languages of the Northern peoples. I believe that this conference can become an international and interdisciplinary platform for the exchange of expertise and can be used to review cultural, folklore, historical, and linguistic research in the Arctic,” Natalya Bocharova said.

The importance of international cooperation in the Arctic was also noted by Director of the Fulbright Program in Russia Dr. Joel Ericson.

“The Arctic is a microcosm of nature and culture. We want this region to become economically sustainable. And we hope the indigenous peoples will feel protected,” Joel Ericson said.

The discussions included leading Russian and foreign scientists, officials from the Russian Ministry of Science and Higher Education, the Ministry for the Development of the Russian Far East and Arctic, the Foreign Ministry, and Arctic diplomatic missions, as well as representatives from the Association of the Indigenous Peoples of the North, Siberia, and the Far East, the Arctic Athabaskan Council, the Saami Council, the Aleut International Association, and the Inuit Circumpolar Council. Presentations were delivered by 180 speakers from the Arctic Council member states as well as Italy, Hungary and Estonia. The event brought together 40 universities, 20 scientific institutions and laboratories, eight public organizations, and independent researchers and artists.

A stream of the conference can be found at https://arctic-council-russia.ru/broadcast/the-arctic-developments-from-the-perspective-of-the-humanities/