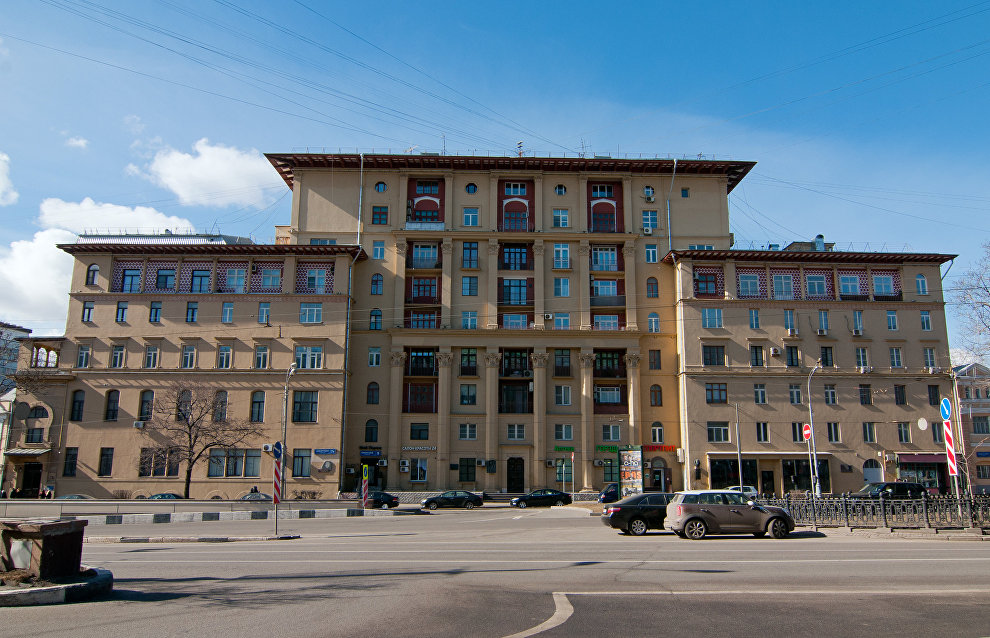 Polar explorers are tough and brave and used to living in conditions that ordinary people would not, frankly, consider comfortable. However, at moments when the North Star does not call them to travel, these courageous people live in flats provided with plumbing and central heating. During the era of polar discoveries, Arctic explorers were esteemed in the USSR like cosmonauts in the 1960s, so a block of flats was built for them on Nikitsky Boulevard.

The yellow-colored building in Stalin's Neo-Renaissance style with red balconies was designed by architect Yevgeny Yokheles upon the order of the Chief Directorate of the Northern Sea Route in 1936. The architect preserved Countess Sheremetyeva's small tenement building nearby, skillfully incorporating it into the left wing of his building. Interestingly, the House of Polar Explorers became Yokheles' first large-scale project. Afterwards, the architect worked together with maître Ivan Zholtovsky and later developed standard buildings, including small ones.

At different times, the building served as the residence of many outstanding polar explorers, such as Georgy Ushakov and Pyotr Shirshov, pilot Anatoly Lyapidevsky, sea captain Mikhail Belousov, head of the Aviation Department of the Chief Directorate of the Northern Sea Route Mark Shevelev and head of the Yugorsky Shar polar station Anany Ostaltsev. Altogether, seven people awarded the title of Hero of the Soviet Union lived there.

Pilot Lyapidevsky took part in the expedition to save the crew of the SS Chelyuskin. He landed his plane on an ice float and took the women and children aboard. He was awarded the title of Hero of the Soviet Union for the operation. The pilot was a hospitable man and often entertained his friends in his flat. Legendary sea captain Mikhail Belousov managed to ply two voyages along the Northern Sea Route in a single navigation period. In 1940, he directed the operation to release the Georgy Sedov ice-breaker from ice. Pavel Golovin, one of the residents of the building, was the first to fly over the North Pole in 1937.

Hero of the Soviet Union, Arctic explorer Pyotr Shirshov moved into the building in 1938. "He came here in 1938. The crew members drifted for almost a year. The entry in the house register read that he arrived here ‘from an ice float'," Ushakov's granddaughter Paola said in an interview with RIA Novosti.

Each flat had a maid's room, a kitchen with a gas stove and an ice cellar. Each floor was provided with laundry, drying and ironing rooms. Not at all modest for the 1930s. The building had duplex apartments that served as a hotel for polar expedition pilots.

With time, not only polar explorers but other outstanding people took up residence in the building, such as actors Vitaly Solomin, Alexei Petrenko, Natalia Varley, and writer Yulian Semyonov.

Over the last five years, some residents have fought against an additional storey rising over the left wing. For years, the flats in the building have been bought by people who have nothing to do with Arctic exploration, but who, anyway, want to take up residence in the legendary building. Unlike Countess Sheremetyeva's tenement house, the attic with an area of 170 square meters does not add beauty and elegance to the building.