Webinar ‘The microclimate of Arctic cities’

Arctic.ru has organized a regular webinar on the microclimates of cities above the Polar Circle. Pavel Konstantinov, a senior lecturer at the Geography Department of Lomonosov Moscow State University and head of the University meteorological observatory’s meteorology department, discussed the environmental and economic significance of studying warm polar regions.

Pavel Konstantinov conducted a presentation during the webinar and responded to participant questions.

Are such studies planned in other parts of Russia, such as the Khibiny or the Ural mountains?

Yes, of course, but because we are only at the beginning of a long journey, or at least that is what I hope, we start out with the largest and northernmost cities. Of course, we are planning this year already to conduct our research in major cities of Western Siberia, such as Khanty-Mansiysk, Nadym, and, possibly, Salekhard. I believe every Russian city should have such a system in order to streamline not only the heating costs, but also to account for different levels of comfort and better urban planning. Speaking about our ultimate goal, we certainly plan to cover every Russian urban area.

You said that urban microclimates are affected by the population size, level of urban development, etc. You showed a chart whereby urban population is on the rise. However, we all know that the outflow of urban population from the Arctic regions is fairly large and is going at a fast pace. For example, the Murmansk Region is notorious for the outflow of people. Do you think this trend will have a strong impact on the urban microclimate? What consequences could such an outflow have?

With regard to the trend, as far as I understand, there is almost no rural population in the Murmansk Region, which is true of the entire Russian North. That is, the urbanization is almost 100 percent with the exception, perhaps, of the Khanty-Mansiysk Area with its nomadic indigenous population, and Eastern Siberia. As far as I understand, urbanization in the European part is almost 100 percent. Urban populations migrate to other cities in Russia. As far as I know from the recent reports that I had a chance to hear, people from Murmansk mostly go to St. Petersburg, clearly, because it's the closest center of attraction for them.

The fact of the matter is that, as you be may be aware, the official concept for the development of the Arctic is different in principle. If things go the way we want them to, and we learn to properly use the Northern Sea Route in the conditions of climate change, and make it a truly national project, then it will call for building more towns and more ports, where caravans can carry out their logistics activities and also to simply support this transport artery. Based on this concept, we have arrived at the conclusion that we need more urban areas in the Arctic. Our findings will be very important for designing such urban areas. If we include the factor of microclimate at the design stage, the savings from the lack of financial losses due to improper design can be very large.

You said that wildlife is drawn to urban areas because of the microclimate. In Apatity this process is unfolding right before our eyes. Over the past three years, we had a constant flow of bears and wolves visiting that town, and every media outlet is talking about it. Hence, my question: if the urban microclimate affects our fauna that much, how does it affect the flora?

I am a geographer and a climate scientist, so unfortunately, I don't have answers to all the questions that you may have. Since we are limited in time, I didn't even take up the issue of flora, but, of course, it is also part of the equation. Urban flora is changing. I know that, for example, in urban areas, we can observe the presence of more heat-loving plants, which you normally see in climate zones located 400 to 700 km to the south. In Moscow, we can see plants that are more typical of the black earth area, and they feel quite comfortable there. Of course, I'm talking about plants growing in the open.

Who makes mobile weather stations? Is this a Russian invention?

Certainly not. We had to invest very serious efforts in choosing the right measuring devises. For continuous weather measurements at the station, we employ equipment of one of the oldest manufacturers that used to supply devices as part of a program to equip farms in the US with weather stations. These weather stations outperform their stated specifications in terms of reliability.

The micro sensors we use are quite unique. They were initially designed for an entirely different purpose and were used in the logistics industry. Roughly speaking, you toss a micro sensor in a train car transporting flour, so that those who ordered the shipment can track whether transportation and storage requirements were met, and what happened to the cargo on the way to its final destination. As it turned out, these sensors can be quite efficient in open air and the cold northern temperatures, which prompted us to use them. This is also an imported device.

Can you see thermal pollution from space?

Of course, but there's a catch. A thermal satellite can only read temperatures from the underlying surface — not the air layer we live in, but the asphalt or rooftops, if we are talking about a city. It is virtually impossible to shift the focus from rooftop temperatures to measuring the microclimate. This is why we have to measure these indicators manually.

Naturally, it makes it melt. This is why buildings are collapsing in Norilsk. This is actually happening. Of course, this is a major issue and permafrost experts are working on it alongside polar architects who design and erect buildings in regions with unstable perpetually-frozen ground. Experts are struggling to find a solution to this technical issue.

Do you share data with researchers from other countries? Is there an international database on urban microclimates?

This idea is about to be realized. Of course, there are initiatives. But it requires subtlety, since a common measurement system requires using uniform devices. If we are talking about the measurement network in Berlin, it is denser and the devices they use are totally different from those we use. Consequently, before comparing any data they have to undergo thorough statistical treatment. Therefore our data are slightly different, but we welcome any interest. In September, I will address a session on polar cities at a conference in Ecuador. We are always happy to share our measurements with anyone interested in analyzing and using them. 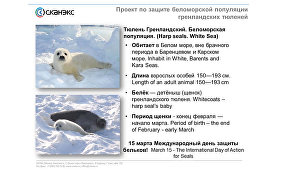 Natalya Yevtushenko is an expert of the operative satellite monitoring department at the ScanEx research and development center and a junior research associate at the Shirshov Institute of Oceanology at the Russian Academy of Sciences.
Print