Arctic.ru has held a webinar on the changing state of the cryolithozone in the Yamal-Nenets Autonomous Area. This process is caused by global warming. Anton Sinitsky, PhD. (Geology & Mineralogy) and Director of the Arctic Research Center, discussed the risks of melting permafrost layers and explained the need to monitor the Arctic ice situation at a time when the Arctic coastal zone continues to erode rapidly.

Anton Sinitsky answered questions following the presentation at the webinar.

What equipment did you use to study the influence of climate on permafrost?

We also use standard loggers and sensors to take temperature measurements in permafrost and wells, one of which I showedin the presentation. Temperature is taken once a day at a certain depth. We use both Russian and foreign equipment, which has proved its worth. Actually, we don't need any unusual or expensive equipment; the important thing is the consistency of the measurements.

A mysterious crater in the Verkhoyansky District in Yakutia was first described some 25 years ago, but researchers cannot explain its appearance to this day. Do you have any ideas?

Unfortunately, I know nothing about this crater, but I've heard that it is not the only such crater in Yakutia. The other craters are not very big. I would not attribute the appearance of this crater only to global warming. We need to know the conditions under which a crater is formed. In our case, it is a drained lake or khasyrey, an area at the junction of two tectonic microblocks. It could be influenced by atmospheric water. On the other hand, this crater is located over an open structure, or rather no well was drilled there but geophysical studies have shown that there is a certain structure there, it has a name, and the amount of hydrocarbon resources in that structure has been estimated, and so it could be that thermal flow over this structure in sedimentary rock moved up degassing channels.

The conditions in Yakutia are different from the area we surveyed — when I showed the slide of our rocks, you could see that it was sedimentary rock and clay loam, while it is hard rock in Yakutia, metamorphic and pyrogenic rock, a geologically complex system. There are many factors that should be taken into account here, not just climate change. At the same time, we know that winters are very cold and summers are very hot in Yakutia. Very short hot seasons are not usual and are even dangerous for our region. The tundra was very dry this year — we walked in tennis shoes in Gydan, whereas we usually wear rubber boots and walk ankle deep in the mud. This year the soil water drained with the melting snow. We cannot predict what will happen when it freezes and whether the soil will bulge or not. There are many factors, and I wouldn't draw a direct comparison to Yakutia.

You said there is feedback — when ice melts, water covers parts of dry land, which leads to landslides. But this situation is compensated by the interaction between the atmosphere and cryolithosphere, which means that there may be more snow in some regions, and the snow cap will compensate for the warming by cooling soil. Can one compensate the other?

Each case is unique. In some regions, the artificial accumulation of snow accelerates dangerous processes. It is believed that dense snow keeps cold like a thermos flask, but we need to take into account the largest available number of factors in each particular case. 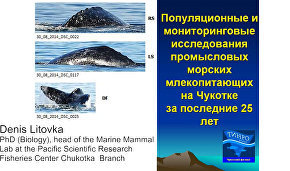 Webinar: Commercial Marine Mammal Studies in Chukotka over the Past 25 Years