Arctic.ru held a webinar on Novaya Zemlya’s geology. Dmitry Kryukov, a hydrogeologist, environmental protection expert, and employee of the Russian Arctic National Park, spoke about the history of geological exploration of the Novaya Zemlya Archipelago, the lives of the geologists who studied it, and the geological features of archipelago’s northern tip.

During the course of the Webinar Dmitry Kryukov made a presentation and took questions from the audience.

How much of an impact has human activity had on the geological processes on Novaya Zemlya?

Not all that much. Not much impact on geological processes because no geological activity was taking place there. The only exception is the Novaya Zemlya test range where nuclear devices were tested, but I have nothing to say about it. All I know is that these tests were conducted and surely they made an impact, but these consequences are not felt on our territory. The processes taking place there are geological, and they are a very slow phenomenon. What do human footprints look like there? This is Arctic debris, which is so much talked about and which is being cleaned up. There are no grounds for saying that human activity has left a geological footprint.

What is the effect of the tidal processes?

They have a destructive effect. The sea, first, smoothes the fragmented material, turning sharp-edged debris into pebbles. Second, rock is destroyed in the tidal zone where there are cliffs. There is also the impact of glaciers, the slide of glaciers also makes an impact. Because this is an overview presentation, I did not think it would be helpful to go into these details, I thought it was more important to pay tribute to the colleagues who worked on this territory before us, especially since their life stories are in many ways remarkable.

To go back to the sea. The sea reworks the fragments of material, takes the sediment deposits, forms sedimentary rock and destroys the cliffs that it can reach.

How often do you go on geological expeditions to Novaya Zemlya? Every year?

Yes, expeditions at our national park take place every year. It is comprehensive work, there are different specialists among the expedition members. A geologist has been included every year recently. There are just two warm months when one can work.

Are there any unusual or mysterious features on Novaya Zemlya, such as conical depressions, faults and so on?

Geological faults occur, usually accompanied by a series of cracks. They are well known, but the good thing about them is that they are very clearly visible: everything is on the surface, everything can be observed, you can see what has slid or dropped and from where.

You mentioned that you've made a mobile exhibition in Arkhangelsk. Are you planning to take it to any other cities?

Yes, we intend to offer it to the World Ocean Museum in Kaliningrad, though they don't yet know about it. It will be on display at the Arkhangelsk Regional Studies Museum until December 4 before moving to Northern Arctic Federal University in Arkhangelsk. Our colleagues from the university liked the posters, materials and samples. They are ready to use them for teaching purposes. If anyone of those present can offer an exhibition site we would be glad to discuss it and to cooperate.

Thank you for your interest in this topic. 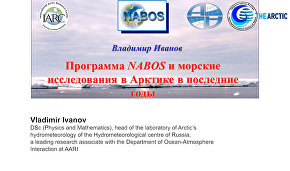