Webinar on alien species and biological invasions in the Arctic seas

The invasion of alien species in the Arctic seas is discussed during the webinar. Dr. Vasily Spiridonov, a senior research associate at the Shirshov Institute of Oceanology RAS, tells about the change in marine biodiversity with focus on crab species.

Vasily Spiridonov gave a presentation during the webinar and replied to questions from the audience.

People have been noting lately that more southerly species have started moving into the higher latitudes due to the warmer climate. Can this be called an invasion?

This is a contentious issue. Understandably, biological species propagate differently when the climate changes. This trend is now more pronounced in the North Sea, with more southerly species migrating north. Yes, in a certain sense, invasion includes a rapid buildup in biological populations on the border with any specific habitat or in new areas. I would prefer not to call this an invasion because these processes have always taken place and because they are reversible. And when an alien species, introduced with the help of people, has gained a foothold somewhere and has started increasing its population, then this, as a rule, is an irreversible situation. Serious changes are required for a naturalized species to vanish into thin air. I don't know what factors could destroy the red king crab population in the Barents Sea. All we can do in this situation is allow everyone to catch it. Even then, I believe the king crab will remain there. Possibly, it would be correct to add the word "alien," so that people can know what we're talking about.

I have a question about red king crab sightings in the White Sea. Can its expansion be linked to climate change, including Arctic warming? On the other hand, migrating Chinese crabs are known to travel up to 800 kilometers, including to areas where they are unable to reproduce because of low salinity levels. Are we now facing a similar situation with the king crab? Or is this a sterile habitat where the king crab is unable to settle? What are critical salinity levels for optimal reproduction?

It appears that 30 pro-mille salinity levels are critical for its reproduction. It's hard to say anything more definite… No young king crabs have been seen in Kola Bay where salinity drops below 30 pro-mille. It may be strange, but there is not enough data because researchers were probably not very interested in the issue while studying the natural habitat. You see, local salinity levels are high enough, so this doesn't play a critical role.

Experts from the All-Russian Federal Research Institute of Fisheries and Oceanography (VNIRO) worked with artificially grown crabs, and bred crab larvae. Theoretically, they could have staged these experiments, although their task was slightly different.

Of course, White Sea salinity levels are… And the main roe-bearing areas, including the Onega Bay where benthos biomass meets king crab requirements, are not very good for crabs in terms of their salinity. Quite possibly, borderline salinity levels can be found in the Kandalaksha Gulf. But adult specimens have nowhere to migrate, and there are few places with high benthos biomass levels. So it seems that certain natural restrictions exist.

I have recently been to Murmansk, and I met with my colleagues at the Knipovich Polar Research Institute of Marine Fisheries and Oceanography. They are currently writing an article on the crabs' gradual expansion along the northern border of the White Sea. Adult males are frequently sighted in the northern section of this narrow "bottleneck" strait linking the "vortex" with the sea's central area.

This is very much like the Chinese crab. The adult males mostly migrate, although we have seen roe-bearing females in the sterile introduction zone, but we did not experiment to find out whether they could reproduce in such low-salinity waters.

* According to experimental VNIRO data, 22-25 pro-mille salinity levels are the lowest level for the successful development of young red king crabs.

Do you cooperate with your foreign colleagues during your research?

Vasily Spiridonov: Yes, of course. We cooperate very actively on the king crab. We cooperate with Norwegian researchers mainly, because they directly deal with this issue, although it should be noted that Norway has politicized the king crab issue to a great extent. There are pro-crab and anti-crab parties in Norway. Some people believe that the red king crab is something very bad, and others think the species is a good thing there. Even more active passions are raging around this crab because researchers receive contradictory official directives. Norway is now slightly less interested in this issue than it was five, six or ten years ago when really active political debates took place. At that time, the Norwegian government spent more on research, and now everyone there has become accustomed to the king crab.

Would you advise officials in Murmansk to allow offshore king crab fishing?

I think so. Crab catches in the coastal area are currently banned because authorities fear that they would otherwise escalate into predatory catches and poaching. But poaching continues all the same. We can only guess where crabs are being caught and roughly estimate the scale of these catches. In principle, any legalization improves the information situation. In my opinion, any ban highlights an inability to draft effective control and management procedures.

The ban was mostly motivated by the fact that crabs reproduce in coastal areas. This is so, but it's possible that another reproduction area is currently being established in the eastern part of the crabs' habitat, and that area is not linked with the coastal zone. The Polar Research Institute of Marine Fisheries and Oceanography is the main agency addressing this interesting research issue. I hope it will be clarified soon. If it is, the system for managing and monitoring crab catches will be in for major changes. 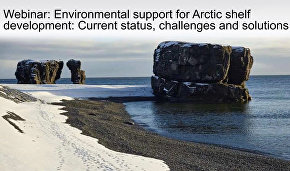 Arctic.ru has held a webinar on providing environmental support for the economic development of the Arctic shelf.
Print