Arctic.ru has conducted a webinar devoted to the study of the seabed fauna of the deep-water Arctic. What amazing animals live on the bottom of the Arctic Ocean? How are they being studied? Why is it important for us to know about the state of the marine Arctic ecosystems? Andrei Vedenin , a junior research assistant of the Shirshov Institute of Oceanology of the Russian Academy of Sciences, answered these questions and more.

Andrei Vedenin replied to questions during the webinar:

You have noted that foreign icebreakers operate in these areas, for the most part. Are Russian ships involved in this research, and how many Russian scientists usually take part in these expeditions?

Of course, Russian ships are also involved, but we don't have any specialized research icebreakers that can be used on a regular basis. We either chart the icebreakers that can help the expedition to some extent, or we sail ordinary vessels to some remote locations. In late August and early September, huge Arctic areas become ice-free; this did not happen 50 years ago. And we can study ocean areas up to three-four kilometers deep from aboard ordinary vessels. An expedition to study deep-sea areas in the East Siberian Sea has been scheduled by the institute this year.. Honestly, we reached a depth of 2.5 kilometers in the Laptev Sea in 2015. However, scientists from other countries are also working in the Arctic Ocean.. Also, there are a lot of Russian scientists who sail aboard "Polarstern" and "Healy". These Russian scientists are invited to take part in the expeditions as experts. I have already sailed on board "Polarstern" twice.

How are people assigned to these expeditions, and how many Russian scientists sail onboard?

This depends on the expedition's goal and the area being studied. To join an expedition, one should have certain connections, and he or she should know the expedition chief. Applicants should have a degree and well-known publications. If you work for Shirshov Institute of Oceanology RAS, or Murmansk Marine Biological Institute, or any other specialized agency focusing on the Arctic and its high-seas section, then you will have no trouble joining any expedition. Nevertheless, prospective volunteers will face numerous difficulties, and it is almost impossible for them to take part in such expeditions.

You have noted that many seabed fauna samples have already been retrieved and that all this data was obtained during the summer period. Is it possible to gain an insight into winter-time processes?

Yes, of course. We need to set up stationary camps for this purpose. For example, Soviet and Russian drifting polar stations, as well as the fewer U.S. and Norwegian stations that were operated there in the 1970s and the 1980s, also conducted research in winter. Unfortunately, most research projects dealt with plankton and cryo-biota only.

The farther you reach into the northern latitudes, the more problems you have with lowering a trawl or a multi-corer. Do you have to change your route's trajectory during such expeditions in order to reach some areas where you can use research tools?

Yes, unfortunately, this does happen. Two colleagues from our laboratory tried to use a trawl near the North Pole in late September, rather than in the winter. All of a sudden, their vessel was hit by a violent blizzard, temperatures dropped to minus 20 degrees Celsius, and ice-floes started squeezing alongside the vessel. The operation was immediately cancelled.

You have noted that trawls failed to collect all animals while collecting fauna and ground samples. How deep do trawls dig inside the seabed?

This is a very good question. It depends on the seabed itself because the trawl may disappear completely inside soft silt. In some areas, it glides along dense clay surfaces. Much depends on the way you lower the trawl because you can cast out enough cable to exceed preset depths 1.5-2-fold. You can trawl at a speed of half a knot, one or two knots. You can use 1,000 kg, 500 kg or 50 kg trawls. This amounts to sorcery, of sorts, and this explains the fact that, after numerous attempts, no one uses trawls as quantitative fishing tools anymore. Experts tried unsuccessfully to equip them with cameras and GPS systems for calculating coordinates, but their efforts were unsuccessful.

As I have already mentioned, we still don't have a clear picture of how a trawl really operates on the seabed, especially when it is dangling from a four-kilometer long cable and fluctuating with the current. You can understand how the trawl behaves at a depth of up to 50 meters. If you touch the wire, you can feel the trawl jerk after it hits a stone or digs into the seabed. The greater the depth, the harder it is to understand what exactly is happening on the seabed. I look through trawl statistics time and again; and, although trawls seemingly operate in identical conditions, one trawl remains empty with just 2.5 worms, and the other trawl is full of them, although total seabed biomass volumes should be the same. For some reason, one trawl collected plenty of biomass, and the other one come almost empty. Therefore I don't know how we can catch all these animals that cannot be retrieved by trawls. It appears that we should use robots to catch them, and this will become possible only in the future.

While some may still believe that there is no life in the Arctic Ocean, during today's webinar we saw amazing biodiversity there, so we have every right to say that the ocean is indeed filled with all kinds of different forms of life. Most of them are inconspicuous, small and colorless. Could you highlight what they have in common?

Deep-sea benthic fauna does have some specific features, but it is hard to tell the difference between the benthic fauna found in the Indian Ocean and that in the Pacific. What are the general characteristics of deep-sea benthic fauna? It is clear that its environment is different compared to the upper parts of the water column: there is no light, very little organic input, since most of it gets eaten before reaching the bottom, and the deep-water pressure is tremendous, affecting living organisms on a biochemical level. For example, on average the ocean is between three and four kilometers deep with pressure at 300 to 400 atmospheres. With this kind of pressure, fundamental characteristics like carbon or oxygen solubility in water change, which affects a plethora of things. For example, the echinoderms, the sea urchins, have a carapace, while beroid ctenophores holothurians do not have a carapace and developed instead special carbon structures in their body. All carbon structures become smaller and thinner in the deep-sea species, since carbon solubility is higher, making it harder to produce.

As for the fish, many have an air bladder filled with gas that they generate from their bloodstream for buoyancy regulation. From a depth of 800 meters you won't find any fish with an air bladder, since pressure compresses the air. Trying to pump air into a bubble makes absolutely no sense this deep. There are many other ways life forms adapt to this environment. For example, benthic animal tissue has a much higher water content compared to shallow-water fauna, making them much more jellylike and fragile.

You can see a Dumbo Octopus on the last slide. These octopi spend most of their time deep underwater waving their six arms and two legs, growing from their mantels. From this perspective they are more like jellyfish due to the high water content in their tissue.

For example, in the global ocean water temperature is above zero at this depth, while it is below zero in the Arctic at about minus 1.5-2 degrees. This can also have serious implications.

Who are the main consumers of the Arctic's deepwater benthic fauna?

You mean, who is at the end of the food chain? Naturally, someone consumes it and of course there are predators. That said, you won't find top predators similar to whales or white sharks in the deep-sea benthos. The ecosystem doesn't necessarily need them in order to properly function. In deep-sea benthos, predators seek to save as much energy as possible, so everything moves very slowly. If you could dive this deep, you would be able to catch fish with your bare hands.

Does your research on benthic fauna have any practical bearing?

Of course, any sea fauna research has a practical bearing since it deals with the ocean resources in general. For example, as the Arctic warms we can start thinking about the possibility to develop fisheries in the north of the Arctic. In fact, the Bering and the Barents seas show phenomenal results in terms of codfish and other kinds of fish, while in the Kara Sea, Laptev Sea, East Siberian Sea and Chukchi Sea the results are negligible. One of the questions that may be asked in this situation is could these seas have better yields if the climate becomes warmer? Should we make plans in this respect and what can be expected?

Unfortunately, we can already answer these questions, and the answers are quite disappointing. Even if all of the Arctic ice melts, the ecosystem in the Siberian Seas will hardly change in terms of fishing. This is attributable to fresh water flowing in from Siberian rivers that stratify ocean waters. Normal primary production and the availability of animal plankton and fish require waters to be properly mixed. If there is a thin fresh water layer on the top, nothing will come out of it. The Black Sea provides one such example with a layer of freshwater on top and salt water below. The problem is that when the salt levels vary by several PSU, this can only be offset by double-digit splits in the temperature. If you chill the layer of upper fresh water, the water will mix. However, the temperature split is not important enough to launch this process. The same goes for the Arctic. 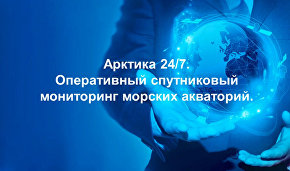 Arctic.ru has organized a webinar on the satellite monitoring of the Arctic territories. Natalia Filimonova, head of the monitoring of the seas section at the ScanEx Research and Development Center, discusses the potential and designation of satellite imagery, environmental monitoring and other uses for the data.
Print