Home
The history of Soviet Arctic pavilion at VDNKh
Arctic.ru discusses the Soviet Arctic pavilion at VDNKh National Exhibition Center that could have been the center-piece of the current exhibition but which was demolished about 70 years ago. Information and photos courtesy of the VDNKh press service.
©Photo by Public Relations Department of VDNH

The Northern Farming pavilion was built in 1937, two years before the All-Union Agricultural Exhibition opened. This was the former name that existed from 1939 through 1959. Later the exhibition was renamed the All-Union Exhibition of Economic Achievements (VDNKh). The pavilion was located in place of the exhibition's Timiryazevsky Public Garden and accommodated a display devoted to northern farming. The building was reconstructed in 1939, and the pavilion was renamed the Soviet Arctic. 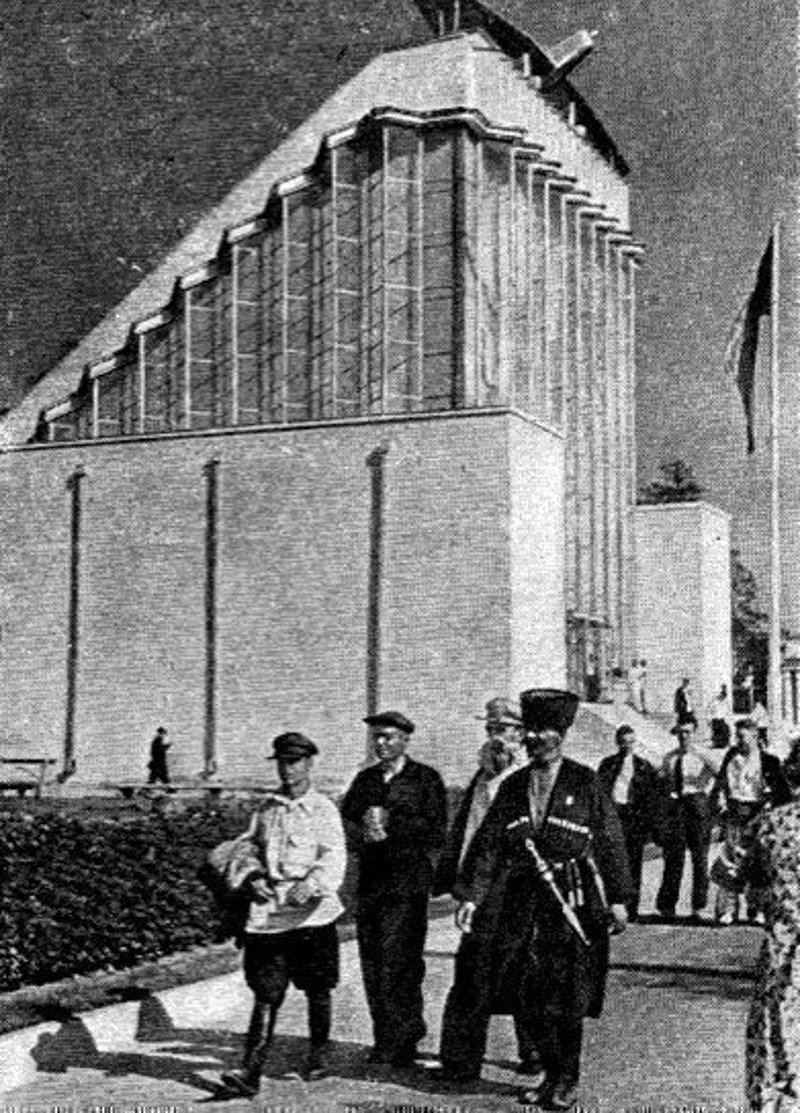 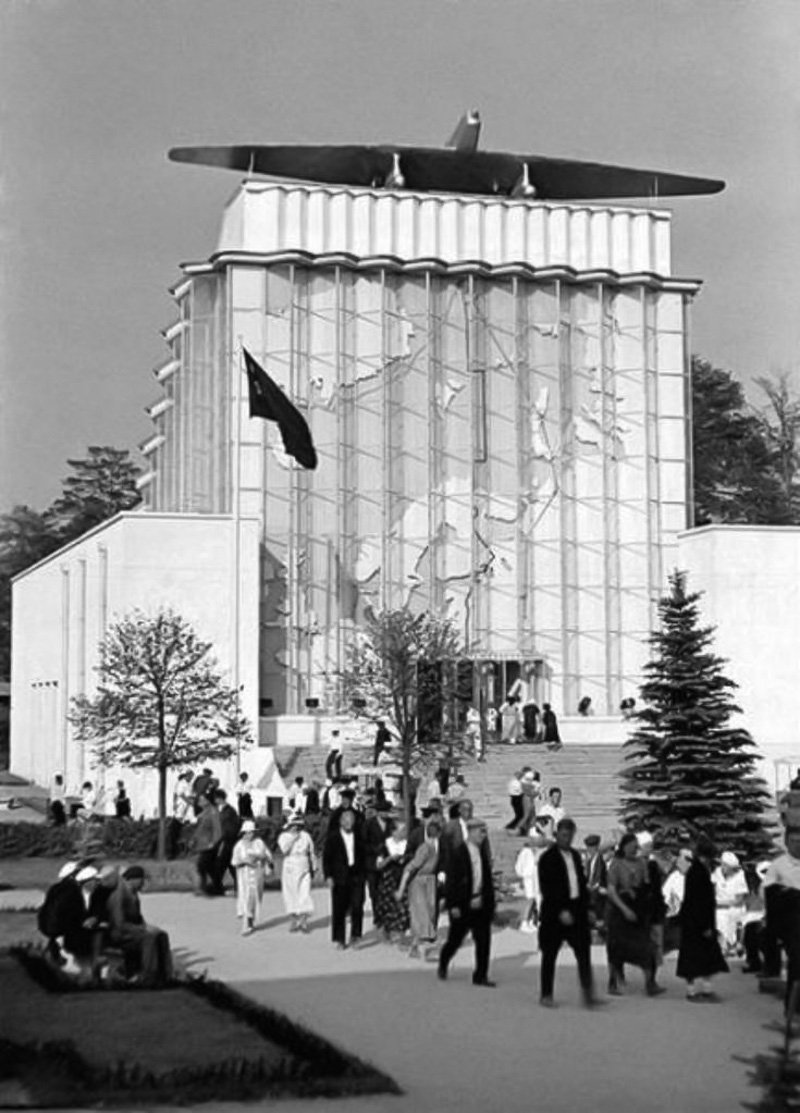 After reconstruction, the pavilion received a new impressive façade featuring a model of a world-renowned Tupolev ANT-25 polar plane, flown from the Soviet Union to the United States by the crew of Valery Chkalov in 1937.

The building's monumental proportions were accentuated by ribbed window panes designed to resemble a pile of ice-floes. A map of the Arctic showing the North Pole 1 drifting station that accommodated the expedition headed by legendary polar explorer Ivan Papanin covered most of the building's façade.

From the main entrance, visitors would find themselves as if on the deck of an icebreaker whose bow section provided an excellent view of the pavilion's vast hall. The center section included a sculpture showing a group of polar explorers amid ice formations. A 65 square meter mosaic relief map called Developing the North with small lights consisted of tiny color china tiles; it illuminated the Northern Sea Route through the Arctic.

Models of the icebreaker Joseph Stalin, the flagship of the Soviet icebreaker fleet, the icebreaker Yermak and models of polar aircraft, meteorological stations, a radio beacon and the flag used by the North Pole expedition headed by Ivan Papanin were lined up below the map.

The hall featured the pictures, Stalin and Voroshilov Meet with Heroic ‘Stalin Route' Pilots and Stalin Meets with Members of the Papanin Expedition.

The spectators then "descended" from the icebreaker's ladder into the hall. The ship's transparent cargo hold contained various exhibits from the extreme north, including gold, silver, apatite, copper, nickel, tin, zinc and mountain crystal. The cargo hold also showed handicrafts made by northern ethnic groups, including clothing, footwear, ornaments and jewelry. A moving diagram in the hall's right section showed the Soviet Arctic's past and present. One stand was devoted to the Leningrad Institute of Northern Nations where representatives of 20 indigenous ethnic groups studied.

Some of the stands dealt with hunting, reindeer-breeding and farming in the north. A field overgrown with tundra heather, lichens and mosses, northern poppies and even polar birch-trees was located near the pavilion. 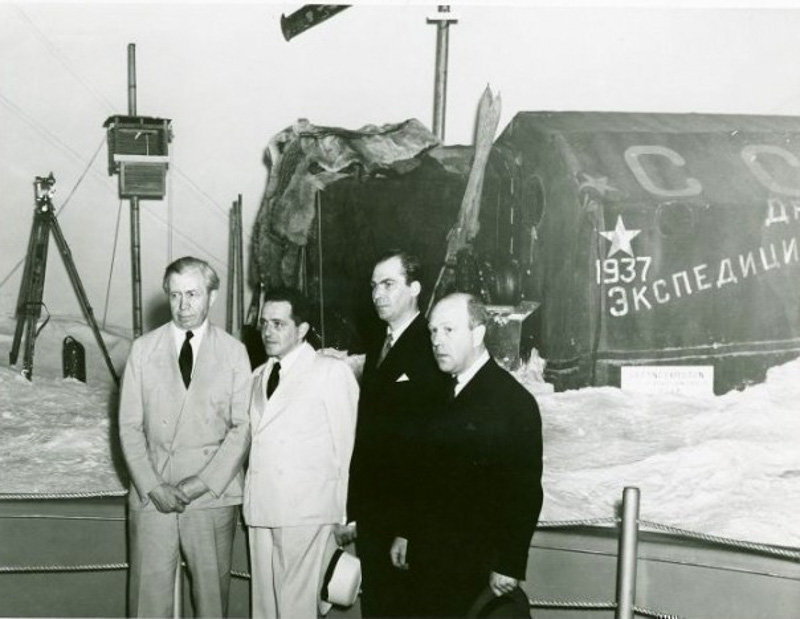 The Soviet Arctic pavilion at VDNKh. Exhibition of the North Pole expedition headed by Ivan Papanin ©Photo by Public Relations Department of VDNH

The tent used by the Papanin expedition was pitched amidst a garden of white flowers that resembled a snowdrift. The tent held accurately reproduced furniture and equipment as used in the legendary expedition. 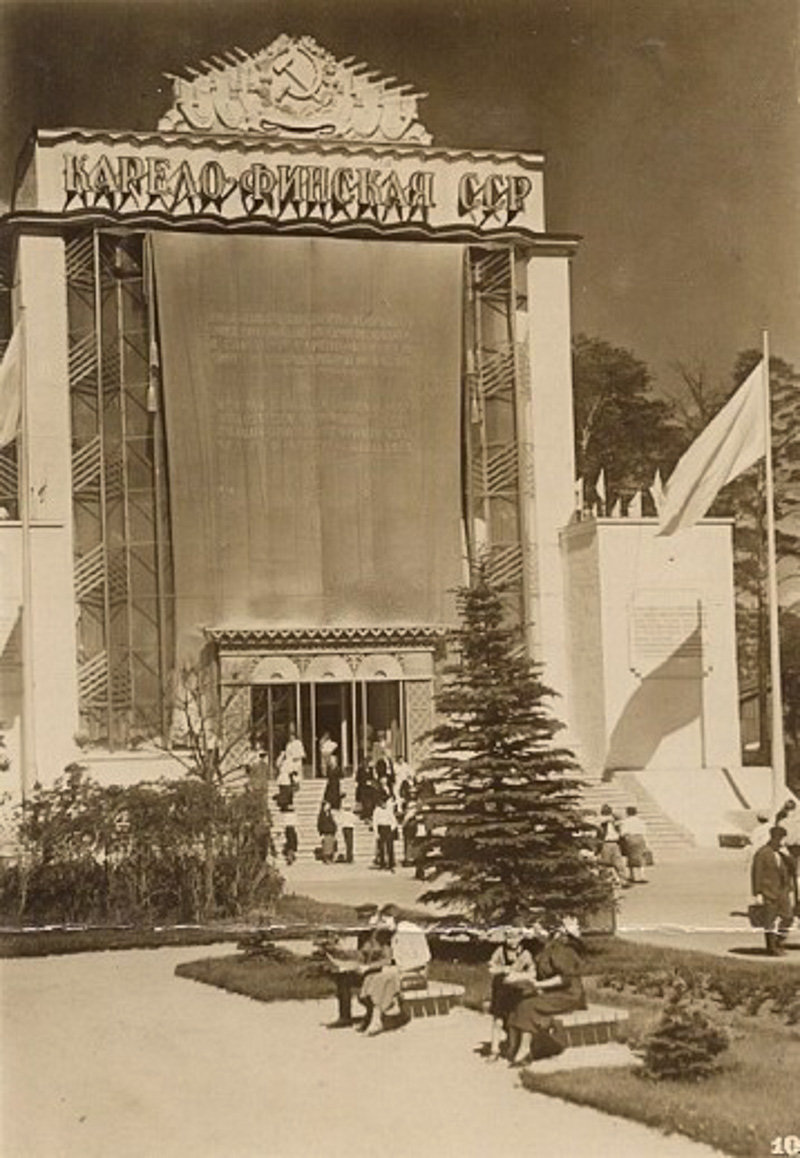 The pavilion featured mainly agricultural products as well as picture-panels called Ski Sport in Karelia and Defending Soviet Borders. It was also equipped with Eksursovod audio-guide. It was later decided to build a separate pavilion for the Karelo-Finnish Soviet Socialist Republic, and the former Soviet Arctic pavilion building was demolished.

Soviet Arctic in the United States

A section of the Soviet Arctic pavilion "visited" the World's Fair that opened on April 30, 1939 in New York City. The fair's motto was "The World of Tomorrow," and 200,000 people visited it on the first day. The Soviet Arctic pavilion contained unique equipment used during the 1937–1938 North Pole 1 expedition headed by Ivan Papanin, the route covered by the first Soviet polar drifting station, a large-scale model of the icebreaker Joseph Stalin and various stands narrating the difficult history of developing the Arctic. The pavilion's ceiling featured a glowing map showing the routes of the trans-Arctic flights taken by the crews of Mikhail Gromov and Valery Chkalov in 1937, as well as the route of the April 1939 unrefueled flight from Moscow to North America, flown by the crew of Vladimir Kokkinaki. It also housed Papanin's authentic tent that was part of the North Pole 1 station. An ANT-25 long-range aircraft, flown by Chkalov's crew from the Soviet Union to the United States, stood proudly in front of the pavilion. 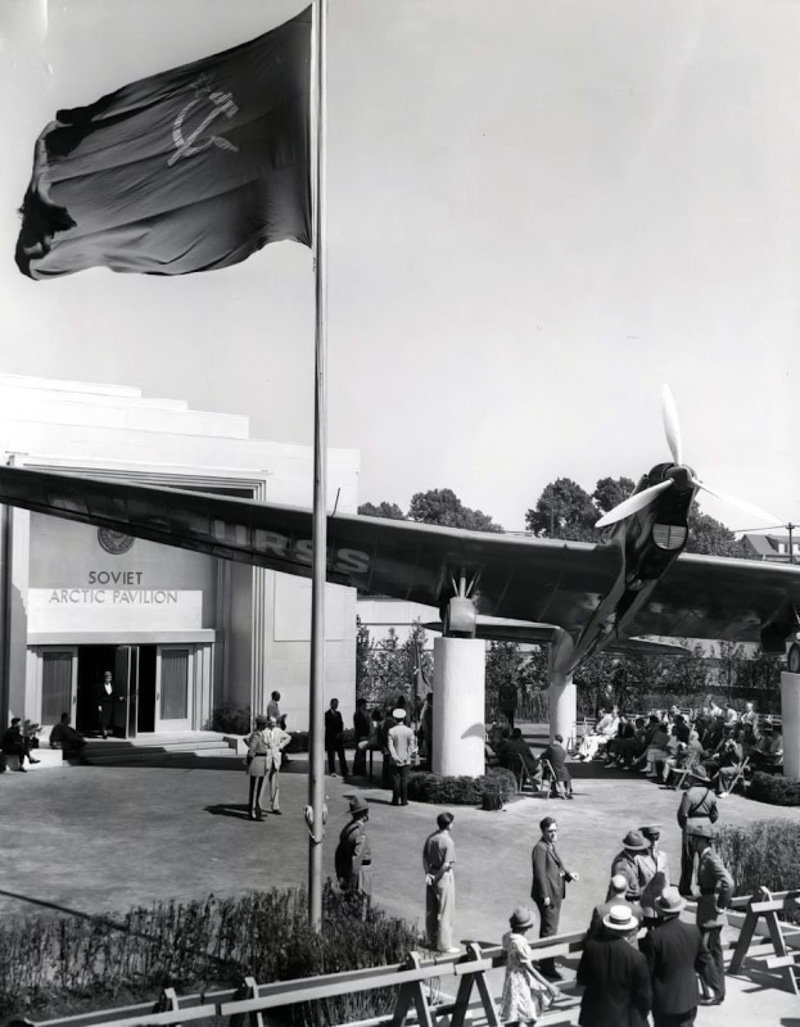 The pavilion, the exhibition's largest, cost $4 million to build, while the US pavilion cost only $3 million.

The Soviet pavilion was dominated by a huge 24-meter steel sculpture called the New Soviet Man by Vyacheslav Andreyev. Like the Statue of Liberty, the 30-ton sculpture was built on a metal frame and placed on a 60-meter high pylon-obelisk. The Soviet star towered high above US national flags, and US authorities had to install their flag on top of an 80-meter parachute tower, thereby reasserting their status as the exhibition's hosts. 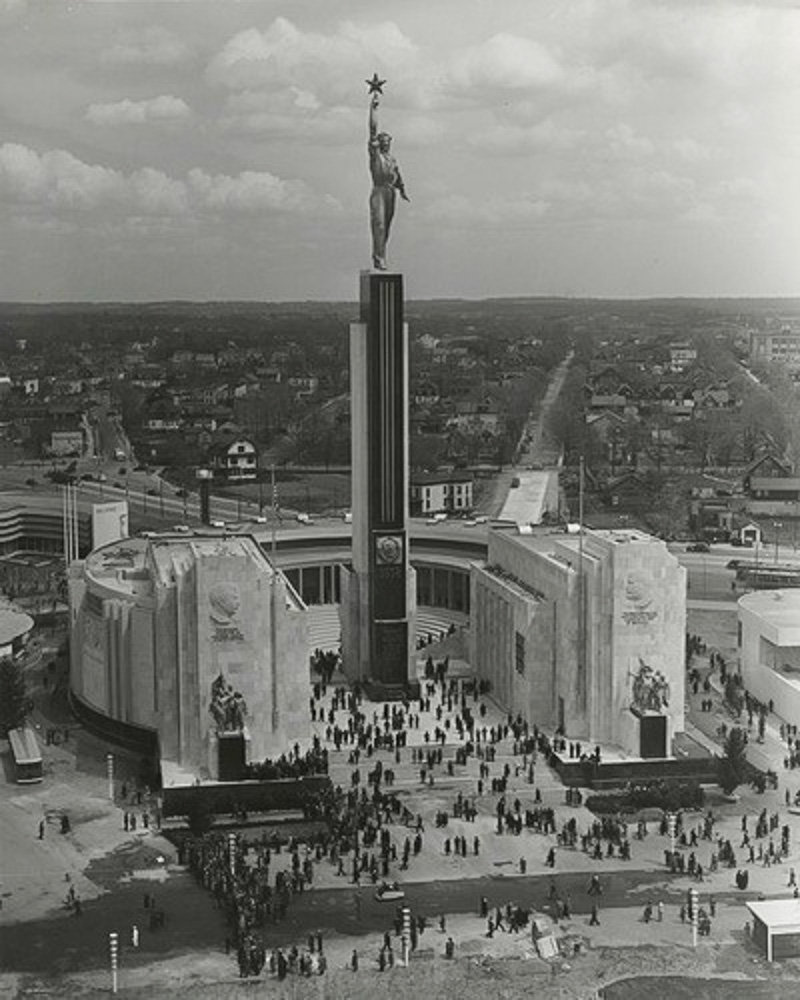 According to the press, the Soviet pavilion attracted about 20,000 visitors daily. In all, about 16.5 million Americans and visitors from other countries saw the Soviet exhibition in 12 months.