In late 1953, simultaneous preparations to set up drifting stations on ice-floes in the Central Polar Basin began in Moscow and Leningrad. Several weeks later, aircraft started delivering cargo to the Arctic.

We had planned to establish the North Pole 4 drifting station north of Wrangel Island, but it turned out that the area had mostly new ice formations. After discussing the situation, we decided to fly another reconnaissance mission there. We eventually found an ice floe that could receive planes.

We inspected the area around the ice floe and found there was no other suitable ice formation north of it. We pitched the first tent for the North Pole 4 drifting station and got to work. Our station was located 200–400 kilometers south of the planned landing area

While flying another reconnaissance mission some time later, I found an old ice floe covered with bumps southeast of our own ice-field. The nearly round ice floe had a diameter of almost 2,700 meters. As the ice floe was surrounded by hummocks, it had apparently withstood substantial pressure from nearby ice formations. A patch of ice-free water loomed to the south. The ice floe's thickness ranged from 2.4 meters to 16–18 meters on some bumps. We decided to set up our station to this ice floe.

Here's how we arranged the tents: The mess-room and the observation tower were installed in the center. Sleeping tents were located 20–25 meters away. Utility rooms, food storerooms, and tents for fuel and other consignments formed a larger circle. Several separate food, gas tank and gasoline stores were established to prevent a complete loss in case of unexpected ice shifts.

We started working right away, and we also pitched sleeping tents and prefab huts. Less than a month after the station was established, we had the mess-room, galley, steam bath, workshops, warehouses and reserve tents. We prepared emergency food stock, tools, instruments and other gear for possible relocation.

There was a lot of work, and we only slept three to four hours each day. But our success was guaranteed by a sense of responsibility for the project and by our solid friendship and mutual assistance

Spring is the calmest season in the Arctic. Nature didn't bother us for about 45 days, and the first crack didn't form in the ice floe until May 22. Located under the skis of the An-2 plane, the crack started expanding rapidly. But the pilots kept cool and took off 60 seconds before the ice floe broke. Two other cracks formed in early June. The ice floe shrank by about ten times down to about 650 meters wide.

In the summer, we reached an Arctic Ocean section dominated by patches of clear water, rather than the ice floes this time of the year. Sometimes our ice floe was completely surrounded by water. During storms, the spray reached our camp, and water was gradually chipping away at the ice floe's edges. 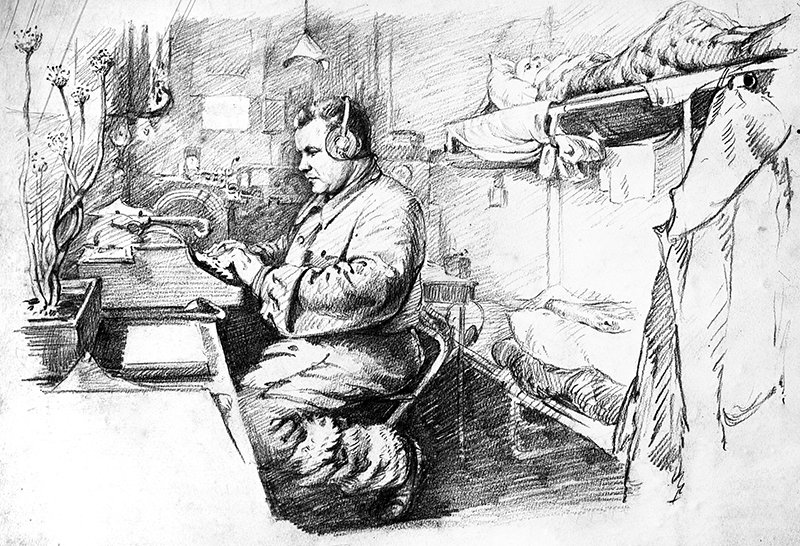 In the autumn and winter, the ice floes used for our planes cracked often due to large ice shifts.

We always worked calmly and according to schedule because everyone knew that a duty officer keeping watch 24 hours a day could notify us in an emergency. Life on the ice required constant vigilance, caution and bravery.

Our ice floe traveled 2,600 kilometers over a year, sometimes drifting along erratic trajectories and in circles, so we would find ourselves in the same place, after circling around

We didn't like drifting in circles, but we couldn't do anything about it because it was impossible to steer our "ship." Overall, the ice floe moved 503 kilometers due north, covering at least seven kilometers daily and on some days over 20 kilometers.

Our ice floe also rotated, while drifting along. It rotated by over 310 degrees clockwise in 365 days. These ice floe rotations caused a lot of trouble to researches. While conducting his observations, meteorologist Ovchinnikov often thought that the wind had changed direction. In reality, the wind vane had turned with the ice floe along a vertical axis so we had to realign the wind vane accordingly. Sometimes, we had to do this every day, especially in August when the ice floe was surrounded by water.

July was the warmest month, with temperatures reaching plus 3 degrees Celsius. And the lowest temperatures (minus 49 degrees Celsius) were recorded in February. It may be interesting, but, in late 1954, ambient air temperatures went up to minus 5 degrees after a spell of freezing weather. But the thermometer would drop again to minus 35 degrees 24 hours later. The wind constantly changed direction and frequently exceeded 20 meters per second.

Cloudy weather prevailed in the summer, with fog often setting in; but it was quite rare in the winter. 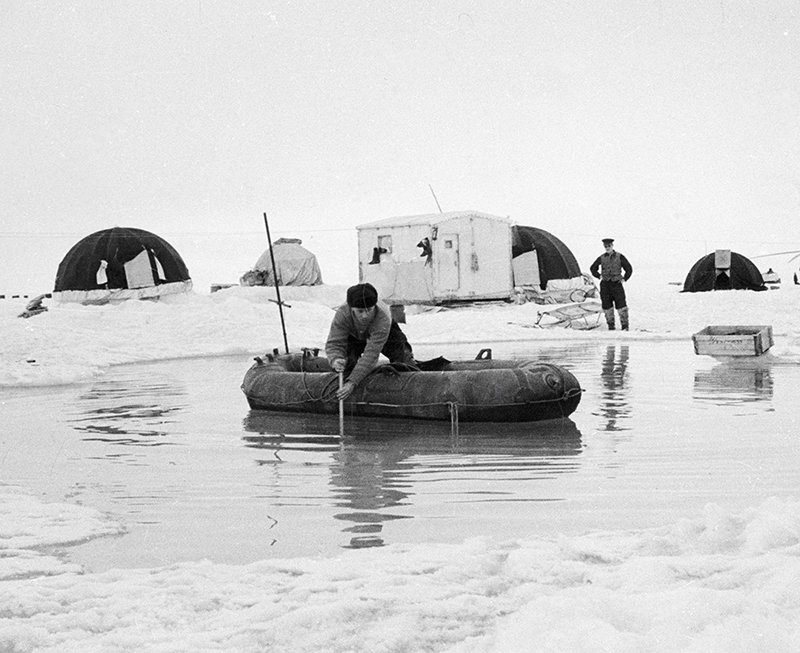 Hydrologists measured ocean depths over 750 times. The shallowest and deepest soundings were 293 and 3,286 meters, respectively. These measurements revealed some distinctive seabed terrain features in the eastern section of the Central Polar Basin. For example, it was established that a huge depression, located north and northeast of the Chukchi Sea (up to 4,000 meters deep) was linked with the small Beaufort Sea depression, over 4,500 meters deep, via a narrow deep-sea strait.

Our hydrologists also took 23 soil samples. Studying them illustrated the evolution of the Central Polar Basin and the makeup of the adjacent shores.

We encountered polar bears for the first time in late April 1954. The incident happened at night [according to our schedule], although the polar day had already set in. Everyone, except the camp's duty officer, was asleep.

Somehow, I heard him calling out to me. I jumped up, ran out and saw a female bear and two cubs standing about 15 meters from our waste dump. We didn't want to kill the mother so we just stood and watched

The camp's "janitor," a dog named Anton who never barked, also noticed the bears and walked toward them. The female bear also closed in. We had no right to let her enter the camp, and so, the duty officer shot her when she was five to six meters away. She fell down, and the members of our team woke up. Everyone rushed out, our youngsters tried to catch the cubs who proved remarkably fast and agile. At last, they were caught and placed in a cage. They were airlifted to the mainland some time later.

To be honest, we tried not to shoot the polar bears; we mostly drove them off by firing flares, which usually scares them.

We also studied the deep sea animal world. Special nets always yielded diverse specimens of the ocean fauna. For example, we discovered a new species of crawfish measuring about five centimeters long with 20-centimeter-plus feelers at a depth of 750–2,000 meters.

We scooped up living organisms from the seabed during our long drift. But the number of these diminished, as the depths increased. Only one seabed specimen was caught at over 3,000 meters deep

Deep sea hydrological equipment was regularly used. In the long run, these observations provided us with interesting data on the thermal properties of the ocean waters and their chemical composition. Hydrologists managed to detect the influx of the Atlantic Ocean's waters into the continental bank's northern boundary.

Team members collected substantial material about the melting of ice formations and their accumulation. They also explained the accumulation of ice bumps or the so called "ram foreheads." Our experts obtained data for studying freshwater basins among ice formations, as well as additional evidence on the formation of submerged ice floes.

We took some interesting data while studying the North Pole 2 station's ice floe. Pilot Maslennikov located it in May 1954, and our experts visited the floe in June. They saw the station's bleached-white tents standing intact like mushrooms on ice bumps. 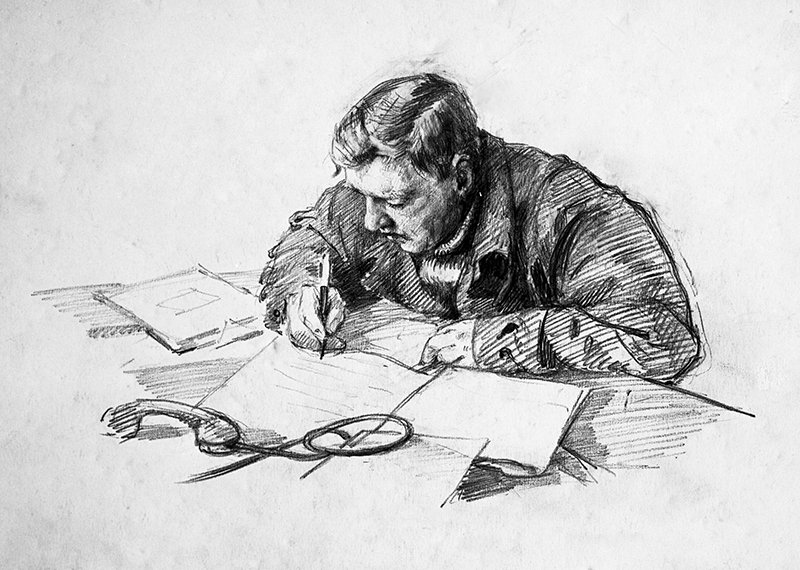 The meteorologists and aerologists collected a lot of research data. They made over 3,000 observations during the expedition, as well as about 2,500 additional observations. These observations expanded our knowledge of the Arctic climate and weather. For example, it was established that colder weather along the North Pole 4 station's drift route during the year coincided with the winds blowing in the northeastern sector. And summer warming coincided with the winds blowing in the southwestern sector.

The crews of the North Pole 3 and North Pole 4 drifting stations launched weather balloons two times a day during the entire drift to measure temperatures in high-level atmospheric layers. They also measured high-altitude wind speeds and directions. Aerologists launched over 770 balloons with radio transceivers that ascended to an average altitude of 18 kilometers.

Balloons, a plane and a helicopter carried instruments for studying the lowest atmospheric layers for the first time

During our one-year expedition, we conducted about 850 actinometric observations to monitor the Sun's radiant energy, scattered radiation and ice radiation.

The North Pole 4 station drifted in an area with little-studied magnetic properties. Data collected by magnetologist Delarov were highly significant for studying the terrestrial magnetic field and compiling magnetic maps of the eastern Arctic sector. Continuous long-term magnetic-variation observation data is the only material for evaluating the seasonal changes of the planet's magnetic field in this sector of the Central Arctic.

Dr. Palyayev reached some interesting conclusions about human body changes as a result of these long Arctic expeditions.

It should be noted that the North Pole 4 drifting station's radio transceivers operated without a hitch; we maintained permanent contact with the mainland. This was due to the reliable equipment and the right choice of communications systems based on a good knowledge of the propagation of radio waves in the Arctic and skilled radio operators.

The North Pole 4 station's crew worked on the ice floe that the camp was located on and also explored distant areas on a regular basis.

Research projects were also implemented on a nearby ice floe that had a different age and which temporarily received aircraft from the mainland. At first, this ice floe was located 3.5 kilometers away from us, but the distance later increased to 25 kilometers when the number of ice floes decreased dramatically in our drift sector, and when ice formations surrounded by clear water were around.

We maintained communications using a helicopter or an AN-2 plane. The number of research bases increased to three when our hydrologists boarded helicopters and flew 100–150 kilometers from the drift line, doing research there.

We often inspected the ice floe's vicinity on foot within five to six kilometers from the camp. We did it mostly on polar nights.

Sometimes we laid telephone lines up to four kilometers long to communicate with temporary bases. Naturally, these lines were often ruptured by shifting ice and had to be repaired. Radiotelephone communications were established when it proved impossible to restore the lines.

Our work in this remote area allowed us to collect lots of valuable and interesting research data, but there were difficulties and unexpected situations. Once, during the dark hours the ice pressure began to build rapidly when some of our team members were at a reserve base. Several cracks ripped the ice floe into pieces that quickly drifted apart. Although one of the cracks passed near the helicopter, the crew was able to move it to a safe area.

While walking on newly-formed ice floes during the polar nights, we could sometimes see sections crack apart right under our feet. This process was accompanied by various loud sounds, like the humming of a swarm of bees or a roaring train or plane.

Our ice floe drifted in the ocean for two more years. Gordiyenko who headed the second station crew was later replaced by Dralkin and his small team. The North Pole 4 station's ice floe drifted in the ocean for quite a while along a complicated path. The members of the three-year expedition collected lots of valuable research data that helped scientists learn previously unknown natural phenomena trends in the Arctic.

Excerpts from the chapter, North of Wrangel Island, are part of the Twelve Heroic Feats collection.
Hydrometeorological Publishing House, 1964