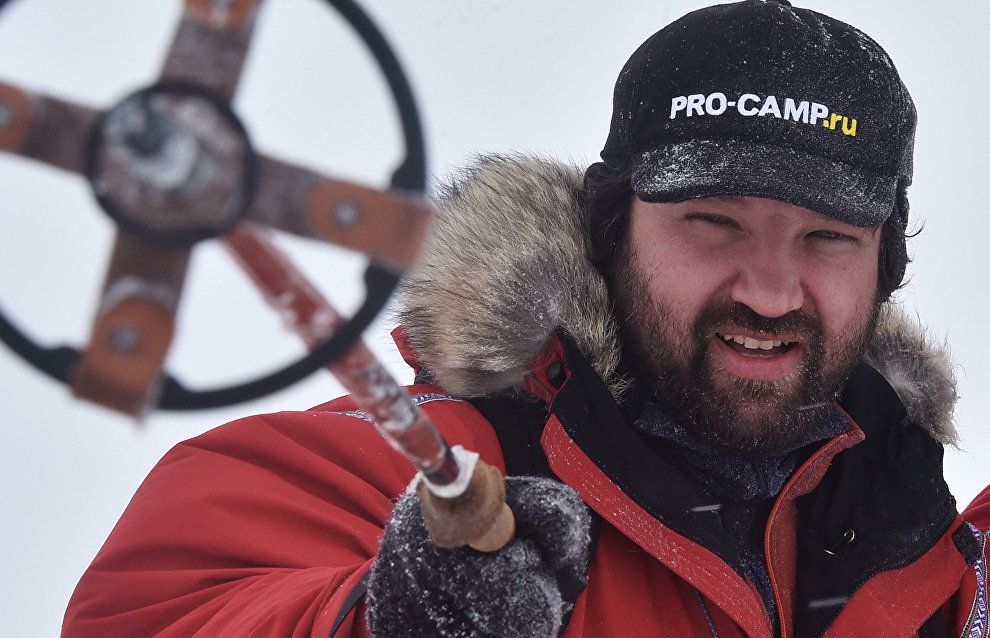 Matvei Shparo: We give children the opportunity to travel and get to know their country better

In 2015, the 8th national youth expedition Skiing to the North Pole involved the champions and prize winners of national school Olympiads and winners of regional intellectual competitions, as well as Russian Minister of Education and Science Dmitry Livanov. Famous traveler, polar explorer and founder of the Great Adventure youth camp Matvei Shparo supervized the expedition.

The arctic.ru editorial staff interviewed Matvei Shparo about the expedition's initial concept, about who plays rugby and who plays soccer on the North Pole and why it's so important for children to travel.

Arctic.ru: How was the idea of the Skiing to the North Pole expedition conceived?

Matvei Shparo: It all began in 2008. My friend Boris Smolin (a member of the Adventure Club, polar explorer and expert on expedition gear and clothing) and I made the first-ever expedition to the North Pole during the polar night. Our 86-day journey was probably among the most difficult global sports trips in this millennium. It was very difficult; we had to drag heavy sleds, we were completely isolated and we had to travel in complete darkness. Our biological clocks went haywire, and we even started hallucinating… In effect, we had a very hard time. To distract ourselves, we had to keep active and think about something. Boris and I are very good friends, we've traveled a lot together, and we understand each other very well. We had already talked about everything with each other, including our friends, children, wives and work. So we had to come up with something completely new. That was how our new project, the national youth expedition Skiing to the North Pole, came into being. First we came up with the name, then we started thinking about the details, how to implement the project, how many people the group should have, the distance to be traveled, the starting point and so on.

As I see it, the project turned out successfully. I believe that it's quite useful for the country, for young people and our children. This project helps raise public awareness of the Arctic, but most importantly, it allows children to travel. Children should know their country. Moreover, overcoming the various problems and trials in the Arctic builds character. And this is probably the most important thing for young people today.

Arctic.ru: How many people were involved in the expedition? How do you select the participants?

Matvei Shparo: Until early 2015, the Ministry of Sport was our partner, and it issued regulations for selecting expedition participants.

First, young people had to send us applications including a short essay on their journey to the North Pole, illustrating what they imagine a journey to the North Pole would be like. They also had to submit documents proving that they have participated in hikes. These documents are issued to anyone involved in such hikes. As this is a skiing expedition, the young people should prove that they have taken part in skiing competitions, including the Russian Ski Track event. We are not demanding any prizes or awards from anyone, because this doesn't matter. What's important is that you were not scared, you grabbed your skis, pushed off and rode several kilometers. This shows that they know something about skiing, snow and physical exertion.

After that, we look at all the applications that have been submitted, and we choose about 40 people out of 200-300 applicants. We invite them for a training session at our Great Adventure youth camp in Karelia, which was established 15 years ago. The camp is open all year round, and children, teens and young people staying there learn how to travel. Each summer, they sail along rivers, ride bicycles and hike. In the winter, they ski and ride dog sleds.

Arctic.ru: How long does the training session last?

Matvei Shparo: Ten-day training sessions take place each March. During this time, young people should take part in a difficult, category-one ski trek through the Karel taiga. First, they are divided into several groups of about ten people each. Each group is guided by two professional coaches/instructors. On the one hand, instructors engineer additional obstacles for young people during the hike in accordance with the curriculum. And, on the other hand, they assess the relations within the group, their physical condition and each person's individual qualities. After each training session, we receive and analyze a lot of material. We assess their physical fitness levels, instructors' marks, aptitude for travel, teamwork capabilities and ability to make independent decisions. After summing up all these parameters, we select seven young people aged 16-18 who will take part in the expedition, and two for the standby reserve.

Arctic.ru: Do you mostly choose boys or girls?

Matvei Shparo: One of our expeditions involved four girls and two boys. Each expedition involves at least two girls. We have two rules. First, we always strive to choose both boys and girls. Second, we want the seven expedition members to represent different regions.

Arctic.ru: Tell us about the expedition route. Where did you initially land, and how many kilometers did you travel?

Matvei Shparo: We took off from Moscow, landed in Svalbard and reached the North Pole — 2015 drifting station aboard the second plane. Once there, we boarded a helicopter and flew to a point located 110 kilometers from the North Pole. In fact, we planned to cover precisely this distance.

While staying at the polar station, we assess weather and wind condition forecasts and projected ice movements in order to choose the best starting point, to get an idea of what lies in store for us and to plan the route. Ice floes should always drift in the direction of our travel, not the other way around, which would hamper our progress. By the way, Arctic skiers often travel much longer distances, assisted by drifting ice.

Arctic.ru: What problems did you face during the expedition? Were there any force majeure situations?

Matvei Shparo: I don't remember anything extraordinary, which means that everything is okay and according to plan. Fortunately, there were no force majeure situations.

Arctic.ru: Do polar explorers have any rituals? How did you celebrate after reaching the North Pole?

Matvei Shparo: All polar explorers have more or less the same rituals. For some reason, people very much like to play football on the North Pole, including the crews of nuclear icebreakers, tourists and polar researchers. Everyone plays football.

But my expedition members and I play rugby. As I see it, young people like this contact sport most of all. They like to catch someone and take him or her down.

Polar explorers also set up ice cylinders or something else to symbolize the Earth's axis on the North Pole. This is a traditional ritual. After that, everyone has fun according to their imagination. For example, they pour motor oil or cooking oil under this "axis" to make the planet spin faster. They can also draw a circle with parallels and meridians on it. Therefore anyone who runs along this circle crosses all meridians and travels around the world.

Matvei Shparo: I don't think that such physical loads are bad for the body. Some hikes for school students are much more exhausting. Therefore my personal experience and the several thousand kilometers that I have traveled in the Arctic show that these loads are quite reasonable. We would probably not organize such expeditions if the loads were excessive.

Arctic.ru: Minister of Education and Science Dmitry Livanov took part in the 2015 expedition. Did he travel the whole way with you?

Matvei Shparo: Yes, he did. I want to stress that we somehow manage to create news-making events around this expedition. This year's expedition involved Livanov and top-scoring Grade A students. The 2014 event involved young people facing difficult situations and Pavel Astakhov, the Children's Rights Ombudsman.

To my mind, young people become more motivated when such important people accompany them. For example, many children learned that Livanov took part in the expedition together with school students, their peers. And this changes their attitude toward education and the country.

Arctic.ru: Will you organize another expedition next year?

Matvei Shparo: We are planning another expedition to the North Pole in April 2016. Starting September 1, a photo exhibition is scheduled to be held in cities where participants in the latest expedition live.