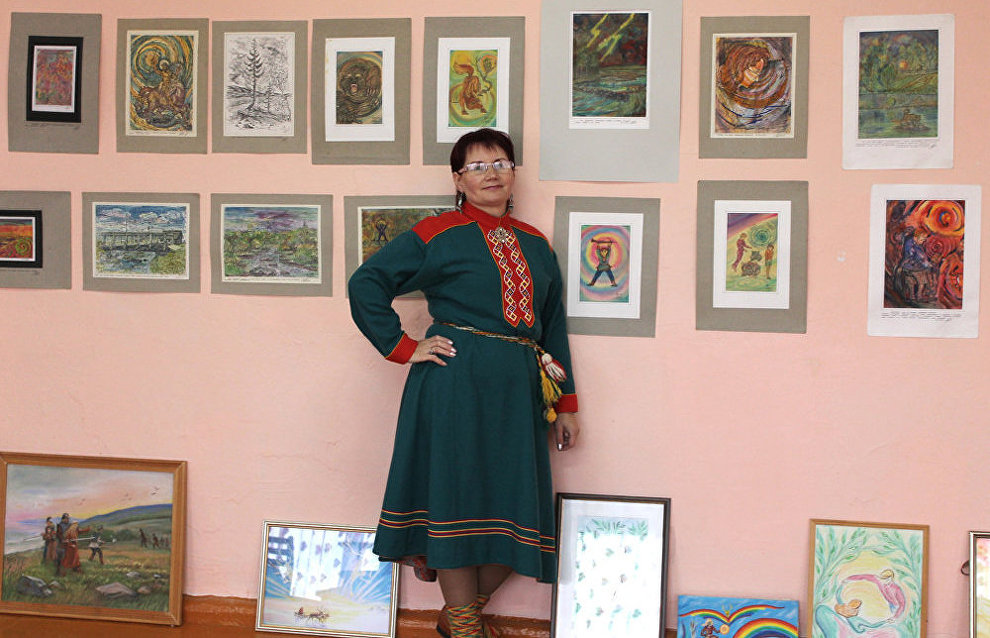 The Saami are a small Finno-Ugrian ethnic group living in Russia, Norway, Sweden and Finland. Arctic.ru has interviewed Valentina Sovkina, speaker of the Saami Parliament of the Kola Peninsula and director of the Kola Saami Radio Co. Ltd., to discuss various problems in the organization’s work and in the life of the modern Saami.

Ms. Sovkina, the media has reported that the parliament's work is now being hampered. What seems to be the problem?

Our parliament is called Kuellnegk Nyoark Sam' Sobbar, and we call it a parliament to make things easier because it is elected by our ethnic group. We now prefer to keep silent. A small rotation has taken place inside the Saami community. The Third Saami Congress was held in 2014, and our parliament disagreed with a decision to organize this event. The right of appointing delegates was violated, and we believe that the congress amounted to an information meeting of legal entities and representatives of government agencies. Therefore, we did not step down, and we continue to work as before.

The Saami Parliament of the Kola Peninsula was established in 2008 during the First Saami Congress and confirmed its status in 2010 during the Second Congress of the Murmansk Region's Saami Community. This was done to consolidate all Saami public activists. We decided to take an active part in all events and to defend the rights and freedoms of the Saami ethnic group.

What projects did the parliament implement?

It was decided to study the legislative framework regarding indigenous ethnic groups. We suggested drafting a regional law on the Saami indigenous ethnic group of the Murmansk Region and to take an active part in the events being suggested by legislatures and Saami public organizations. Every February 6, we inform people about their hunting and fishing rights and career training courses, and we also do our best to preserve the Saami language.

Finland, Sweden, Norway and Russia celebrate National Saami Day every February 6. We celebrate this day as one single ethnic group. Every February 6, we exchange information about developments in our respective countries, including legal aspects. As of late, they are trying to turn this holiday into a festival or a fair. Members of our parliament believe that this is a political, rather than a cultural event. In our opinion, we should raise public awareness of the mechanism for implementing people's rights, we should talk about the people and about preserving and developing their traditional lifestyle during this event. But the media claims more and more often that we receive subsidies and benefits, and media portray us as socially dependent spongers.

Do government agencies recognize your status as a small indigenous ethnic group?

Article 21 of the Murmansk Region's Charter formalizes our status as a local ethnic group. Currently, we depend on a document that should confirm our status. We have requested benefits from several agencies. For example, fishing quotas are issued on the basis of birth certificates and fishing requests. But prospective holders of hunters' cards have to confirm their ethnicity and present marriage certificates. The latter documents sometimes even list the ethnicity of husband and wife. This issue remains unresolved. People involved in this red tape don't want to deal with officials and prove their ethnicity.

How are the Saami doing today? Does their handicrafts industry prosper?

Practically, a third of our population — there are 1,599 Saami in the Murmansk Region — lead a traditional lifestyle. They are mostly engaged in reindeer breeding, fishing, herb collection, hunting and ethnic handiwork. Reindeer breeding remains popular, but animal ownership has changed somewhat. Private reindeer graze at production cooperatives. Reindeer are quite unique, and all their components are used up completely, leaving no waste. There can be no Saami without reindeer and without our native language. This is how we live.

Some Saami communities were established to preserve and expand the reindeer reeding sector, but the land-lease issue remains a problem. In an effort to survive, our communities keep reindeer for attracting tourists. The issue of tourism is now being raised at every level, and the Saami can play an important role in this respect.

How do you use antlers and hooves?

Young reindeer velvet antlers contain all essential substances that slow down aging in humans, improve memory, intellect, eyesight and potency. Unossified antlers are used to make powders and liquid medications. The antlers of adult reindeer are mostly used to make ornaments and musical instruments. Hooves are an important ingredient of meat jelly and jellied minced meat. They are also used to make musical instruments resembling bells.

Do the Saami wear traditional ethnic clothes every day?

How does the local tourist industry develop?

They have been discussing this issue rather actively nowadays, especially in the context of the Arctic's development. As I have already said, we have established Saami communities that receive tourists and organize guided tours. The Ethnic Cultural Center in Lovozero provides an insight into the cultures of the inter-related Saami and Komi ethic groups. In reality, this is just another chance to tell everyone about our unique culture.

Have you been receiving more tourists lately?

There were very many tourists about 20 years ago when the borders opened up. At that time, we perceived certain opportunities for developing this sector. But people lost interest later on, and the tourist industry became neglected. We have started receiving more tourists this year with the help of the Internet and advertising, including a lot of people from Spain, China and France who are interested in our culture.

We need to popularize and show off our unique culture more actively.