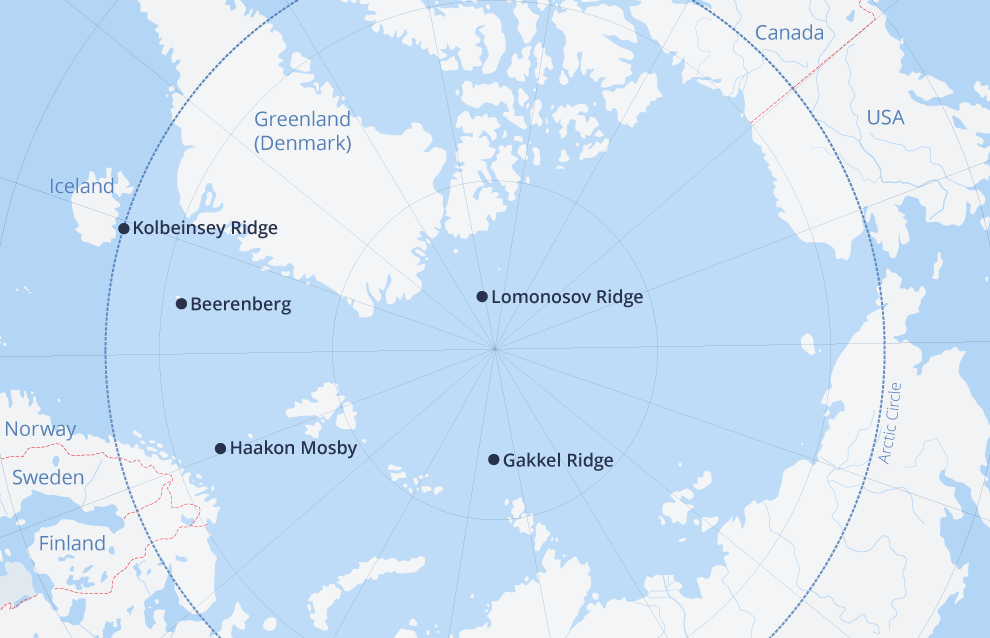 The vast Arctic region covers an estimated 27 million square kilometers and includes five active volcanos. Research expeditions from various countries have uncovered much about these volcanic systems, but they hold many more secrets that are yet to be found.

Haakon Mosby, an underwater mud volcano, on the bottom of the Barents Sea between the Norwegian coast and Medvezhy Island, is the most unusual of them. It was discovered in 1995 by members of a Norwegian-US expedition aboard the ship Haakon Mosby and was named after it. Located at a depth of 1,250 meters, the volcano is about 1,500 meters in diameter. It mostly spews mud and gases, with methane accounting for over 99 percent of the emissions. This volcano's eruptions typically last several days, accompanied by earthquakes and rumbling underground sounds. Although mud volcanoes are much weaker than their fire-breathing counterparts, they, too, can inflict damage when letting loose.

The world's northernmost active volcano is also in the Arctic, on the northeastern tip of Jan Mayen Island between the Norwegian and Greenland seas. It towers 2,085 meters above the sea and is a typical stratovolcano. Stratovolcano family volcanos have tell-tale conic profiles and that consist of several hardened lava and volcanic ash layers, that are covered with glaciers. The volcano was considered dormant for a long time until it erupted in 1970. Its last eruption was recorded in 1985. The volcano is named Beerenberg meaning Bear Mountain in Dutch because polar bears were sighted on the slopes in the late 17th century. They continue to roam the area, with volcanic smoke and soot scaring them off from time to time.

One of them, Kolbeinsey Ridge, is located in Iceland, about 100 kilometers from Kolbeinsey Island which is also part of the ridge. This mountain system remains active. For example, Kolbeinsey Island was 700 meters long in 1616. By 1985, it had shrunk to 42 meters in length and stood five meters high. The island might completely submerge by the end of the 21st century. The first evidence of volcanic activity dates to 1372. Another eruption was recorded in 1755, and the latest officially recorded eruption took place in 1999, although local residents claim that small earthquakes measuring up to three points on the Richter Scale are common here.

The Lomonosov Ridge, another underwater Arctic mountain range, stretches for 1,800 kilometers between Ellesmere Island in the Canadian Arctic Archipelago and the New Siberian Islands. Discovered by the Soviet high-latitude expeditions in 1948, the ridge is 60-200 kilometers wide and towers 3,300-3,700 meters above the sea-bed. The depths beneath the ridge are near 954 meters. During research expeditions, scientists managed to locate volcanic glass crystals (quick-hardening lava fragments) at the foot of the ridge. This proves the existence of an active volcano.

Researchers are particularly fascinated with Gakkel Ridge, named in honor of famous oceanographer Yakov Gakkel who discovered it and who also compiled the first bathymetric map of the Arctic. Located between the eastern tip of Greenland and the Laptev Sea, this mountain system features nearly parallel ranges and many mountains consisting of volcanic rock.

In 1999, a series of powerful underground tremors was recorded near the mountain range for the first time. Two years later, the first expeditions left for the tentative quake epicenter. At that time, scientists could only prove the existence of submarine volcanos, while also recording new quakes. In 2007, members of the third expedition discovered various traces of volcanic activity over an area of almost ten square kilometers. What surprised scientists most was that the eruption took place four kilometers beneath the waves, whereas similar eruptions are usually recorded not more than three kilometers down.

Scientists suggest a huge chamber filled with carbon dioxide formed over the lava "lake" beneath the seabed. The lava contained ten times more gas than previously observed eruptions in underwater mountain ranges. The gas eventually left the red-hot magma layer and filled the chamber. In 1999, a series of earthquakes tore the chamber apart, sending gas and magma to the surface and littering the vicinity with fragments of the chamber's "roof." According to experts, the chamber was several kilometers beneath the seabed; and gas-and-lava fountains apparently reached an altitude of at least 2,000 meters above the seabed.