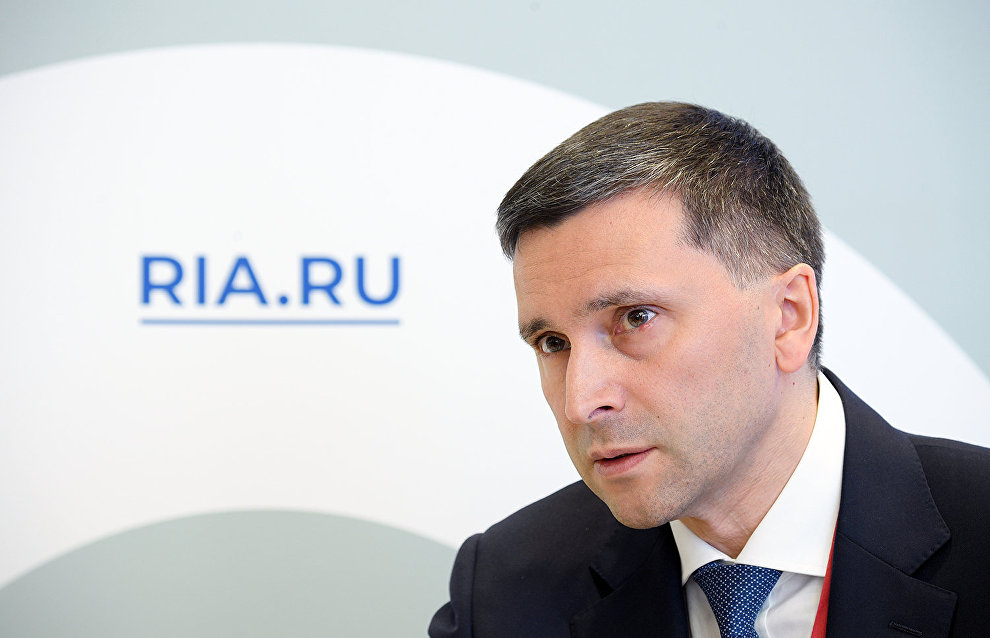 The northern countries should determine the Arctic’s future, and all others should merely be invited to the region, Russian Minister of Natural Resources and Environment Dmitry Kobylkin noted in an interview. Speaking to RIA Novosti special correspondent Igor Yermachenkov, Kobylkin discussed the creation of a “whale hospital” to replace a “whale prison,” plasma waste-incineration and the Northern Sea Route’s future freight volumes.

Is it possible to say that the all-out Arctic clean-up operations, initiated by a presidential decision in 2011, are ending?

This work is still underway. Apart from the federal plans, each region has its own program. Mining companies are also showing a different attitude toward nature. We should be proud of the Russian companies working in the Arctic, what they are doing. In the next few years, we will compile a database of best practices. The Arctic must not look worse than other Russian regions because it is now serving as this country's façade.

What are you planning?

The Ministry of Natural Resources and Environment is now working to eliminate current negative impact. While implementing the Clean Cities program, companies operating in Norilsk, part of the Arctic zone, are to reduce sulfur oxide emissions by 75 percent by 2023. Companies operating in the Krasnoyarsk Territory have signed a memorandum on cooperation and investment projects facilitating more environmentally friendly production. Total investment volumes are estimated at 584 billion rubles.

Arctic clean-up operations are part of the Environment national program; we are looking to the experience of previous exploration and development projects while setting new strategic long-term goals. We will complete all this.

Everyone can remember a video showing many polar bears eating at a waste dump in the Novaya Zemlya Archipelago. Isn't it time we launched "waste reform" in our Arctic frontier and in remote towns?

The first thing I said when I went to Novaya Zemlya was that it was necessary to read laws. Any facility should be fenced off, and we need to eliminate any unauthorized waste dump. Naturally, our plans include all this. Any region, including the Caucasus, the Far East or the Extreme North, must implement these projects. Obviously, it's easier for the bears to ransack a waste dump than to go hunting. At the same time, it is forbidden to shoot them. No one, except the local authorities, can accomplish these goals. The local authorities must control the situation and enforce the law.

What waste disposal technology is best for the northern regions?

Of course, plasma incineration is an ideal method. We have such systems that are not widely used so far. We are now signing an agreement with the National Research Center Kurchatov Institute. Of course we would like to convert as much waste as possible into heat for the Arctic population.

As long as we're on the subject of Arctic animals, we can't overlook the orca killer whales held in a "whale prison." An international scandal has flared up. Can we hope that the authorities have reached the right conclusions, and that they will prevent these "prisons" in the future?

It would be nice to create an alternative to these enclosures at the international level. Russia will resolve this matter at the legislative level. After the situation is resolved, I'm confident we'll set up a rehabilitation center in Srednaya Harbor. It will be possible to accommodate sick, wounded or stray animals in need of human assistance. Our colleagues from CITES (the Convention on International Trade in Endangered Species of Wild Fauna and Flora) are also looking into this.

People must help these animals until they recover, and eventually set them free. We have discussed the creation of such a "whale hospital" in natural surroundings with Jean-Michel Cousteau.

No normal person would respond positively to this "whale prison" story. We have involved national experts, as well as international experts, and we have also invited Jean-Michel Cousteau. No animals have ever been released on such a mass scale before. Cousteau thanked us for the invitation and said that it was a great honor for him to take part in this experiment. We still have a lot of work to do. Instead of finding the culprits, we have to save the animals and return them to their habitats; this is the most important thing. And the investigators will find those responsible.

How is the Trans-Arctic 2019 expedition going? When will it be possible to unveil the initial results?

It is important that we have launched this project. I would very much like to thank Dmitry Medvedev for his support. The project will allow us to study various places in the Arctic Ocean that we have not researched for a long time. We need this to maintain safe navigation through the Northern Sea Route. We must monitor sea-ice formations, the melting trends and water bodies.

During the expedition's first stage, the scientific expedition vessel Akademik Tryoshnikov, affiliated with the Federal Service for Hydrometeorology and Environmental Monitoring (Roshydromet), has entered a drifting sea-ice formation and continues to float due southeast. An ice floe has been chosen for setting up a camp. Work is underway to organize the North Pole 2019 seasonal drifting station. The research teams will measure greenhouse gas concentrations, cloud levels, meteorological visibility, atmospheric phenomena and soot-aerosol concentrations non-stop. They will also conduct multi-angle ionosphere sounding missions.

The development of the Shtokman gas and condensate field was discussed several years ago, but the project was frozen after the economic crisis and falling fuel and energy prices took their toll. When will it become possible to start developing the deposit?

To the best of our knowledge, the current price situation on global gas markets makes it impossible to implement this capital-intensive project, the development of the Shtokman gas and condensate field, for liquefied natural gas (LNG) production.

When, in your opinion, can the Northern Sea Route start competing with the Suez Canal as a Europe-Asia transit route?

For a number of reasons, the Northern Sea Route will not be able to rival the Suez Canal in the foreseeable future. First, it has sea-ice formations that can only accommodate ice-resistant vessels, escorted by icebreakers in most cases. Transport companies have to spend more on these ice-resistant ships. Therefore the Northern Sea Route's freight volumes will first, grow as a result of Arctic projects.

But this does not mean that the Northern Sea Route has no transit potential. Indeed, the route is shorter and safer. Many consignments can be rerouted to the high latitudes provided that we expand the infrastructure and the icebreaker fleet.

Does Roshydromet plan to reinstate the chain of Arctic meteorological stations?

Of course, Roshydromet has to accomplish this because the Arctic largely affects the entire planet's climate. However, it should be noted that the cost of establishing and maintaining these remote stations is a lot higher than on the mainland. In some cases, Roshydromet sets up automated observation systems whenever possible without impairing the quality of the observations.

But we can also use public-private partnership funding; for example, ships sailing the Northern Sea Route can conduct certain types of observations.

A system of remote sensing satellites needs to be created; this will make it possible to conduct more accurate hydrometeorological observations. We are also hard pressed for satellites. It is high time Russia established a full weather satellite cluster that would eliminate our dependence on our foreign partners in this area. At this point, the Ministry of Natural Resources and Environment and Roshydromet have teamed up with Roscosmos to create more capacity.

How many more weather satellites do we need?

Dmitry Kobylkin: Russia has to launch at least five more satellites for conducting weather observations around the clock. So far, we use foreign satellite data, for the most part. There is nothing too bad about this because we exchange information on a reciprocal basis. But it is necessary to rely on national technology and data sources in line with national security considerations.

When will ship crews navigating the Northern Sea Route be able to obtain accurate weather forecasts in any sector?

Recently, the new North Pole ice-resistant self-propelled platform was laid down at the Admiralty Shipyard in St. Petersburg. It should be done late next year. The new platform will provide us with several observation points to more accurately assess weather conditions and the formation of winds and ice-floes. Of course, all this will influence freight delivery speeds from producer to consumer. The difficult freight delivery environment increases the importance of weather forecasts for establishing ship convoys, simplifying navigation and reducing transportation costs for hydrocarbon feedstock.

I can reply as someone who has spent over 20 years in the Arctic, rather than a minister. I believe that the Arctic means people, in the first place. They say that the Arctic accounts for 25 percent of some mineral deposits. But let's not forget that it is a home to people. And when certain countries decide on specific actions there, they should consider the opinions of the local people. The far North's indigenous population is the real custodian of the Arctic. They have no other territory, and unlike rotation workers, they cannot go anywhere else. These people say that the Arctic Council countries should have the final say on future Arctic matters. And I agree with them. Those countries wishing to take part in Arctic projects can be invited to do so. We don't mind if this is economically profitable. The China National Petroleum Corporation (CNPC) or France's Total have a stake in Novatek's Yamal projects. We don't infringe upon the rights of any national company.

Does Russia plan to expand its research projects in the Spitzbergen (Svalbard) Archipelago over the next few years?

Science projects should not be restricted, and they should have international status. The Spitzbergen Archipelago is our special concern. We have no right to lose this territory, and it is important to us.

The state program The Socio-Economic Development of the Russian Arctic in 2018-2025 aims to build 12 new vessels for the Federal Service for Natural Resources (Rosprirodnadzor) by 2021. How much will it cost to build a nature conservation fleet, if any, and what ships will be laid down?

There are plans for this. Everything will depend on funding. The investment is quite substantial.  Rosprirodnadzor will certainly have to maintain its presence in the ocean and the Arctic. I pray that everything proceeds the way it is today, and that there will be no accidents. And accident prevention is the best approach. Rosprirodnadzor is supposed to prevent accidents, and we intend to strengthen its capabilities in this respect.

The text of the interview is posted on the RIA Novosti website.