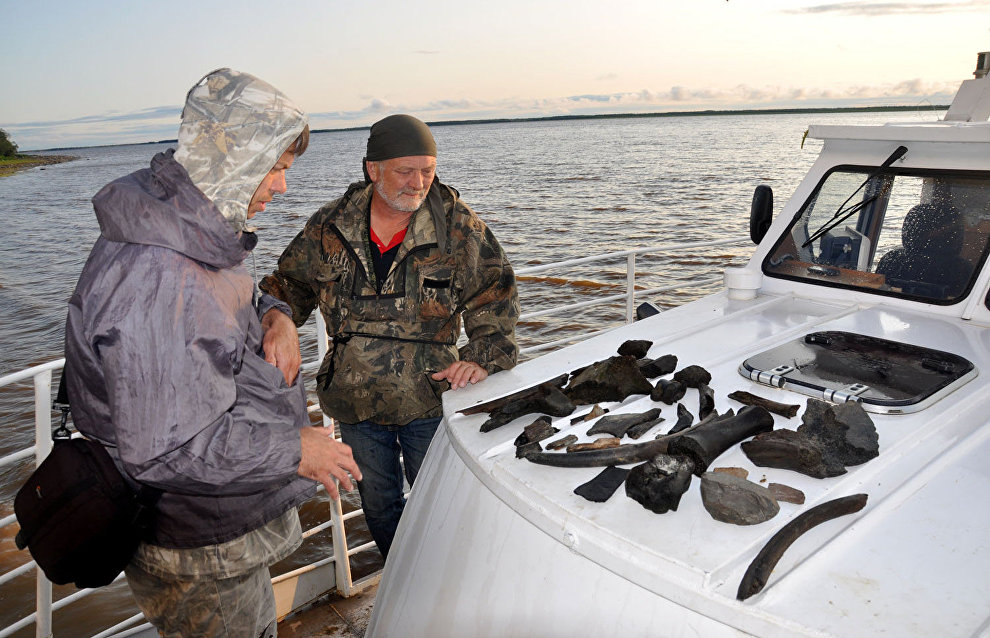 A hypothesis of migration: Ancient people make their way to Western Siberia

Everything starts with a hypothesis

To this day, researchers are unable to say when exactly ancient peoples appeared in the lower reaches of the Ob River (the current Yamal-Nenets Administrative Area) in the north Cisurals and what lands they initially came from. There were no natural barriers to the migration of ancient people 60,000 years ago neither from the east (the Yenisei River valley) nor from the south (along the Ob River valley). The Western Siberian Plain had no swamps at that time; these formed much later. Researchers can only say that so far it is not clear what the migration patterns of these people were, whether they went from Siberia to Europe or the other way round. Today, they have accepted as a working hypothesis the assumption that people could have settle in the northern territories of Western Siberia from different areas, depending on the then-current climatic and land conditions.

This hypothesis on the migration of Paleolithic people from the west to the east (from the Cisurals to the lower reaches of the Ob River) and the possible settlement of people on these territories 90,000 years ago is being jointly verified by experts from several research organizations: the Institute of Archaeology and Ethnography of the Siberian Branch of the Russian Academy of Sciences (IAE), the Sobolev Institute of Geology and Minerology (IGM), and the Budker Nuclear Physics Institute (NPI).

"It was believed until recently that 15,000-25,000 years ago, the north of the Ob River, north of today's Khanty-Mansiysk, was covered by a glacier with a glacial lake to the south," said DScPhD (Geology and Minerology) Ivan Zolnikov, head of the IGM laboratory of geo-information technology and remote sensing.

However, it was later on discovered that the border of glaciation was located to the north of the Arctic Circle, while the glacier and its glacier-dammed lake existed there about 60,000-90,000 years ago.

"The discovery of mammoths in the Mansiysk Lake area indicates the absence of glaciation there and the existence of possibilities for living conditions as distinct from the ice-covered Russian Plain," the researcher added.

According to Zolnikov, there was dry and warm tundra and a steppe zone (periglacial steppe) where many animals, and hence, people, lived. The only question is how these people got there.

"We have assumed that people from the Cisurals could get to the lower reaches of the Ob River through antecedent valleys across the Urals Ridge," Zolnikov said.

Across mountains and millennia

To support this theory, scholars created a digital model of the Urals Ridge and adjacent territories, which they called MERIT. By averaging absolute altitudes, they were able to identify three major routes (wider routes with a slope of less than 4°) and six secondary routes (narrower with a slope of less than 8°) in the antecedent valleys across the ridge. Experts believe that Paleolithic families, including seniors and children, could have undertaken long journeys along these routes. 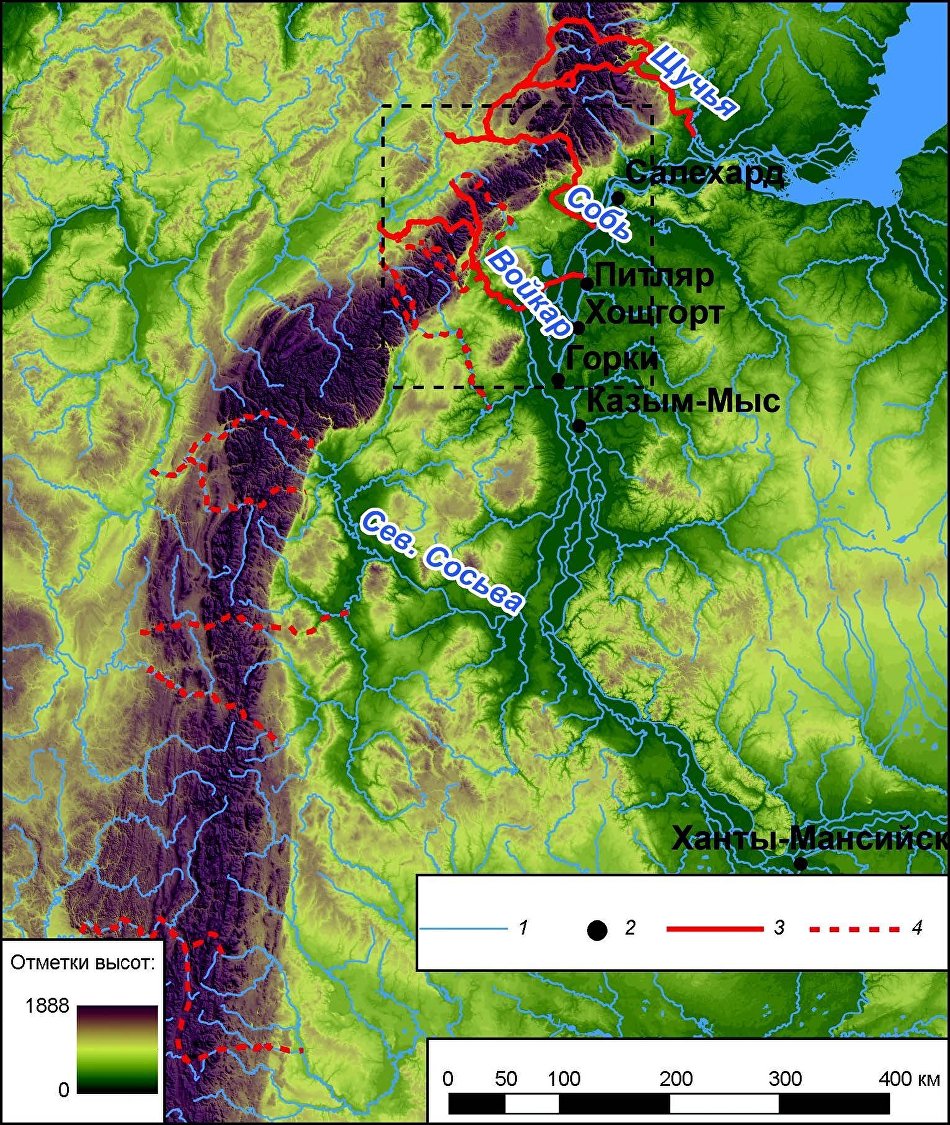 Therefore, it is possible to assert that there were potential migration routes via the northern Urals starting about 60,000 years ago, notably, in the Stone Age when there were no glaciers or ice-dammed lakes there. It is likely that the people started settling in the north of the Ob River Plain from the north Cisurals.

Everything turns into graphite

Artefacts found during the research expeditions in 2019 and the analysis of geological cross sections of earth reaffirmed that, during the Paleolithic Age, this territory was suitable for Homo sapiens.

The carbon-dating of soils and megafauna remnants found by the expeditions was conducted at the NPI AMS Golden Valley shared knowledge center on a unique accelerating spectrometer.

"Archaeologists operate with relative data while the radiocarbon dating method on the Accelerative Mass Spectrometer (AMS) makes it possible to establish the age of a sample. This is our contribution to this study," said NPI Senior Research Associate, Candidate in Physics and Mathematical Sciences Sergei Rastigeyev.

"The AMS analyses every atom in the sample. To establish an exact date, it is necessary to find the radiocarbons, but they are very small. Thus, a 50,000 year old sample will have radiocarbon dating of 10-15. In simple terms, this is the ratio between one grain of wheat and Russia's entire harvest for a year. It's not even as easy as looking for a needle in a haystack," Rastigeyev added.

According to the researchers, for precise dating it is very important to reliably identify and record the radiocarbon atoms from this "haystack" that consists of atoms and molecules in very close masses, so-called isobars because before being analyzed by the AMS a sample undergoes a sample processing step. This complicated process consists of several cleaning stages and takes up to a week.

"Usually we receive samples as they were found. Sometimes we are given whole tusks or skulls," said Candidate of Chemical Sciences from the (IAE) Yekaterina Parkhomchyuk. "But, we need about 100 mg for sample processing and dating," she added.

Samples of megafauna and fossil soils were selected for the study we are reviewing today. Collagen is produced from bones, and humin, an organic substance, is extracted from fossil soils for dating. Both collagen and humin are converted to graphite that can be analyzed on the AMS.

The found artefacts (mammoth tusks with human traces) make it possible to assume that people might have appeared in the north of Western Siberia 50,000 years ago. A radiocarbon analysis cannot determine dates earlier than that.

"The fact that there were mammoths in the low reaches of the Ob River and that, thus, people could have lived there, is not a new discovery. What is new is that now we have a series of dated paleontological finds with which we can see the dynamics of the habitat patterns of mammoth fauna. Moreover, there are human traces on some tusks that we have established an age for." 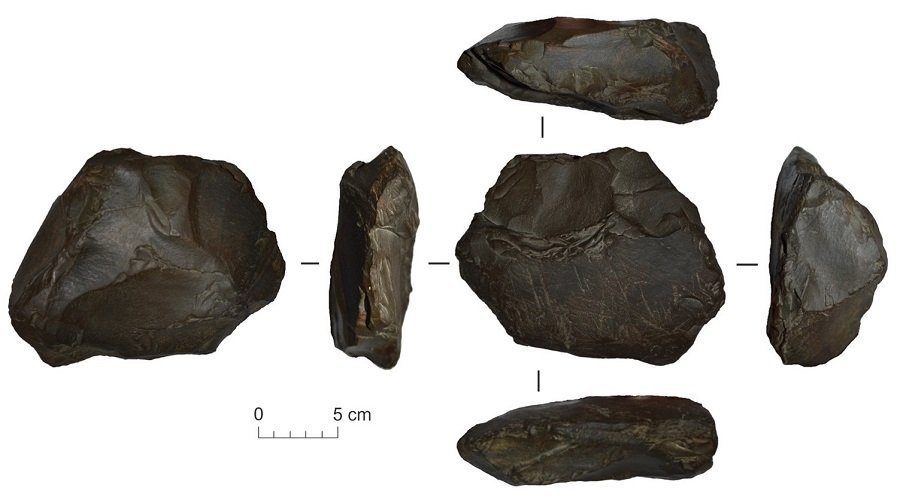 Artefacts found during fieldwork in the summer of 2019. © Photo courtesy of I. Zolnikov

However, during the expeditions since 2016, the experts have only found artefacts on the surface, for instance, river banks onto which they were eventually washed up. In other words, they are not part of a cultural layer and so they are out of context.

To prove the theory that people settled along the lower Ob River, paleontologists must find a Paleolithic site.

"Today, we no longer look for evidence of the existence of people. We have collected a lot of bones dating to the Quaternary age, which show that mammals lived in that territory and which were naturally followed by people. We understand that this territory is not a blank spot," said IAE Senior Research Associate, Candidate of History Alexander Postnov. "Now we must find a context, for example a Paleolithic site (tools, processed bones, campfire sites and the like) or a used mammoth skeleton. We need to know something about their life," he said.

Meanwhile, the experts are more confident in determining when the early presence of Paleolithic man existed in the west and east of the lower Ob River. The existence of people in the Yenisei River estuary 45,000 years ago is clearly illustrated by the mammoth bones with traces of ancient hunting tools, which were found near the Sopochnaya Karga meteorological station. Thus, people appeared near the Yenisei River much further north of the Arctic Circle at least in the era between the Middle and Upper Paleolithic, if not in the Middle Paleolithic. Although Paleolithic sites with cultural layers have not been found in the low reaches of the Yenisei River, there are many Paleolithic artefacts on the western slopes of the Urals, including the polar areas.

Anton Vybornov also noted that the purpose of any archaeological fieldwork is to pursue two goals: to verify a hypothesis and to find materials for new search methodologies. He said both goals were reached by fieldwork in 2019. The hypothesis was confirmed by the artefacts that were found, and by the dating of the soil and the Pleistocene fauna.

"We hope that with time our hypothesis will become the theory that describes how people settled the lower reaches of the Ob during the Paleolithic. Before our expedition to the lower Ob, there were just two dated fossil records. We increased this number by many times. Having tested our search methods, we realized that we had to expand — move beyond the main riverbed, go to divides and study the routes the people used to reach the Ob River, the antecedent valleys," he noted.

However, this project covers a very large and complicated territory. According to IAE Senior Associate, Doctor of History Anton Anoikin, during a short northern summer, paleontologists have to study several hundred kilometers of land in a very difficult region.

"Part of this region is sub-Arctic, another part is subcontinental which borders on the Urals and still another part is formed by the Vasyugan Swamp. A specialist in one area of expertise will not be able to analyze this region and explain how it was settled by ancient people or describe the culture of the Stone Age. This task requires cooperation between researchers from various scientific specialties. This is the only way to develop a comprehensive working hypothesis and achieve real results," he said.

Despite the challenges, this is the first large-scale productive study of the early (Pleistocene) history of how the north of Western Siberia was settled and an important part of fundamental research into the history of the early colonization of northern Eurasia.

In addition to the fundamental value of the study, it is also important for other associated disciplines. The experts have compiled and dated a large collection of animal bones from the Upper Pleistocene and have created a zoological and archaeological data base, a first for this region. With the new artifacts, the researchers can adjust and update various scientific methodologies, including absolute dating, and they can update and correct our ideas on the late stages of relief formation in the north of Siberia.

Studies are conducted as part of the project "Geochronology and paleogeography of the valley of the low reaches of the Ob River in the Late Pleistocene in the context of settlement by Paleolithic people," supported by the Russian Science Foundation. Intermediate results are published in the magazines Stratum and Problems of Archaeology, Ethnography and Anthropology of Siberia and Neighboring Territories.