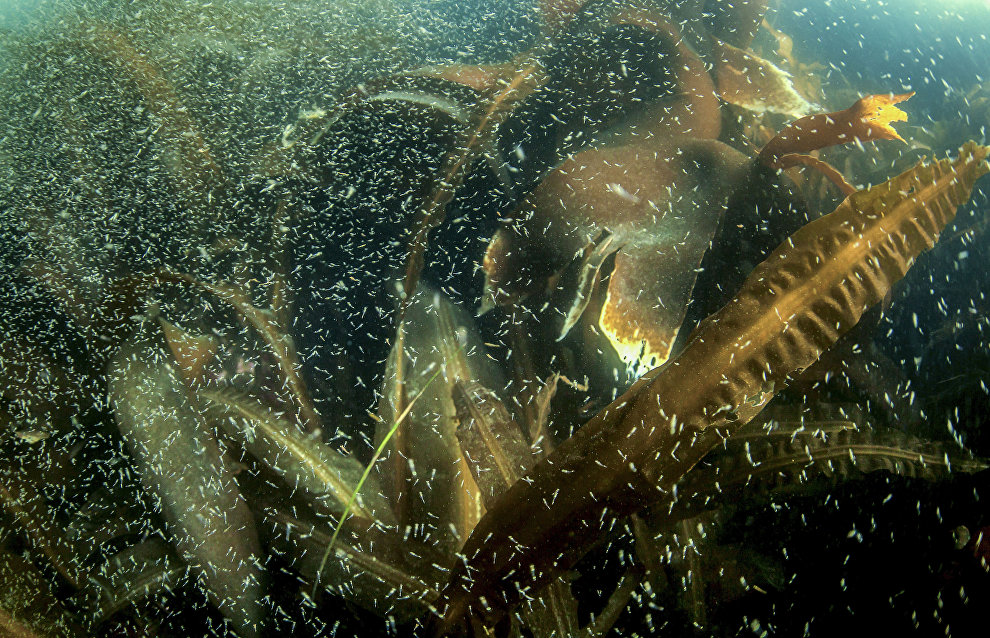 Scientists are registering record growth of phytoplanсton in the Arctic region

The growth of phytoplancton in the Arctic Ocean has increased by 57 percent over the last 20 years and in the meantime phytoplanсton's ability to absorb carbon dioxide has also increased. Earlier, experts attributed this to the disappearance of Arctic ice but scientists from Stanford University have come to the conclusion that today's growth is due to growing algae concentration.

According to experts, this upsurge has replaced sea ice loss as the major factor of changes in phytoplanсton's carbon dioxide absorption.

Kevin Arrigo, senior researcher and Professor of the Stanford School of Earth, Energy and Environmental Sciences says that the growing impact of phytoplancton's biomass can become "a drastic shift of conditions" for the Arctic region, which is heating up much more rapidly than any other place on the Earth.

In this context, the research is focused on measuring how fast plants and seaweeds convert sunlight and carbon dioxide into sugar on which other creatures feed.

"This is important from the viewpoint of how much nourishment is left for the remainder of the ecosystem. And it is one of the main ways of removing carbon dioxide from the atmosphere into the ocean," Arrigo said.

In the process of these studies, Arrigo and his colleagues discovered that net primary production indices in the Arctic region grew by 57 percent between 1998 and 2018. This was an unprecedented productivity shock for the whole oceanic basin. What is even more amazing is that though initially net primary production increase was associated with the loss of sea ice, productivity kept growing even when the rate of the ice's retreat slowed down in about 2009.

"Net primary production increase in the last decade is almost exclusively due to the recent growth of phytoplancton's biomass," the scientist says.

In other words, thanks to climatic changes in the ice cover, these microscopic seaweeds metabolized more black carbon in the Arctic region simply because they received more open water during longer vegetation seasons. Now they are becoming more condensed, like a thickening seaweed soup.

"More phytoplancton grows in this water volume every year. This is the first time when it was reported in the Arctic Ocean," says leading researcher Kate Lewis who took part in the studies as a post-graduate student of the Stanford Earth System Science Department.

At the same time, phytoplancton needs light and nourishment to provide its growth but the availability and blending of these ingredients in the water depend on complicated factors. As a result, even though the Arctic researchers watched the slowdown of phytoplancton's blooming in the last decades, they discussed how long the growth can last and what heights it can reach.

After building a huge new collection of oceanic bloom measurements for the Arctic Ocean and creating new procedures for estimating phytoplancton concentration, the Stanford team discovered proof that the continuing production increase does not have to be limited by nutritional deficiency any more, as was believed before.

"We are only watching the beginning, but it now looks like we are witnessing a shift to a larger offer of nourishment," Arrigo said.

The researchers are putting forward the hypothesis that this new flood of nourishment is coming from other oceans and is carried away from Arctic depths.

"We knew that the growth increased in the Arctic region in the last few years but it seemed that the system just processed the same stock of nutrients. Our research shows that this is not so. Phytoplancton absorbs more black carbon with every year when new nutrients get into the ocean. This was unexpected and it has a large environmental impact," Lewis said.

The researchers managed to obtain these data by measuring the chlorophyll of the green plant's pigment, which was derived with the help of satellite sensors and research groups. But this work demanded new methods because of the unusual interaction of light, bloom and life in the Arctic region.

Partly, difficulty is caused by a huge inflow of tea-colored river water containing a dissolved organic substance which sensors take for chlorophyll. Another difficulty occurs due to phytoplancton's unusual ways of adaptating to the extremely feeble light in the Arctic region.

"When you use global satellite schemes of aerial imaging in the Arctic Ocean you make serious mistakes in your estimates," Lewis said.

But in spite of this, aerial imaging data are necessary for understanding long-term trends in the oceanic basin in one of the places with the most extreme conditions in the world, where only the direct measurement of net primary production can require around-the-clock work of a team of scientists. Kate Lewis says that while onboard an icebreaker she carefully selected collections of ocean colors and measurements for net primary production and then used the compiled database for building algorithms, which have been adapted to the unique Arctic conditions. Both the database and schemes are available for public use.

This work will help define how climatic change will determine the Arctic Ocean's future productivity, its ability to provide food resources and its capability to absorb black carbon.