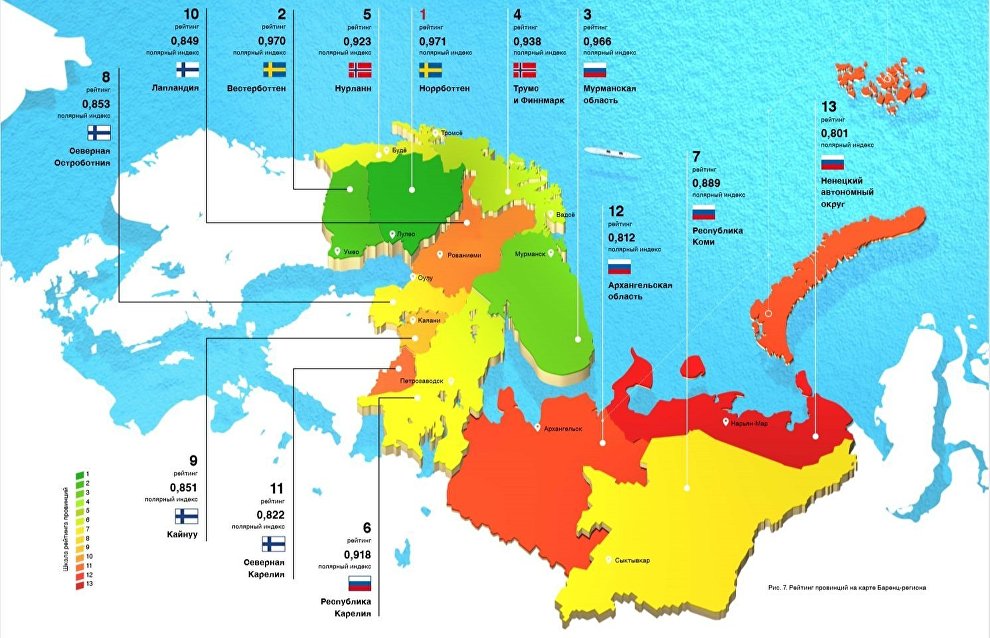 © Project Office for the Development of the Arctic Press Service

The Polar Index of the Barents Region is a joint project of the Project Office for the Development of the Arctic and the Natural Resource Management Economy Department of the Economics Faculty at Lomonosov Moscow State University. The index includes the annual rankings of provinces and companies in the Barents Region which helps evaluate the sustainability of Arctic development at the macroeconomic level. It uses a number of parameters in the economic, social, and environmental areas. This is the second compilation for the index.

The Swedish Norrbotten County (län) ranked first among Barents regions. Lapland, Finland, has shown the best positive dynamics with three points up over the year. Among Russian regions, the best ratio of sustainable development indicators was again shown by the Murmansk Region. The list also includes Troms, Finnmark and Nordland in Norway; Karelia, Komi, Arkhangelsk Region and the Nenets Autonomous Region in Russia; and four administrative districts in Finland: Northern Ostrobothnia, Kainuu, Lapland and Northern Karelia.

"We are glad to see our first attempt was successful. The pilot rankings turned out to be very interesting, including for our foreign colleagues. After a discussion, we have updated our evaluation methods and also decided to release the rankings annually. We hope that the ranking of Barents Region provinces will become a tool to assess sustainable development of Arctic territories, and the ranking of companies an important indicator of the economic, social and environmental initiatives of large businesses operating in the north," said Director General of the Project Office for the Development of the Arctic Alexander Stotsky.

"The rankings encourage all regions to perform better, create a platform for communication and integration and become a tool to involve the public in these processes. Our project is not aimed at organizing a competition but at promoting best practices, setting priorities and developing cooperation," added Professor Sergei Nikonorov, PhD in Economics, Economics Faculty at Lomonosov Moscow State University.

The full ranking of companies and detailed methodology can be found here.