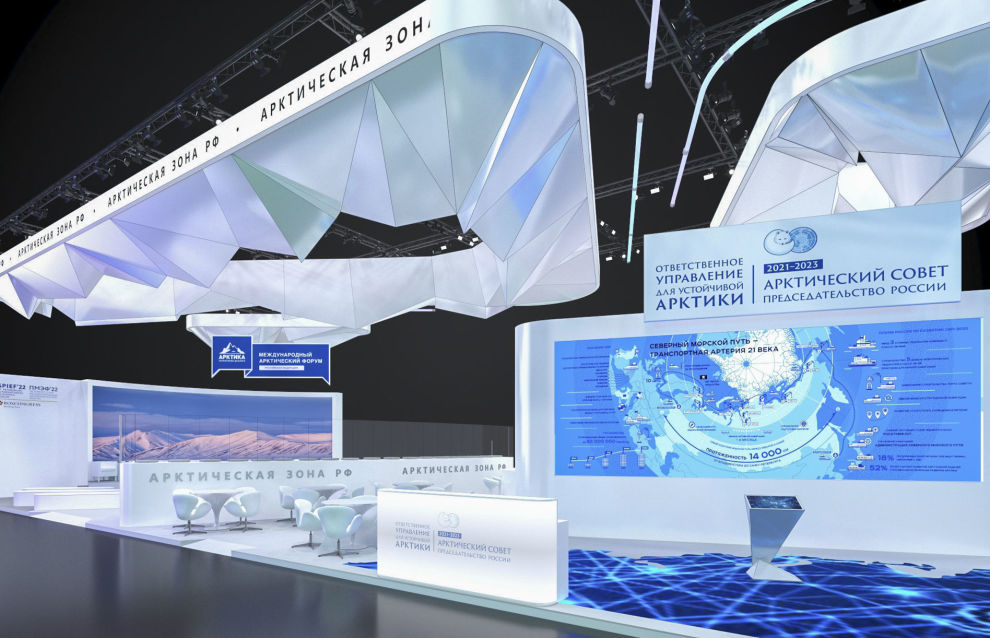 The Arctic: Territory of Dialogue stand, dedicated to the Arctic agenda, will open for the first time at the St. Petersburg International Economic Forum (PIEF), which will be held on June 15-18, 2022. The stand’s business program offers over 15 events, including those that are part of Russia’s chairmanship of the Arctic Council.

“Leading specialists and experts involved in the stand’s events will discuss regional economic development, environmental and tourism issues, creative industries, the development of the Northern Sea Route and the Arctic’s human resources, including Northern indigenous peoples. A number of agreements will also be signed at the stand,” said Anton Kobyakov, adviser to the President of the Russian Federation and executive secretary of the organizing committee in charge of preparing for and supporting Russia’s Arctic Council chairmanship.

A conference on the development of the Arctic telecommunications and digitalization will become one of the stand’s main sessions. Its participants will discuss the introduction of digital technologies in the region, the use of telemedicine and unmanned transport systems, as well as other subjects. Those attending a seminar on Arctic shipbuilding and ship-repair projects will talk about expanded ship-repair services in the Arctic and efforts to build more ice-resistant ships. Participants in the PIEF’s creative business forum will discuss the prospects of creative industries in northern territories.

The Arctic: Territory of Dialogue stand will also feature a session on the Northern Sea Route as an international transport corridor. The participants will speak about the influence of this route on the Russian Arctic’s economy, opportunities for developing their own territories with the help of the Northern Sea Route during sanctions pressure, as well as prospects for strengthening partner-like relations with friendly countries.

“Today, the Arctic and the Far East are implementing over 3,000 investment projects using state support mechanisms, and the Northern Sea Route’s freight traffic volumes continue to expand each year. This route is becoming more and more important amid foreign sanctions pressure and economic transformation. Forum participants and we will discuss the most rational and effective solutions that make it possible to accomplish transport and logistics tasks, to ensure the security of shipping and to send the required freight shipments to residents of remote Far Eastern and Northern territories under the Northern Delivery program,” Russian Minister for the Development of the Russian Far East and Arctic Alexei Chekunkov noted.

Those involved in the Think Arctic project at a session on international cooperation for sustainable Arctic development will discuss the region’s significance for international politics and the global economy, now that the Arctic is becoming more accessible, as well as its role in the context of the global energy transition.

Participants of The Arctic: Territory of Dialogue Forum will talk about the Arctic’s investment potential as a separate subject. The leaders of nine Russian Arctic territories will organize presentations for investors. Those attending a session on Arctic investment projects and preferential treatment will review the operation of the world’s largest special economic zone, climatic features of Arctic regions, as well as regional investment specifics.

The stand’s business program also includes themed sessions on tourism, nature conservation and science. Participants in a panel session dealing with the Arctic as an area for tourism will focus on prospects for the development of the Arctic tourism industry, and will also assess the demand for Arctic tours, their cost and influence on tourist traffic. Those attending a session on climate change trends and risk management in the Arctic will discuss the state of permafrost layers in conditions of climate change and the organization of Arctic research projects, including the use of scientific expedition ships and the North Pole ice-resistant self-propelled platform.