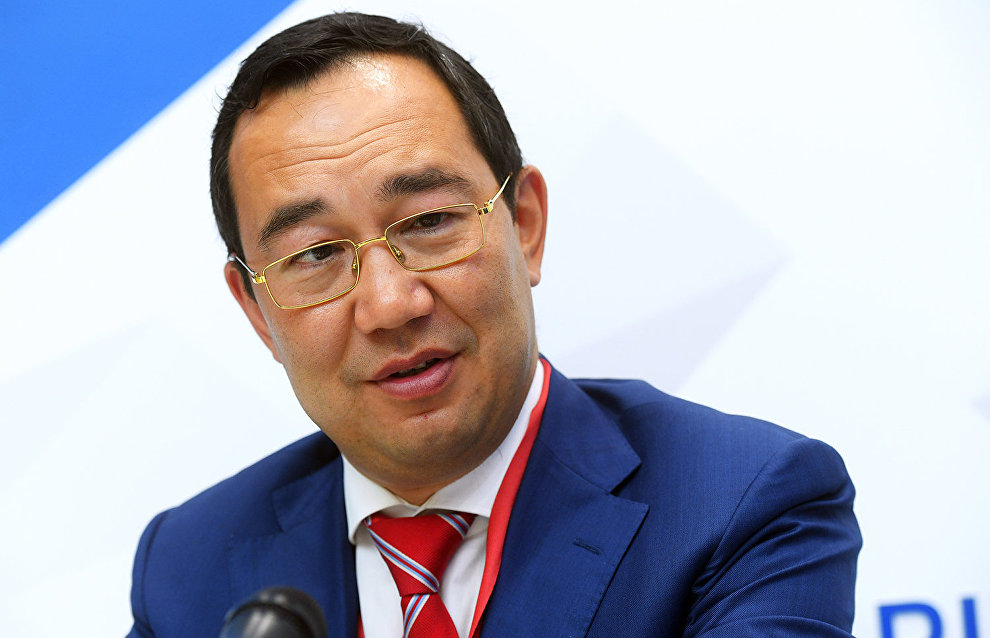 Nikolayev: Poor transport connectivity needs to be addressed to move to a new level of Arctic development

Head of Yakutia Aisen Nikolayev attended the plenary meeting of the Second International Northern Sustainable Development Forum, which is entitled Transport Infrastructure in the North and the Arctic.

He said that Yakutia, Russia's largest region in area, occupies the largest part of the Russian Arctic and has unique transport potential. Owing to its geographical location, Yakutia can become a bridge to connect different corners of the world in terms of circumpolar transport.

"Today, the northern Arctic areas with their huge economic potential are becoming a bridgehead for the development of many countries," Nikolayev said. "The State Arctic Development Program priorities, which Russian President Vladimir Putin approved last March, include efforts to preserve the Arctic as a territory of peace, mutually beneficial partnership and a strategic resource base in order to boost economic growth and improve the well-being of the people. These priorities are in line with the 17 Sustainable Development Goals, including the fundamental goal to create reliable infrastructure and facilitate comprehensive and sustainable industrialization."

He added that the pandemic has resulted in the regional government's ability to appreciate the value of communications and the importance of transport links in a new light.

"Today, investment in infrastructure, transport, energy supply and information and communications systems is needed to ensure sustainable economic development for the well-being of the people," Nikolayev said.

According to Nikolayev, a low population density is typical not only of Yakutia's Arctic area but other northern areas in the world as well. "A mere 68,000 people live on a vast territory of 1.6 million square kilometers," he said. "Settlements in one administrative district in the north are sometimes hundreds or even thousands of kilometers apart and they have no reliable transport links between them."

Nikolayev believes that to move to a new level of Arctic development, there is a common task that forum participants need to address, which is finding a solution to the centuries-old problem of poor transport connectivity.

"The search for the best solutions should include an exchange of experience and the implementation of joint projects to guarantee success in resolving the issues of spatial development in circumpolar areas," Nikolayev said.

In addition, the head of Yakutia talked about the region's achievements and said that thanks to the policy of priority development of the Far East and Russia's new Arctic agenda, recent years had seen significant changes in the approach to the issues of insufficient infrastructure in Yakutia. Work is in progress to build the high-tech Zhatai shipyard in Yakutia under the national transport development project while regional authorities have secured support from the federal government for their efforts to enhance aviation connections in the north, so airports are being renovated and new aircraft fleet projects are in the pipeline.

Aisen Nikolayev said the construction of the Lensky Bridge had been included on the National Program for the Socioeconomic Development of the Far East, which was approved by the Russian government and signed by Prime Minister Mikhail Mishustin.

"A bridge across one of world's greatest rivers [the Lena River] will connect the vast areas of eastern Siberia and the Far East, which account for over one-quarter of the country's entire territory," Nikolayev said.

Speakers at the plenary meeting also agreed that transport, as one of the key factors in the development of the northern areas and the Arctic, had an important social function, which is to ensure mobility and improve the quality of life of the local population.

Experts discussed in detail the development of air, rail, sea and motor transport in the northern and Arctic areas in the country and elsewhere, touching on the impact that global warming and climate change are having on the development of transport systems in the north and the Arctic. Proposals by the event participants will be included in the final resolution of the Second International Northern Sustainable Development Forum for further deliberation, while the resolution will be forwarded to the Northern Forum, an international organization.