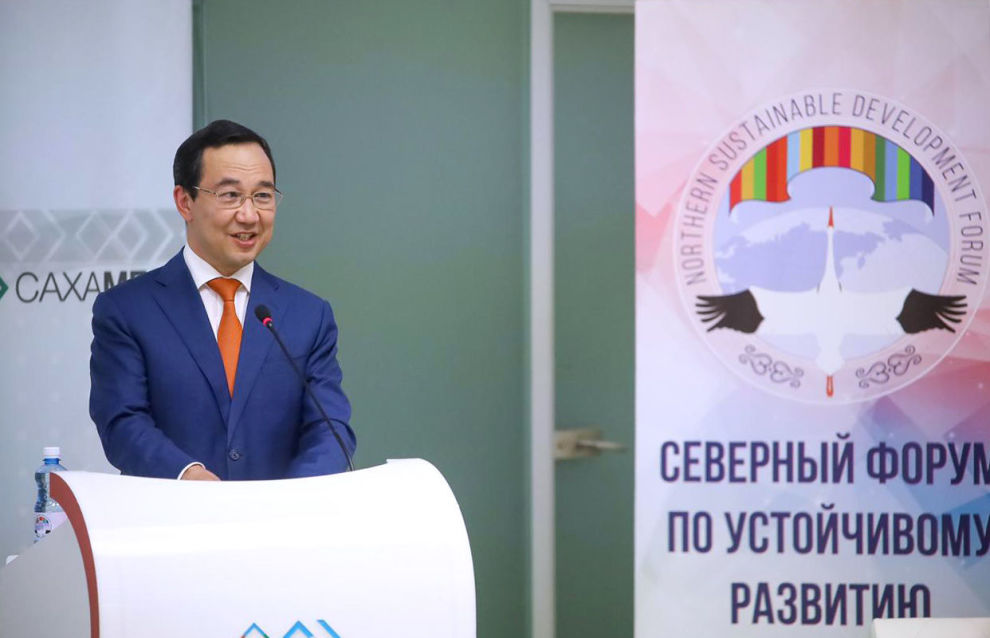 The fourth meeting of the Lena Club took place on September 30 as part of the second international Northern Sustainable Development Forum. The expert online venue, established at the initiative of the Head of the Republic of Sakha (Yakutia) Aisen Nikolayev, was devoted to the prospects for region-to-region cooperation in the development of the north and the Arctic. The event was attended by governors and representatives of Arctic regions, and relevant government bodies and the expert community.

In his speech Aisen Nikolayev noted a number of key areas in which regional partnerships could produce tangible results. These include the restoration of light aviation of the north, the creation of a system for the comprehensive monitoring of permafrost areas and legal regulations for ivory fossil procurement.

“As much as 100 tons worth of mammoth tusks are taken from our region every year. About a third of it is illegal. We have been working for many years for the adoption of a relevant federal law because our attempts to regulate this market through various acts of delegated legislation are not producing the desired result. I believe we, the Arctic regions, must vigorously promote our position through a concerted effort,” said Nikolayev.

He added that Yakutia is the only Russian region to have adopted a law on protecting the permafrost. Meanwhile, the structural stability of buildings and other structures on this surface requires continuous monitoring and this must be fixed in federal law.

The proposals were supported by Deputy Minister for the Development of the Russian Far East and Arctic Alexander Krutikov. He expressed the willingness of the ministry to support the adoption of a federal law on protecting mammoth remains and raise the level of permafrost control to national status.

“It is worth expanding this issue and speaking in general about the task of adapting the Arctic territories to climate change. I support the idea of monitoring permafrost. We have already started this work and will create, by the end of the year, a system to determine the parameters of legal regulation in this area,” the Deputy Minister said.

In addition, Alexander Krutikov emphasized the importance of developing Arctic cooperation not only between the northern regions of Russia but also internationally. Such cooperation would open new opportunities for trade and export. He said the ministry intends to propose to circumpolar countries a new program for encouraging cross-border cooperation, including among indigenous minorities, during Russia’s Chairmanship of the Arctic Council.

During the event, the participants spoke about the need to protect the interests of the indigenous minorities, restore light aviation, take measures against wildfires, natural and man-made disasters, develop northern tourism, cooperate on a regional basis in training needed personnel, create a modern system for encouraging people to work in the Arctic and upgrade the economic and logistics systems of the Northern Sea Route.

This is not the first time that Yakutia, a region that accounts for almost a third of Russian Arctic area, has initiated a dialogue on the development of the Arctic. The head of the region Aisen Nikolayev lays special emphasis on the issues of socio-economic and environmental wellbeing of these territories and protection of the lifestyle of their indigenous peoples. To reach these goals, the republic has adopted a strategy for the socio-economic development of the Arctic zone of the Republic of Sakha (Yakutia) up to 2030. It implements a number of innovative initiatives regarding the restoration of traditional crafts, expansion of the telecommunications infrastructure and the accessibility of medical, education and cultural services.

Speaking at the event were also Kamchatka Territory Governor Vladimir Solodov, Vice-Governor of St. Petersburg Eduard Batanov, Deputy Chairman of the Krasnoyarsk Territory Government Anatoly Tsykalov and Director of Rosatom’s Department on Cooperation with the Regions Andrei Polosov. The meeting was attended by General Director of the VCIOM Foundation Konstantin Abramov, the General Director of the Project Office for the Development of the Arctic (PORA) Alexander Stotsky, Rector of the Ammosov North-Eastern Federal University (NEFU) Anatoly Nikolayev and representatives of the interested departments of the Murmansk Region, the Komi Republic, the Nenets Autonomous Area, the Republic of Karelia and the Arkhangelsk Region.