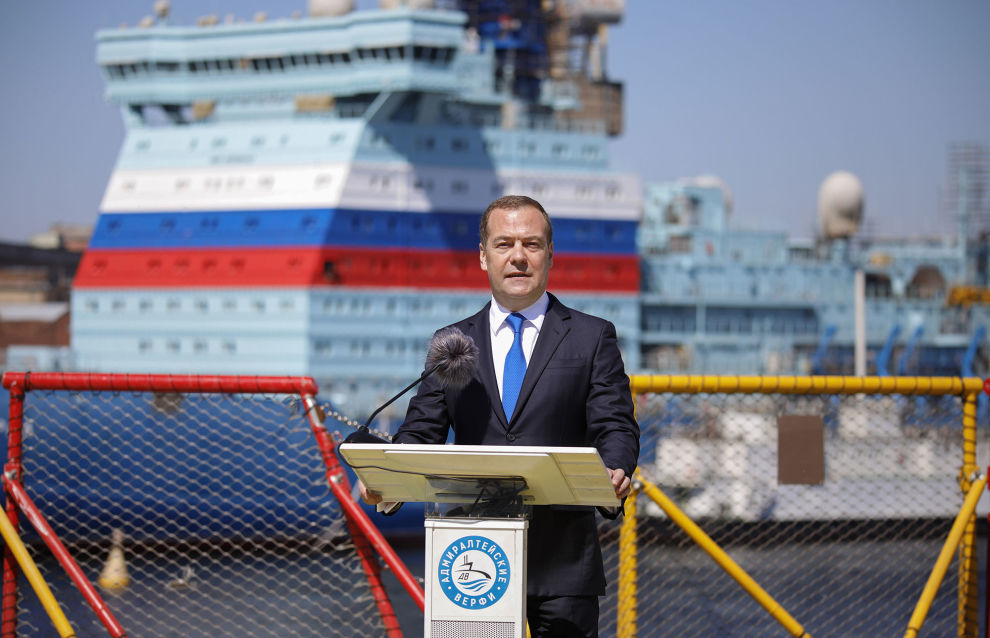 The North Pole, a new ice-resistant, self-propelled ship/platform, is completing a trial cycle and will soon be carrying out its mission to help develop the Arctic zone.

“The North Pole platform is completing its trial cycle and is preparing to set out for its maiden voyage in the high latitudes” said Dmitry Medvedev, Deputy Chair of the Russian Security Council during his visit to the Admiralty Shipyard in St. Petersburg to see the ship. “This expedition is particularly important for our country. The platform will be used to perform major jobs to promote the socioeconomic development of our Arctic zone. We recently looked into this issue at a special Security Council meeting. The sailing of the platform at sea shows yet again that nobody can obstruct, restrict or “freeze” our activities in the Arctic no matter how badly our adversaries want it.”

The creation of a ship like this allows Russia to resume the practice of organizing the 12-month long, year-round North Pole drifting expeditions that were suspended in the early 2000s.

This ice-resistant and self-propelled platform has a landing pad for helicopters and can operate without the assistance of an icebreaker. The displacement of the North Pole, a unique platform of this kind, exceeds 10,000 metric tons. The station is designed to remain self-sufficient in food for up to 12 months and in fuel for up to two years. The platform is equipped with an onboard research complex consisting of 16 laboratories and a mobile field camp that can be set up on ice floes. The North Pole station staff comprises 34 researchers.

The Federal Service for Hydrometeorology and Environmental Monitoring (Roshydromet) and the Admiralty Shipyard signed a contract for the construction of this platform in the spring of 2018, and it was laid down on April 10, 2019. Russian President Vladimir Putin asked the Government to ensure that the construction of the platform was completed, that all tests were carried out and that the North Pole ice-resistant, self-propelled platform was commissioned in 2022.

Last May, the ship’s sea trials were carried out in the Gulf of Finland. The platform is expected to begin flying its flag in St. Petersburg in July and then it will set out for Murmansk on its first expedition, the beginning of which is scheduled for September this year. The first phase of the expedition will last about six months through February or March, during which specialists will be adjusting and testing the platform’s systems. The second phase is expected to run longer.