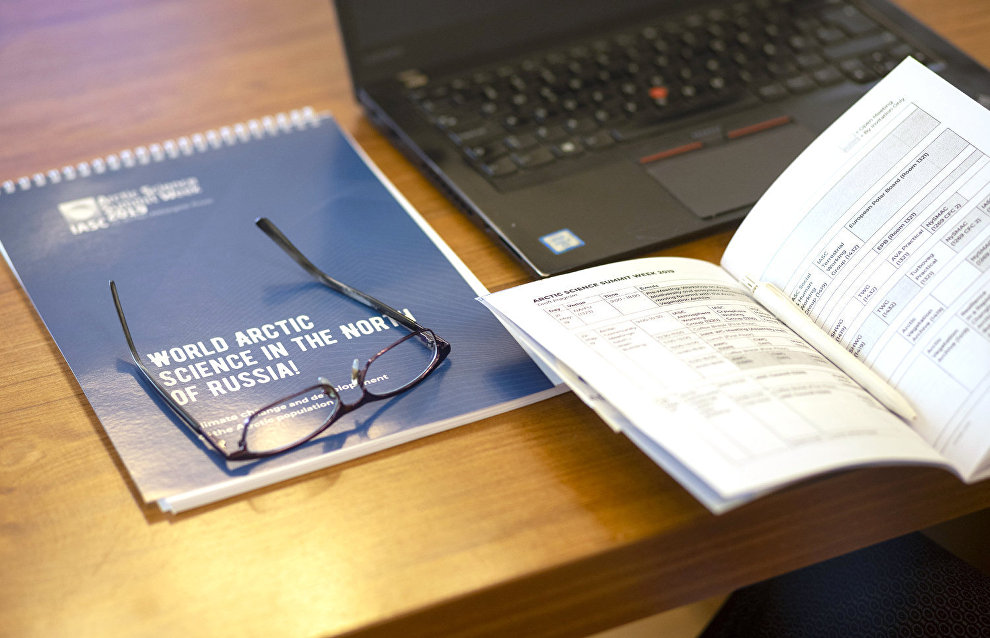 The days before the summit, due to open on May 24, are usually reserved for discussing IASC's current and long-term projects and addressing organizational matters.

Members of IASC's Atmosphere Working Group are working on the Year of Polar Prediction project, the main events of which take place in the Arctic and Antarctica. The project was officially launched by the World Meteorological Organization (WMO) in 2017 in Geneva, Switzerland.

The project aims to improve weather forecasts and the environment in polar regions, said Carlos Toledano, a member of IASC's Atmosphere Working Group. During its work, the group conducts many more measurements to obtain the most accurate data possible, he said. The working group also wants to start measuring lunar radiation levels affecting the Arctic surface and to obtain such data during polar nights and in the winter, he added.

In January 2019, Helsinki, Finland, hosted a working meeting on Arctic science, with researchers discussing data obtained during the first two special measurement periods under the Year of Polar Prediction project.

Unexpected stratospheric warming during the winter-time Arctic special observation period (February-March 2018) took place on the eve of discovering a rare ice-hole north of Greenland. While abnormally warm weather prevailed over the Labrador Peninsula region, as well as over the waters of the Beaufort Sea and Bering Strait in northern Russia, the "miracle from the East," or the so-called Finnish environment with extremely low temperatures and heavy snowfalls, engulfed large European regions, IASC experts said. It may be interesting, but an ice-hole reopened north of Greenland during the summer-time observation period (July-September 2018), due to other abnormally warm southern winds.

Scientists also shared data on the biological and chemical composition of deep-sea sections.

Researchers are closely watching the dwindling sea-ice formations in the Arctic Ocean and trying to evaluate this process' influence on the Arctic's environmental systems, Lee Cooper (Ph.D. in Oceanography), a research professor at the University of Maryland Center for Environmental Science (Washington, DC), noted.

Obviously, Arctic sea-ice formations are shrinking and thus increasing the amount of fresh water in the world's oceans, the scientist noted. This affects marine mammals and serves to change the temperature regime, he said.

According to Cooper, this compels some animal species whose habitat is linked one way or another with ice formations to migrate actively. This concerns walruses that spend a lot of time on ice formations, relaxing after scouring the seabed for food. They have to swim more and to adapt to new conditions; but they are not used to swimming for long time periods.

There are fish species that migrate here from southern seas and that have never been spotted here before, Lee Cooper said. At the same time, some Arctic animals might disappear in the near future after failing to adapt to new conditions, he added.

Members of the academic community have little doubt that anthropogenic activity, including greater carbon monoxide/dioxide content in the atmosphere, is one of the main causes of climate change. Its current atmospheric content has hit an all-time high during the recorded history of scientific observations. Industrial companies, the transport sector, the incineration of casing-head gas at oil and gas deposits, etc., affect the carbon dioxide balance in the atmosphere and seawater.

"We mostly work off the Alaska coast and along the border with Russia," Cooper noted. "We are interested in systematic measurements of the state of seawater. We are also interested in the state of waters in the Russian zone because the sphere of our interests has been spreading all over the entire Arctic Ocean as of late. We would be happy to work in Russian waters accounting for a tremendous share of the Arctic Ocean, but this is impossible because of certain restrictions. For many years, Russian scientists have been conducting systematic measurements in those Arctic areas where we were able to work only rarely. The holding of the summit in Russia is an excellent opportunity to exchange experience, to compare research results and to discuss possible cooperation options," he added.