Svetlana Usenuyk, postdoctoral researcher at the Institute of History and Archaeology, Ural Branch of Russian Academy of Sciences, made a presentation at the webinar on today’s realities for northern nomadic hunters and reindeer herders.

During the webinar, Svetlana Yusenyuk made a presentation and answered questions from the audience.

You said that the narta is very sturdy. Do you think the modern means of transportation you mentioned (cross-country vehicles, quadricycles) will someday replace the traditional narta completely? Or will it survive as an element of the traditional lifestyle?

It is an excellent question, thank you! This is what we as designers have been racking our brains about since we came across these traditional northern technologies. As for them being replaced, I can say that at the moment it is impossible, because the latest transport vehicles are designed a long way from where they are used. Another problem is that the vehicles are designed as a complete object, leaving little or no room for its adaptation by people. As I mentioned, the narta is very sturdy, but it can break, of course, under pressure, because it is made of wood. But the wonderful thing about it is that it can be repaired along the way, in the field, whatever extreme situation you might find yourself in. With very simple tools and materials on hand, its functions can be restored. And this unique quality is something that modern technology cannot rival. If some day such quick-fix technologies in field conditions become available, then of course we can talk about replacement.

As far as I understand, the narta is part of the traditional culture, part of a lifestyle. Do you think the potential replacement of the narta with modern means of transport could result in the loss of part of that culture?

If I were an anthropologist or ethnographer, I would probably talk about means of preserving the cultural heritage,  its conservation. But as a designer, I'm rather in favor of functionality. If something else comes up and it is not only functional… We look at some psychological aspects of people's interaction with this form of transport, because the narta is far more than just transport. A person, for example a Nenets herder, spends half of his life in it. He sleeps in it, eats in it, uses it as a work desk and as a storage place. If some other unique modern means of transportation is invented, and it can perform all these functions, and reindeer breeders can find a way to use it in the same way as they are using the narta, then of course I'd say yes…

But as for new means of transportation, new equipment and technologies that come to the Arctic, we, designers, can say that we design things for people who will also come to the Arctic from the outside. We consider the material world of indigenous nomads as ideal, and for us, of course, the narta, the skin hut, their clothes and the deerskin parka, are already an ideal designer model. Therefore, it would be too daring to talk about complete replacement or to say that we, outsiders, can design something that would be a good substitute for their ideal things that have been perfected over thousands of years. I wouldn't dare take on such a responsibility. In principle, these people are not our target audience. We work for people who come to the Arctic for exploration, and our job is to show them how to do so carefully, and in a way that is safe for the environment, i.e. how to live like the indigenous northerners and treat this place with the same responsibility and respect.

Various Arctic regions host narta and reindeer sleigh races. You mentioned in your presentation that the narta can cover a distance of 250 km per day, which is an impressive amount. What is the top speed the narta can develop in the tundra?

I can tell you what I learned from my sources: up to 40 km/h. But it largely depends on the landscape. If you compare the tundra in Yamal and Chukotka, for example, the Chukotka tundra is stony and contains lots of obstacles, it is very aggressive to any type of transport, and certainly it would be impossible to travel at this speed there. However, the Yamal tundra is soft and requires a rigid narta, and then this speed becomes possible. Diversions of this kind are widespread during the Reindeer Breeder's Day celebrations. But again, a lot depends on the land surface.

What is the difference between the narta of the Kola Peninsula, Chukotka and Yamal? Is there any fundamental difference?

The Yamal and Chukotka nartas are fundamentally different. As for the Kola nartas, the Komi-Izhemtsy borrowed them from them the Nentsy and took them to the Kola Peninsula. So what we see now on the peninsula is just a modernized version of the Nentsynartas.

It is slightly more variable, it is sometimes made less carefully. Reindeer breeders say Nentsynartas for them are ideal, while Kola ones are more carelessly assembled. But on the whole, they are designed in the same way.

The Chukotka narta, however, is fundamentally different from the Nentsynarta because it has a unique design: it consists entirely of knots, little pieces of structural elements. Firstly, this is due to the lack of large amounts of wood in Chukotka, where long wood pieces are impossible to find to make, for example, the runners or the top of the narta, which is why nomads in Chukotka assemble their nartas from everything they can find and connect parts with pieces of plastic, ropes, wires, whatever is available.

Another special feature of the Chukotka narta is that it is very lightweight and can be carried by one person. They even have a joke, about whether it is true that Nentsy carry nartas in pairs, as it seems absurd to them. Heavy transport is completely inefficient for them in their landscape and for their movement patterns.

The Nentsy have a different situation. For them, narta-making is like high art, they attach great importance to it. They pay attention to the beauty of the lines and the handling technology. I have seen with my own eyes how they experiment with such seemingly traditional things as the bending of runners, which is done in the strictly traditional way of twisting the head part of the runners over steam with wet cloths. Today, sometimes people soak wood in petrol or kerosene, which kills parasites living in the wood and softens the wood very quickly, unlike steam, which takes longer. So they do leave room for experimentation, which indicates that the Nentsy take their nartas very seriously.

What else can I say about the differences? Naturally, the Nentsy narta has a very sturdy structure for moving on the soft Yamal soil, while the Chukotka narta has a softer, more flexible structure to travel on the tough terrain of the peninsula. This is the main difference.

We have a note saying that the Saami used to ride keryozhi on the water like a boat. Have you studied this?

Yes, it was a very interesting means of transportation in the history of Arctic mobility. These are single-runner sleighs, with a wide runner in the middle, while the rest of the vehicle, the closed part, was like a boat. Interestingly, it slides very smoothly on spongy snow. Hence, it is ideal for this type of weather, it slides very fast. Then the narta revolution overtook the Kola Peninsula, when nartas were brought in by the Komi-Izhemtsy and virtually pushed out the keryozhi. It happened very quickly, within a decade. Why did this happen? Because the Nentsynarta turned out to be far more practically efficient for work; it was easier to handle during reindeer herding. Keryozhi were not used by herders, they were used as caravan transport for moving people and cargo. They were normally pulled by one reindeer, so they couldn't develop a high speed or carry big loads. So it wasn't a very efficient form of transport for large-scale reindeer herding and was soon replaced with the more practical narta. 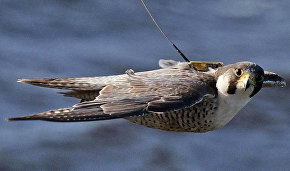