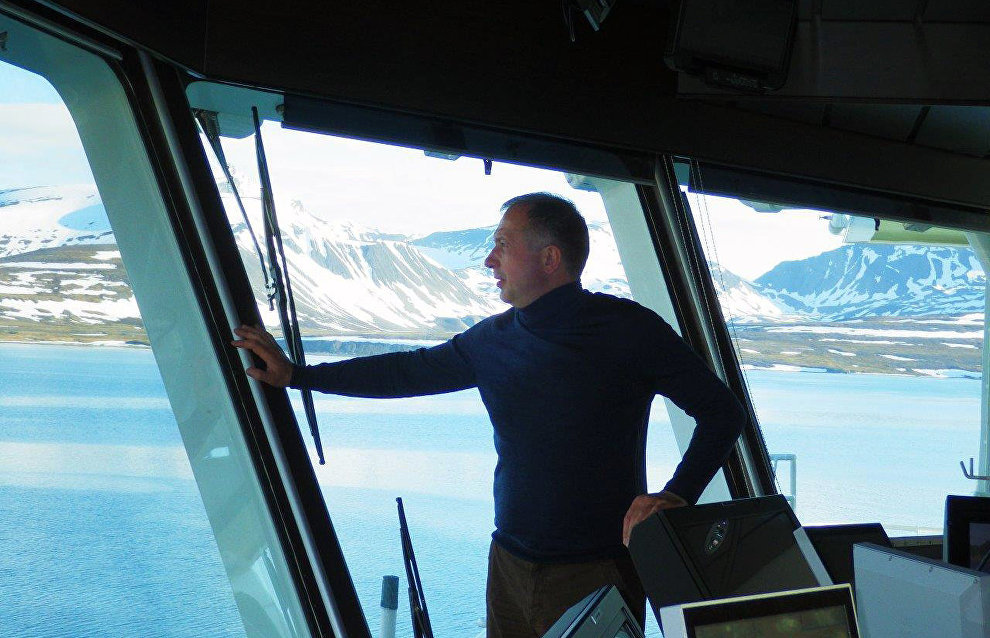 Alexander Veselov: In 2018 tourism on Spitsbergen will bring more money than coal mining

As an 85-year-old coal company, how do you plan to create a tourism boom on Spitsbergen Archipelago (Svalbard)? How many miners are required for the maintenance of a modern mine? Does Norway plan to leave the archipelago? General Director of the Arktikugol State Trust Alexander Veselov answers these questions.

Mr.Veselov, what could you say about the Arktikugol State Trust?

The company was established for coal mining on Spitsbergen in 1931. It will be 85 year old next year. Today it mines 120,000 metric tons of coal a year. In the past few years it has been diversifying its activities by developing science (it is establishing a Russian research center on Spitsbergen) and tourism.

How do you plan to develop tourism?

We are already actively working in this area. Last April our company established a new structural unit. Now apart from the Barentsburg mine we have Grumant, a center of Arctic tourism. We have set a goal for ourselves — by 2018 we should receive more money from tourism than from coal mining.

But you are still a coal mining company rather than a tour operator?

But this is still our goal nonetheless. Since 2008 we have been building tourist facilities on Svalbard, mostly on federal subsidies. In 2007 proceeds from tourism amounted to 6 million rubles, whereas last year we received 39 million. I think that this year these proceeds will increase by 75 percent to reach some 70 million rubles, although we planned to receive 60 million.

Tourists from which countries purchase your tours most often?

We are generally oriented toward tourists from Russia. Next year we'll organize the first charter flight for them. It is important for them to know that according to the 1920 Paris Treaty individuals may visit Svalbard without a visa although it belongs to Norway. Right now the situation is like this — a tourist on a regular flight should first go to Oslo and only then to the archipelago and back. Tourists need a multiple-entry Schengen visa for this. But if they fly on a direct charter flight from Moscow, they only need a foreign passport. This is an important detail.

In 2014 we received a tour operator license and we are organizing Russian tourist groups. Last year we had seven groups with a total of 100 people and this year we have many more. The ruble's weakening is one reason for higher proceeds, but the growth in the number of tourists is more important.

What can you offer them?

We have modern sleeping accommodation of a different class for about 300 tourists. This year we opened a new hotel — Pomor, which is rather affordable. We have a hostel for students with bunk-beds.

How much do your tours cost?

The costs are very different. We have various tours for different prices, durations and program intensity. If a tourist flies here himself, the tour will cost him 50,000 rubles and up. Next year we'll organize tours on a Norwegian ship built in 1961. It was repaired and made very comfortable. Tours aboard this ship will cost 3,000 to 4,000 euros, including air tickets.

Could you tell us about the main business of your company - coal mining?

The treaty allows its signatories — both companies and individuals from these countries — to engage in four basic types of activities on Spitsbergen — mining raw materials, industry, navigation and commerce. Coal mining is now the main type of activity on Spitsbergen and allows our company to engage in economic activities on the archipelago. Now coal reserves in the Barentsburg deposit are limited and the annual coal mining is limited, too, it's only 120,000 metric tons. This is not enough, but we cannot increase coal output before a decision on building a new mine is made.

In cooperation with the Energy Ministry, we calculated how much coal we should produce so as not to be in minus. We must produce about 350,000 metric tons of coal per year for this purpose and this is not so much. Considering that we mine less coal today, the state provides us with subsidies. These subsidies are reduced all the time because we are trying to reduce our expenses and the budget potentialities are limited. These subsidies decreased by 40 percent since 2009.

Probably, you will be able to increase your revenues by developing tourism?

This is our task, but the situation is more complicated. A decision on building a new mine must be made in 2017-2018. The current reserves make it possible to mine coal at the Barentsburg deposit up to 2030, but because of 120,000 metric tons per year limitations imposed on our coal production for the time being, we are working at a loss.

How many mines does your trust have?

Before 1961 we had three pits and afterwards we had two — Barentsburg and Pyramida. In 1998 the Pyramida mine was shut down due to the economic crisis because the deposit's reserves were rather small.

In Soviet times, about 3, 100 people worked in two pits. Now, only 400 people work on Spitsbergen year round. Some go on vacation from time to time — by law people receive the right to vacation after a year of work and in two years they are obliged to leave on vacation. During the summer, we do repairs and we invite about 50 seasonal workers to do the job.

What does your trust do for environmental protection?

Spitsbergen (Svalbard) is the best-protected natural zone in the world. It is truly unique — it is close to the North Pole but has a relatively mild climate due to Gulfstream. Local nature is vulnerable and Norway is investing enormous funds to protect and preserve it.

Before 2008 our trust was heavily criticized, but we started an active dialogue with the Norwegian authorities and settled all outstanding questions. Now we have complete mutual understanding with them. The main grievances concerned our thermal power station due to large amounts of dust but we have replaced all of the equipment in accordance with international standards.

We measure emissions and submit reports twice a year. Now we have eliminated most of the damage that occurred over the last 30 years of geological prospecting.

This year we put into service a shop on household waste disposal. We don't know yet if we'll be able to sell recyclable materials but we resolved the task of processing them. There are no grievances for the time being regarding our activities and we hope that there will not be any in the future.

Under the 1920 treaty on Svalbard, 42 countries have the right to work on Spitsbergen. How many countries are there now?

Norway and Russia. Over the past eight years the Norwegian company Store Norske was engaged in loss-free coal mining but now it is gone. They decided to mothball their pit until 2018. So it is unclear if they will work there.

Can Russia remain alone on Spitsbergen?

No, Norway will engage in economic activities in any event. Norwegians have large research and educational programs and are developing tourism in a big way. We are actively cooperating with them in tourism and understand each other fully in this area.