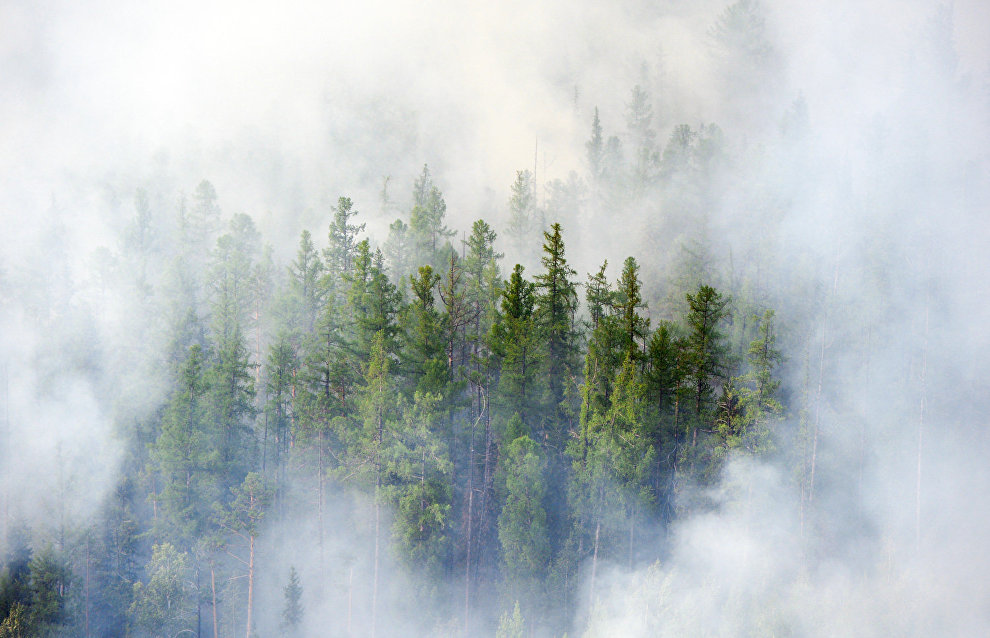 Arctic obscuration (or haze) is an optical effect observed in the northern latitudes. It is produced by different aerosol pollutants — both industrial emissions and natural factors. Scientists believe this effect has been strong since the mid-20th century when postwar industrial production recovered all around the world.

This hazy air is a pollutant in the atmosphere and disrupts one more important process in subarctic ecosystems – the photosynthesis of trees, thereby hampering their growth. This was reported by Vladimir Shishov, one of the authors of a study on the influence of industrial emissions on subarctic forest ecosystems. Shishov is head of the faculty of Mathematic Methods and IT at Siberian Federal University (SFU).

The obscuration effect has reduced the amount of solar radiation on the Earth’s surface. This trend has been observed in forests over a vast territory — from the Ob River estuary (Western Siberia) to the Khatanga River (Taymyr Peninsula). Mathematical modeling of tree growth that takes the obscuration effect into account conducted by scientists showed a very high correlation between these two natural phenomena.

“We tried to connect the reduction of incoming solar energy with the tree growth using the Russian Vaganov-Shashkin model, which is one of the most quoted in this area in the world scientific community. We modified our model to show that including the obscuration effect considerably improves the modeling of tree growth, making evaluations very accurate,” said the scientist.

To reveal the reasons for the emergence of the haze over the Arctic, Russian experts contacted their foreign colleagues that study the physics of the atmosphere. Evidently, aerosols appeared over subarctic forests for several reasons.

“First, this is caused by natural phenomena. The atmosphere may be obscured by large volcanic eruptions or strong wildfires. Second, the anthropogenic factor or the world’s vigorous industrial activities play a major role as well,” Shishov said.

Alexander Kirdyanov, senior research associate at the FSU laboratory of ecosystem biogeochemistry and an associate at the Sukachyov Forest Institute of the RAS Siberian Branch, noted that the fog over boreal forests is not permanent.  “If you look at the maps that show observations of sulphur dioxide emissions, you can see that there are very few companies in the Arctic that pollute the atmosphere. The bulk of such companies are located in Southeast Asia with contributions from North America and Europe,” he explained. It is their industrial activities that produce the Arctic aerosol haze based on the specific air circulation patterns in the Northern Hemisphere.

“The air masses in the upper layers of the atmosphere can blow at speeds of up to 300 km per hour. These aerosols can rise fairly high and move from the equator to the North Pole in a fairly short span of time,” Shishov said.

According to scientists, the slowing of taiga forest tree growth runs contrary to expectations, given the recorded warming all over the world, and particularly in the Arctic. Northern trees are very sensitive to air temperature, and normally higher temperatures should facilitate tree growth, thereby enhancing the productivity of subarctic forests. But the Arctic haze alters the picture. This new variable must be considered in forecasting the tree growth under the impact of global warming.

“In the past 2000 years, most high resolution reconstructions of temperature change are based on indirect sources of information, primarily the parameters of the annual rings of the trees that are most susceptible to temperature, especially in the northern areas. Such reconstructions are the basis for forecasting temperature dynamics in the future,” Alexander Kirdyanov explained.

“The identified discrepancies between temperature increase and tree growth call into question the accuracy of reconstruction models and temperature forecasts based on annual tree ring studies. Our research offers a solution to this problem,” he said.

Let’s recall that the influence of aerosols on trees often kills them. Since the 1970s, boreal forests have died on about 24,000 square meters in the Arctic. According to scientists, by the early 2000s, the growth rate of trees in boreal forests is half of what it was in the 1960s. Aerosol pollution in the northern latitudes can be eliminated only by the concerted effort of all countries that produce air emissions.

“Only the international community working together can save the Arctic from the phenomenon that is described in our article. It could draft a solution that would make it possible to considerably reduce the load on Arctic and subarctic ecosystems,” Shishov summed up.

This study was conducted with a grant from the Russian Science Foundation. The results of the study are published in the journal, Ecology Letters.