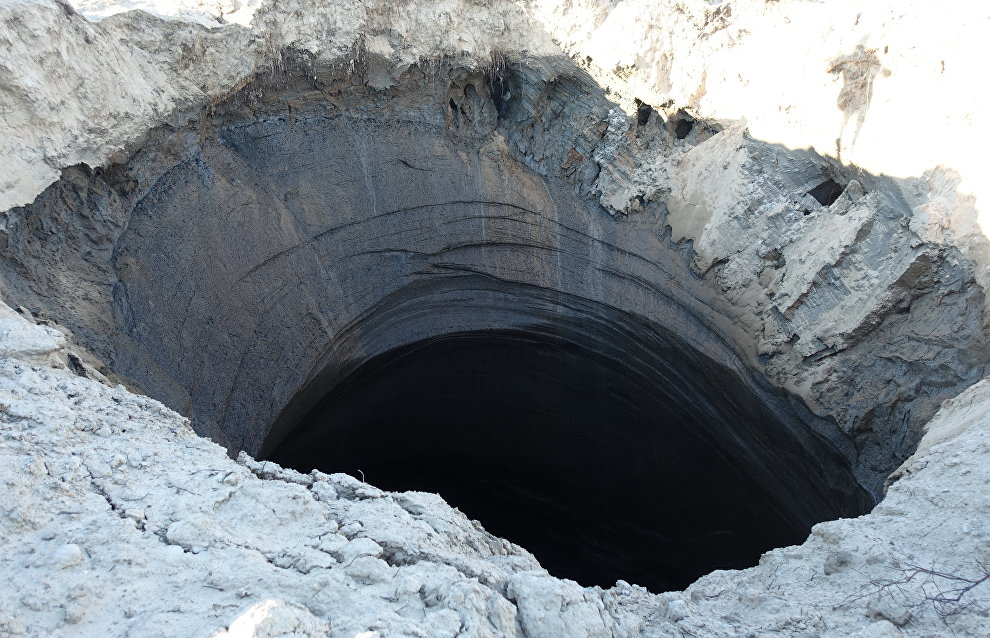 Researchers study the emergence of a crater in the permafrost

The permafrost zone that occupies about two thirds of Russian territory is a huge underground methane storage tank. During these times of global warming in the Arctic and the gradual degradation of the permafrost, researchers are concerned about the threat of high greenhouse gas emissions that could result in an even warmer climate.

Methane can seep gradually from cryogen depths in small amounts, but it can also spill into the air as a powerful emission. This is how the well-documented, 40-meter wide Yamal Crater, which is 42 km from the Bovanenkovo gas deposit, could have been formed. However, the scientific community does not yet agree on the origin of this phenomenon.

"Arctic craters is a relatively rare phenomenon that mostly occur in difficult-to-access, remote tundra. The heaving ground that precedes the formation of a crater by a gas emission usually happens relatively quickly, over one to two years, and this sudden growth is hard to observe, so almost all craters have been discovered after being formed. We have only piecemeal evidence from locals who say they heard a noise or saw smoke or flames. Plus, a crater can turn into a lake within one to two years, which is difficult to distinguish from common thermocarstic lake in the Arctic tundra," says Evgeny Chuvilin, leading associate of the Skoltech Center for Hydrocarbon Recovery. He heads a team of researchers studying these craters.

The gas emission created crater was discovered by accident in the flood basin of the Yerkutayaha River on the Yamal Peninsula in 2017 by a team of biologists that were studying falcon nesting in the region. The crater was 20 meters deep and had the same width at the time of its discovery.

According to Dr Chuvilin, the Skoltech team was lucky to get to the much less famous Erkuta crater during its first year — and just one year before it turned into a lake because next year it was already full of water. Thus, they are probably the only team in the world who got to look into the origins of the Erkuta crater. The researchers took samples of permafrost soil, ground ice and water from the rim of the crater during a field trip to Yamal in December 2017 and conducted drone observations six months later.

Based on these observations, the scientists built a model for the formation of the Yerkuta crater, which emerged in a dried-up lake within the limits of the former paleo-channel of the Yerkutayaha River. This lake probably had an underlake talik — a zone of unfrozen gas-intensive soil that started freezing gradually on all sides after the lake had dried out. It was building up the pressure inside the soil, which was ultimately released in a powerful explosion. This model describes the possible processes of the formation of such craters and could be used in geo-cryology and climate change studies.

"Cryovolcanism, as some researchers call it, is a very poorly studied and described process in the cryosphere, an explosion in rocks, ice, water and gases that leaves behind a crater. It is a potential threat to human activity in the Arctic, and we need to thoroughly study how gases, especially methane, are accumulated in the top layers of the permafrost and which conditions can cause the situation to become extreme. These methane emissions also contribute to the rising concentrations of greenhouse gases in the atmosphere, and climate change itself might be a factor in increasing cryovolcanism. But this is still something that needs to be researched," Chuvilin notes.

"The formation of a crater by a gas emission in the permafrost is a poorly studied geological process that has rarely been described before. It represents an explosion in a mixture of rocks, ice, water and gases. Some researchers call it cryovolcanism. The formation of large craters could pose a threat to human activity in the Arctic. In this context, researchers need to forecast how they form by studying the sources of gases, primarily methane, the mechanisms of accumulation in the top layers of the permafrost, and the conditions that trigger explosive gas emissions. These emissions may contribute to the rising concentrations of greenhouse gases in the atmosphere, and climate change itself might be a factor in increasing cryovolcanism. However, researchers must still study this interconnection and mutual influence," Chuvilin said.

This study was conducted with the participation of the French energy company Total, the Department on Science and Innovation of the Yamal-Nenets Autonomous Area and the latter's Research Center for Arctic Studies. The results of the study are published in two articles in the magazine Geosciences.