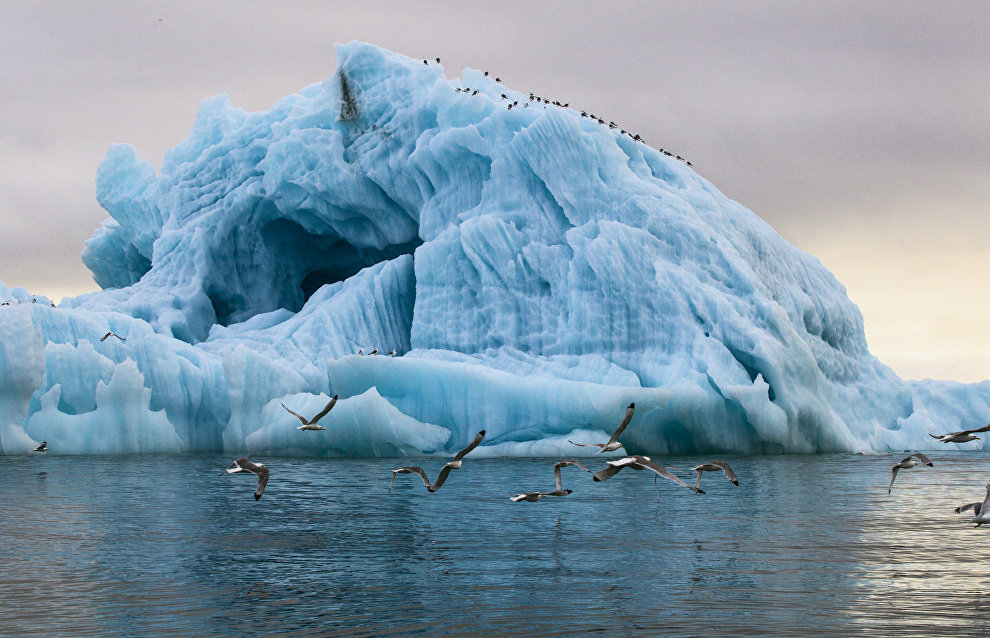 Arctic glaciers are melting fast, and the polar ice cap is decreasing in size every year; navigation along the Northern Sea Route is becoming simpler, and new opportunities are appearing for the development of the Arctic coast. Russia has the longest polar border and a very long history of Arctic discoveries and research. Igor Shumakov, Head of the Federal Service for Hydrometeorology and Environmental Monitoring (Roshydromet), talked to RIA Novosti correspondent Natalya Paramonova about the intensity of ice melting in the Arctic, why Russia needs a network of Arctic stations, how many new islands have been revealed, and why craters can appear on Spitsbergen.

— Have researchers at the Russian Scientific Center on Spitsbergen reported any interesting information?

— The Russian Scientific Center on Spitsbergen (RSCS) is focused on permafrost research. In 2016, researchers from Roshydromet's Arctic and Antarctic Research Institute started creating a permafrost research site near Barentsburg, Russia's first high latitude permafrost site, which is now complete. The range has thermometric wells, a site for monitoring the seasonally thawed layer, wells for monitoring underflow, unfrozen pockets and a set of meteorological equipment. And at the bottom of the fiord, a 150-meter long string with temperature and resistance sensors to monitor the formation of a seasonal submarine cryolithic zone has been installed. Part of the data from the site is fed into the Global Terrestrial Network for Permafrost (GTNP).

Wells and geophysical techniques have been used during annual seasonal expeditions to shine through permafrost, make a 3D model and approach solutions to many crucial questions of Arctic geocryology. Scientists have also worked out a set of geophysical methods for studying permafrost phenomena like hydrolacolithes and cryopegs.

Hydrolacolithes are frost mounds with an ice nucleus, reaching up to 40 meters high on Spitzbergen, and capable of lifting massive rocks to the surface. This phenomenon is not only interesting in itself, but also important in terms of appraising the risks associated with permafrost degradation, considering that the Yamal crater phenomenon resulted from the explosion of such a mound.

The permafrost site on Spitzbergen is becoming a location for the testing of technologies intended to develop the cryolithic zone (area of frozen ground), which will be also required in Russia.

— Has global warming affected the consistency of research or the stability of residential buildings at RSCS?

— The Russian center has not been affected by climate change. We are monitoring the pile foundations of the structures. They are stable so far; there is no risk to them.

— How many new islands have been discovered in the Artic in the past few years?

— The so-called new islands are being revealed by melting glaciers, first of all in the Franz Josef Land archipelago. In some cases, peninsulas covered with ice became islands as glaciers melted. The process is ongoing, and it is difficult to say how many changes we will have to make on the geographical and navigation maps of the North Polar Region.

Some islands appear due to the accretion of drifts in the area of flats. This is how the Yaya Island appeared in the eastern part of the Laptev Sea.

— How have conditions along the Northern Sea Route changed in the past few years? Have there been any major changes?

We also see that ice thickness is decreasing and that perennial ice has all but disappeared in the Arctic seas off Russia. The Northern Sea Route is covered with one-year ice in winter, but the autumn freeze and spring thaw seasons have shifted to October-November and May-June, respectively, especially in the Chukchi Sea.

— How far has the construction of the North Pole ice-resistant self-propelled platform progressed? According to some media reports, there have been problems with it because of the lack of Russian made equipment. What is the current situation? And when will this unique structure be put into operation?

— The platform is more than 45 percent ready. We did have to change the schedule partly in connection with acquiring the basic equipment. The platform will be floated in the next few months, and we will then know the completion date.

— Why do we need a network of Arctic stations? What can they do for the national economy?

— The majority of polar weather stations were established in the 1930s when navigation was planned along the Northern Sea Route. It was one of the biggest strategic objectives in the Soviet Union. Polar stations mostly collected weather, ocean and ice data for making weather, ice and ocean level and wave forecasts. This information was crucial for safe navigation along the Northern Sea Route (NSR). The network of polar stations was greatly expanded in the 1950s to provide the necessary information to the leading weather forecast centers.
Regrettably, the number was slashed in the 1990s, and we can still feel the impact of that, especially in the eastern sector of the Arctic region.

In the past few years, traffic along the Northern Sea Route has increased several times over. The President of Russia has ordered us to increase it to 80 million metric tons by 2024 and to provide year-round navigation on the entire NSR. This ambitious goal calls for a more detailed monitoring of the route.

This is why we are increasing the network of polar stations and organizing comprehensive environmental monitoring, including air and sea pollution, as well as installing modern equipment and software for computerizing data processing.

— What has to be done to increase the safety of navigation along the NSR?

— First, we must restore the system of reference benchmarks along the NSR, in particular, watch stations. As of 2018, we only had 41 ice stations in the polar region, which is not enough.

Next, we will resume monitoring at reference hydrological benchmarks in the estuaries of large northern and Siberian rivers. We will need vessels and modern equipment for this. We believe that it would be expedient to establish new monitoring stations in the economically active regions where weather information is especially important.

— How many automated weather stations do you need for effective monitoring, and when can they be established?

— A promising method for the development of the monitoring system in the Arctic Ocean is the creation and maintenance of a system of autonomous drifting measuring stations. Only such autonomous platforms can promptly provide oceanographic information all year.

There are two methods for receiving information from the long-term anchored buoy stations placed around the Arctic Ocean. The first provides for raising the station to collect the information, and the second method includes the regular transmission of information via satellite channels.

We need 17 buoy stations in Areas 20 and 21, for which Russia is responsible. There are nine buoy stations in the Arctic, which were installed during the TransArctic 2019 marine expedition.

In 2008, the International Maritime Organization approved the boundaries of five navigation and five meteorological areas (areas 17-21) in the Arctic. Canada is responsible for providing navigation safety information in areas 17-18, Norway in area 19, and the zones of Russia's responsibility, 20 and 21, are located in the western and eastern sectors of the Northern Sea Route.

— Is there any new information on the results of the TransArctic 2019 expedition? Do you have plans for a similar expedition?

— The TransArctic 2019 comprehensive expedition was one of Roshydromet's largest scientific projects in decades. The route of the expedition included all seas of the Russian Arctic and the Central Arctic Basin, and included four research vessels, helicopters and drones. The expedition ended in late October 2019. It collected a huge amount of data, which will take time to analyze, and so it would be premature to talk about the outcome. However, the first items based on the collected data have been published in scientific journals. We can make a very important conclusion at this point: the recorded substantial positive water temperature anomalies all the way from the surface down to the bottom, and a reduction in the area and thickness of ice are objective proof of global warming in the Arctic.

Expeditions such as TransArctic 2019 should be held every year for the purposes of comprehensive monitoring of the Russian Arctic environment. However, no decisions have so far been made on this.

— What research stations do we have in the Arctic?

— Several observatories have opened in the Artic at the initiative of Roshydromet. In 2010, we reopened an observation and scientific station in Tiksi. The Tiksi observatory is part of the Arctic Observatory Network acting as a regional station for Global Atmosphere Watch. The station is located in the influence zone of the Atlantic and Pacific oceans, an area of major climate changes. The research program includes meteorology and aerology studies, the monitoring of magnetosphere and ionosphere, and ice and permafrost studies.

In 2013, the Cape Baranov Ice Base opened on Severnaya Zemlya. The year-round program of this stationary research base includes meteorology, aerology, oceanology, ice, magnetosphere, ionosphere, aerosol optical and ozone observation and study. The staff also conducts seasonal observations in the fields of seismology, hydrology, biochemistry, ecology and ornithology.

The Cape Baranov Ice Base is an Arctic observatory equipped for the most complicated high-latitude studies.

The Russian Scientific Center on Spitsbergen, which opened in 2016, comprises 13 research organizations working under a single program. This consortium of research, educational and other organizations from different spheres of activity was established to rally their research capabilities and to coordinate their studies of the Spitsbergen and Arctic Ocean environments. They conduct seasonal field research and hold expeditions to study glaciers and ice sheet dynamics, paleogeography and hydrometeorology, as well as to monitor the level of pollution. The center's chemical lab analyzes the hydrochemical composition of snow, water, air and soil samples, plus plants and sea animals to determine the level of pollution with dangerous components.

The center's satellite receiving and transmission site is responsible for the primary processing of satellite images and information before sending them to the Arctic and Antarctic Research Institute. Orbits converge above Spitsbergen, and so the images taken at the satellite station cover almost the entire area of the Arctic Ocean. The hydrometeorology information is used for the monitoring of ice and weather conditions.

The network of polar observatories will be complete when the North Pole ice-resistant self-propelled platform becomes operational. I have no doubt that its contribution will reinforce Russia's standing in this vital part of the world.