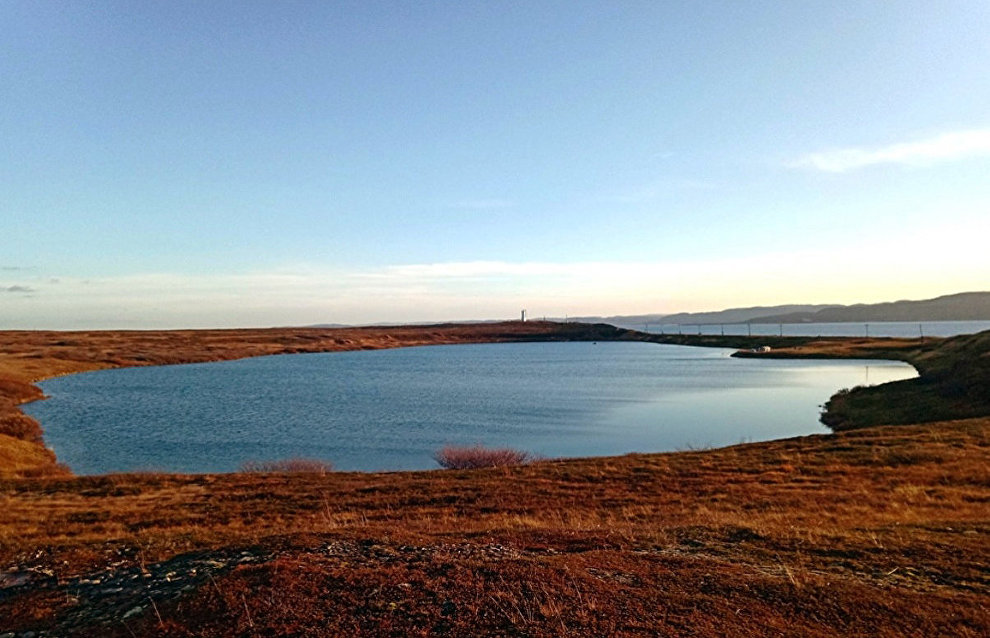 Scientists from St. Petersburg State University have teamed up with their colleagues from Murmansk and Moscow to complete a monitoring survey that assesses the seawater Lake Mogilnoye on Kildin Island in the Barents Sea for the first time in 100 years. Earlier, the lake was known to contain marine and freshwater microorganisms. But the latest research suggests that the lake's freshwater layer has disappeared completely and taken many inhabitants with it. About 90 animal species were recorded there in the early 20th century, and now their number has shrunk almost two-fold.

The small 17-hectare lake which is about 16 meters deep consisted of three layers: including the freshwater surface layer, the intermediate seawater layer and the bottom layer containing the so-called "dead" hydrogen sulfide water with no oxygen. Therefore only certain types of bacteria can survive there. For many years, Lake Mogilnoye was considered to be the only anchialine lake with underground seawater-freshwater exchange patterns. According to experts, powerful high tides squeezed seawater inside the lake via soft ores at a depth of five to eight meters. Although researchers eventually discovered similar lakes in Croatia and Indonesia, Lake Mogilnoye remains the only such lake in the Arctic region.

"If we measure the amount of scientific knowledge about a body of water by the number of pages of scientific publications dealing with it (per one cubic meter of water), then Lake Mogilnoye is, doubtless, the best-studied seawater body in Russia, if not the entire world. But these achievements did not help us predict changes in the lake's eco-system over the past few years," Pyotr Strelkov, Ph. D. (Biology), an assistant professor with St. Petersburg State University, noted.

Although experts have been studying the lake for the past 130 years, scary the alarming changes were not posted until the early 21st century. In 2003-2007, the University's hydro-biologists and zoologists noted that the lake's freshwater layer had diminished. And the 2015-2018 data showed that the process was accelerating: The upper layer has disappeared completely and only reappears during the warm season when the lake is filled with molten water.

"We have witnessed unexpected and alarming changes in the lake," Strelkov explained. "The bottom-level hydrogen sulfide water level has expanded by two meters and filled one-third of the lake's volume. And the upper freshwater layer first thinned and later disappeared completely. Changes in the lake's water layers have influenced the distribution of its biological communities and their composition. Over a period of the past 15 years, everything has changed much quicker than during earlier observations in the past 120 years," he added.

In 2007, the upper layer's salinity levels totaled about three grams of salts per liter of water, and they have now reached eight grams, Strelkov noted. Researchers are at a loss to explain the situation. In their opinion, these changes are not man-made because no one lives on Kildin Island. However, negative consequences can be the result of global warming which is obviously affected by the anthropogenic factor.

Higher temperatures in the region of the Barents Sea are not compensated for by all-out precipitation. Consequently, the lake receives more salt water, and its water layers tend to change. The hydrogen sulfide layer spreads higher and higher because of the less pronounced vertical water-density levels. It is hardly possible to stop this process, but researchers note that they should not stop studying Lake Mogilnoye.

"In the future, the world's oceans will have their own hydrogen sulfide or hypoxic zones," Strelkov explained. "Oxygen takes longer to dissolve in warm water due to climate change. Besides, many organic substances seep into the ocean because of industrial pollution. Large amounts of precious gas are spent on oxidizing this water, and ‘dead' zones appear down below. The Black and Baltic seas already have these zones, and the same process is beginning to take place in the world's oceans. So far, we don't know how a shortage of oxygen will impact the underwater animal and plant kingdoms or fishing volumes. Lake Mogilnoye serves as an improvised aquarium for watching and studying these changes," he added.