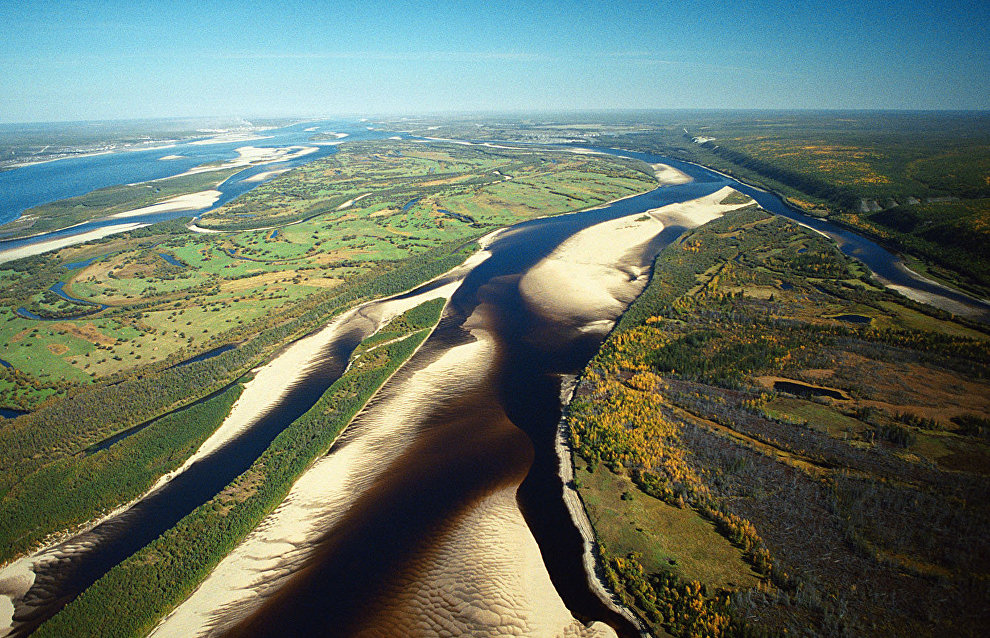 The Ob, Yenisei and Lena rivers contribute about one half of the total freshwater runoff to the Arctic Ocean

Researchers at the Shirshov Institute of Oceanology of the Russian Academy of Scientists (RAS) and specialists at the Moscow Institute of Physics and Technology have studied the distribution of river plumes (freshwater masses — Ed.) that are formed in the seas of the Russian Arctic as a result of the intermixing of fresh river water and saltwater.

"River plumes are freshwater masses that form in the estuaries of rivers and spread over the surface of sea saltwater in a relatively thin layer. The dynamics of river plumes are largely determined by the wind and the amount of river runoff that forms them," said Senior Research Associate of the RAS Institute of Oceanology Alexander Osadchiyev.

According to the study, the total volume of water flow from the Ob, Yenisei and Lena rivers into the Kara and Laptev seas is about 2,300 cubic kilometers per year, or about half of all the freshwater flowing into the Arctic Ocean. Most of the freshwater flows into the sea during the ice-free period from June to September. The river plumes formed by the Ob, Yenisei and Lena rivers are the largest in the Arctic and some of the largest in the world's oceans.

The research indicates that during ice-free periods the continental discharge from the Ob and Yenisei rivers accumulates in the Kara Sea for the most part. Topographic barriers posed by the western coast of the Taimyr Peninsula and Severnaya Zemlya archipelago prevent the Ob-Yenisei plume from spreading to the Laptev Sea. This only takes place in very specific wind conditions. In contrast, the Lena plume almost always spreads to the western part of the East Siberian Sea as a large water body and later forms a narrow low-salinity littoral current in the eastern part of the East Siberian Sea. This Siberian littoral current is supplemented by the freshwater flow from other large rivers like the Indigirka and Kolyma and spreads further east to the Chukchi Sea.

"Freshwater from the rivers flowing into the Arctic Ocean mixes very slowly with the saltwater, which creates very stable river plumes at the big rivers. As we have found out, freshwater can be carried by the wind many hundreds of kilometers to the east. Our study has allowed us to estimate the transport of freshwater discharge between the Kara Sea, the Laptev Sea and the East Siberian Sea during ice-free periods," said Assistant Professor, Deputy Head of the MIPT Chair of the Ocean Thermohydromechanics Sergei Shchuka.

Scientists believe that the data received are vital for understanding the processes of ice formation, bio productivity and many other phenomena in the Arctic that are influenced by mainland water runoff.

The study was conducted in cooperation with the Ilyichev Pacific Institute of Oceanology and the Tomsk Polytechnic University, and with support from the Ministry of Science and Higher Education, the Russian Government, the Russian Foundation for Basic Research (RFBR), the Russian Science Foundation, and the Presidential Grants Foundation.

More details on the study can be found in the magazine Scientific Reports.