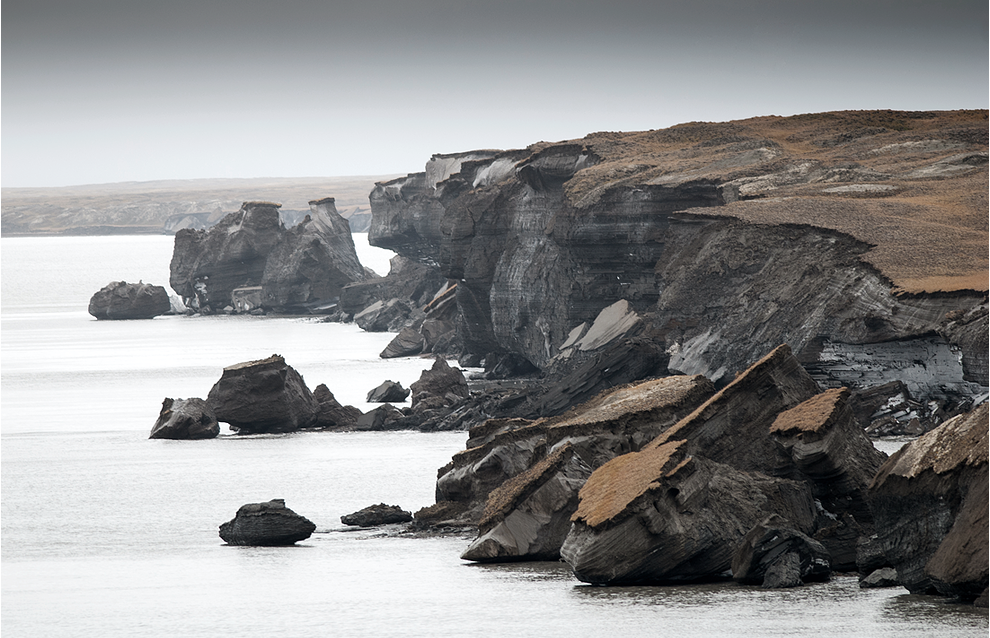 Most people have heard something about the mysterious Sannikov Land, which has fired up the imagination of explorers and travelers for two centuries. Few of us know, however, that legend places this mythical island north of the New Siberian Islands. Arctic.ru looks at the origin of the Sannikov Land legend and other matters of interest related to the New Siberian Islands.

The New Siberian Islands, an archipelago that may gradually disappear from the face of the earth, is located in the Arctic Ocean between the Laptev Sea and the East Siberian Sea. Scientists believe that the coastline of these islands has been shrinking.

The islands are composed of permafrost alternating with soil, and the global warming of the last few decades has led to the melting of ice and the contraction of firm ground.

"The disintegration is caused by the thawing of permafrost, which leads to soil subsidence and landslides. Soil is washed into the sea and the islands are contracting," said Konstantin Zaitsev, Vice President of the Association of Polar Explorers, who headed a 2012 integrated expedition that studied the current state of the New Siberian Islands.

The land of mammoths

Meanwhile, the New Siberian Islands, like many other Arctic territories, are of immense historical, scientific and cultural importance. The archipelago is known as the land of mammoths, whose remains are still scattered in abundance across the islands. Originally it was mammoth tusks that attracted people to these far-off frigid lands. In 1770, a Yakutsk merchant, Ivan Lyakhov, saw a herd of reindeer make it from the coast straight to the sea. This was a surprise because he had never heard of any land in the offing. Lyakhov followed the herd and found unknown islands abounding in mammoth tusks. He reported the find to St. Petersburg and asked for a monopoly to be introduced on business operations on the archipelago. Empress Catherine the Great ordered the islands to be named after Lyakhov and gave him the right to use the tusks as he saw fit.

Of course, there were other big animals there aside from mammoths. Excavations revealed the bones of horses, saiga antelopes, buffalo… How did they survive and what did they feed on in these frigid parts, lacking in rich vegetation? Scientists believe that the islands were part of a big continent, Arctida, which could have had a totally different climate.

"As for the Arctic, we have a lot of theories regarding climate change. The Arctic was a blossoming land. All excavations and animal remains confirm that it was not always covered in ice throughout its history. The reindeer could have reached it over ice, but they would go somewhere only if they knew they could find food. They won't go somewhere if there's only an ice desert ahead. Or if they are driven there by humans," Zaitsev said.

In fact, animal bones are not the only things that have been unearthed from the permafrost. People have found the seeds of Pleistocene plants (the Quaternary period that lasted from 2.5 million to 11,700 years ago), grasses that are more characteristic of steppe vegetation rather than the Arctic tundra. These grasses grow on low hills formed by a melting ice stratum. Ancient plants that big Arctic animals could have grazed on come to the surface as ice melts and soil subsidence progresses.

The New Siberian Islands is where the legend locates the mysterious Sannikov Land. In the early 19th century, merchant and trapper Yakov Sannikov reported that he had seen vast lands north of Kotelny Island. Numerous expeditions have sought to find these lands ever since, often at the cost of human life.

An expedition led by Lieut. Pyotr Anjoux fruitlessly looked for Sannikov Land in the 1820s. Russian geologist and Arctic explorer Baron Eduard von Toll devoted many years of his life to the search. In 1900, he went to the New Siberian Islands on board the Zarya as a member of a Russian polar expedition. The expedition failed to find Sannikov Land even though it managed to carry out a comprehensive study of that part of the Arctic. Moreover, Baron von Toll was lost without a trace in the course of the exploration survey.

Geologist and writer Vladimir Obruchev used the story as the plot of his novel, Sannikov Land, or the Last of the Onkilons, which was published in 1926. The novel describes a warm wooded territory populated by the Onkilon tribe. A movie based on the novel was released in the 1970s.

Sannikov Land has not been found, but there is a theory that it did exist. Vitaly Stepanov of the Arctic and Antarctic Research Institute suggested that it was an island made of soil and ice that melted. According to polar scientist Vasily Burkhanov, Sannikov Land was a drifting ice island.

Mysteries of the past and predictions for the future

Despite a rich history of exploration, the New Siberian Islands have yet to be fully explored. In the Soviet period, the islands housed a number of polar stations that conducted regular research. But today the stations are abandoned. Now that the North Sea Route is growing in importance as a transport artery, the archipelago is begging to be explored.

"The archipelago is one of the key points because it is practically in the middle of the North Sea Route. The distance is approximately the same from the Kara Strait and Chukotka," Zaitsev said.

In his view, weather stations should be restored along the North Sea Route, including on the New Siberian Islands, to ensure navigation safety.

In addition, studying how the islands were formed and melted could lift the veil over the future, not only in the Arctic but also the world over.

"We need to conduct full-scale investigations for many years. There are solar activity cycles that affect climate change, but they can only be studied with the help of long-term monitoring," Zaitsev said.