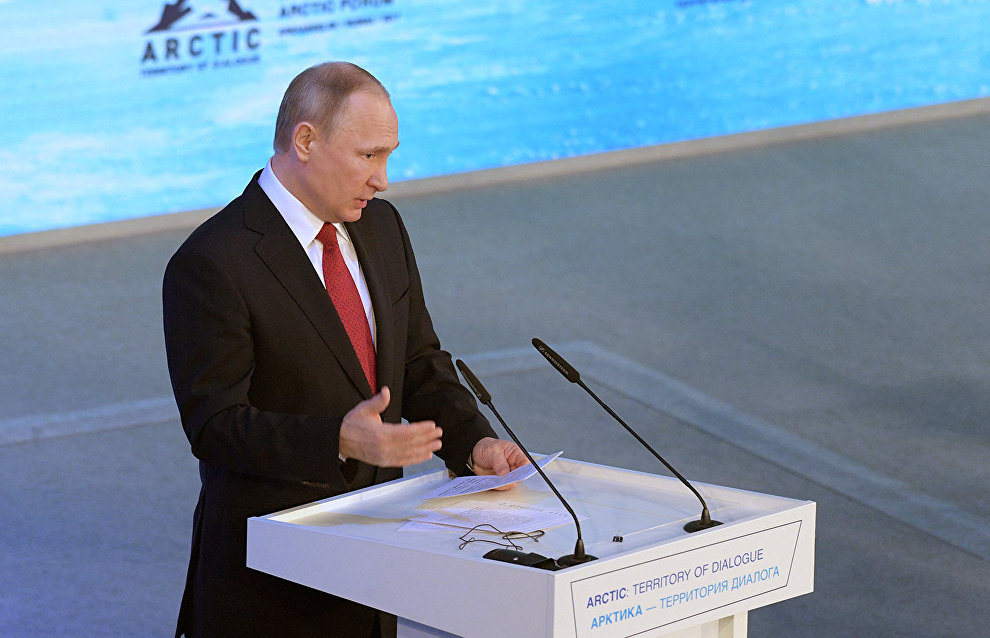 Putin: Russia aware of responsibility for the Arctic

Russia is eager to develop the Arctic region and is aware of its responsibility for the steps it takes in the Arctic, President Vladimir Putin said at the closing ceremony of The Arctic: Territory of Dialogue international forum, which gathered in Arkhangelsk on March 29-30.

"Russia, which accounts for almost one third of the Arctic zone, is aware of its special responsibility for this territory. Our goal is to guarantee sustainable development of the Arctic, which means the creation of a modern infrastructure,  exploration of resources and industrial development, the improvement of the indigenous Northern peoples' living standards, and the preservation of their culture and traditions," the President said.

He added that these matters cannot be regarded separately from preservation of the Arctic biodiversity and ecosystem.  "It is gratifying to know that environment protection is among the key priorities of international cooperation in the region," Putin said and quoted the Barneo research base and the Yamal SPG gas liquefying project as examples of such cooperation.

"Russia proceeds from the point that there is no conflict potential in the Arctic region. International norms explicitly determine the rights of littoral states and other countries and provide a firm basis to address any problems," he concluded.

The Arctic: Territory of Dialogue international forum, established in 2010, is one of the principal venues for discussions on the problems and prospects of the Arctic region. Its aim is to pool international efforts so that the Arctic can be successfully developed. The participants discuss improving living standards in the Arctic, development of transportation and environmental issues.