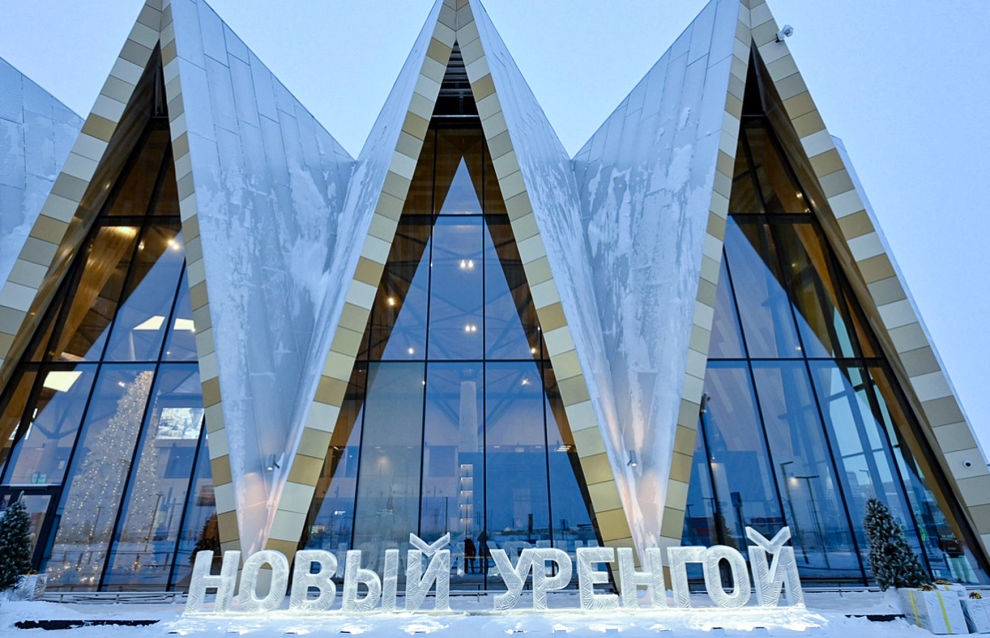 An airport terminal with a total area of 19,600 square meters opened in test mode in Novy Urengoi. The terminal was designed to look like traditional tents or huts of the indigenous people of the North.

Governor of the Yamal-Nenets Autonomous Area Dmitry Artyukhov, Deputy Head of the Federal Air Transport Agency Vladimir Poteshkin and Director General of the management company Regional Airports, Yevgeny Chudnovsky, took part in the opening of the terminal. The officials met a test flight from Salekhard.

The new airport facility will be the first fully equipped air terminal in Yamal. The airport with 12 check-in counters and five boarding gates will be able to process up to 840 passengers per hour.

“The terminal has everything to make passengers comfortable: cafes, shops, a mother and child   room and a children’s play area. There are 11 elevators, including one for passengers with limited mobility, and four escalators. Equipment for screening, check-in and passenger service has been installed. The new luggage system has 350 meters of conveyor belts and is capable of handling up to 540 pieces of luggage per hour.

As noted, the building has been fully adapted to the conditions of the Far North and has three heated jetways, which will allow passengers to comfortably board a plane. Also, the terminal is equipped with a warm bus gate, designed for boarding and disembarking plane shuttlebus passengers indoors.

Dmitry Artyukhov emphasized that not only Novy Urengoi residents, but also people from nearby towns and districts have been waiting for the new terminal. The governor thanked the large team that worked on the airport – the engineers, contractors, and the road builders that renovated the runway.

“For northerners, flying is a necessity, and of course, flying conditions should be the best. Five years ago we came up with this project, but for many people it seemed impossible, there was a lot of skepticism. But we succeeded – now we have not only a unique new terminal, but also an entire renovated airport. This means that security issues that are largely invisible to passengers were improved – for example, we have the best and most modern lighting equipment installed. I am very pleased with what I saw today, but the main assessment will be given by people tomorrow, when flights begin to operate from the new terminal,” said the head of the Yamal-Nenets Autonomous Area at the opening ceremony.

The construction of the terminal lasted exactly two years and involved more than 800 builders and over 30 units of large construction equipment. A boiler house with a capacity of 20 MW was built to service the terminal. In parallel, the station square was improved, with parking for 300 cars created.

“Much was done here for the first time. This is the first airport infrastructure modernization project in Russia implemented under a concession agreement. The large airfield project was carried out under the short construction season and between flights without closing the airport. For the first time in this climatic zone, jetways were installed and will be used. And of course, we have this unique architecture that embodies the idea of ​​warmth and comfort, which is so often lacking in the harsh conditions of Yamal,” said Yevgeny Chudnovsky.

On December 26, test operations of the new terminal will begin, and all flights will be transferred to this new terminal. Starting in January, Aeroexpresses will start running between the railway station in Novy Urengoi and the new airport. If you have tickets for a plane or a long-distance train, you can ride the Aeroexpress train for free.