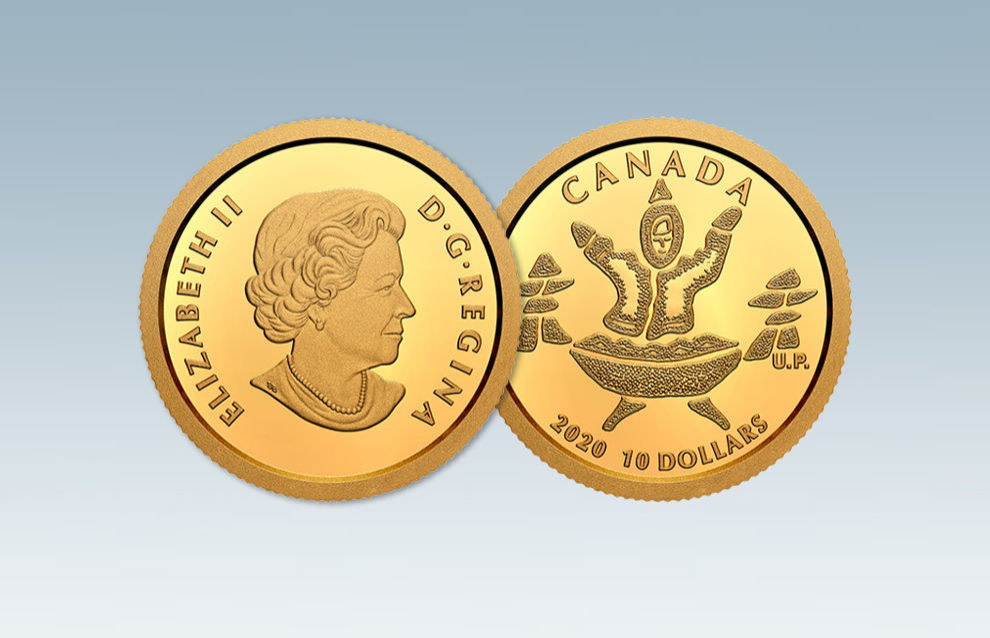 Canada releases 10 dollar coin featuring an Inuk and a Qulliq

The Royal Canadian Mint, on behalf of the Bank of Canada, minted a 10 dollar circulating commemorative gold coin in 2020, depicting elements of the culture of the Inuit, an indigenous people of North America.

The reverse of the coin bears a qulliq, a traditional oil lamp, which is an important symbol of Inuit culture. It represents hearth and home in the Arctic, where it embodies the strength and care provided by the women who nurture its flames.

Both land and sea provide the materials for the qulliq: rendered seal fat (or blubber) is used as slow-burning fuel, which gets absorbed by tufts of Arctic cotton and moss that serve as lamp wicks.

Inuit oil lamps are believed to have been used more than 3,000 years ago. Most of them were carved from soapstone, but there are also examples made from a special kind of pottery. The lamps varied in size and shape, but most were either elliptical or crescent-shaped and housed takkuti (wicks), also known as lamp feeders, which were made of wood, particularly willow, soapstone or elephant bones. Qulliqs are illuminated along the edge of the lamp, providing warmth and pleasant light. A piece of seal blubber was left to melt over the lamp, feeding it with more fat, but these lamps had to be constantly tended by cutting the wick so that the lamp did not emit smoke.

The reverse also depicts traditional stone figures from the Inuit culture. Translated literally, the word "Inuksuk" (singular) means "substitute for a person." Researchers have identified between 8 and 24 types of Inuksuit. Usually it is a separate stone or a pile of stones stacked on top of each other to indicate a road, signal danger, designate a revered place or mark a food cache.

The obverse features the effigy of Her Majesty Queen Elizabeth II by Susanna Blunt, which has been used on the Royal Canadian Mint coins since 2003.