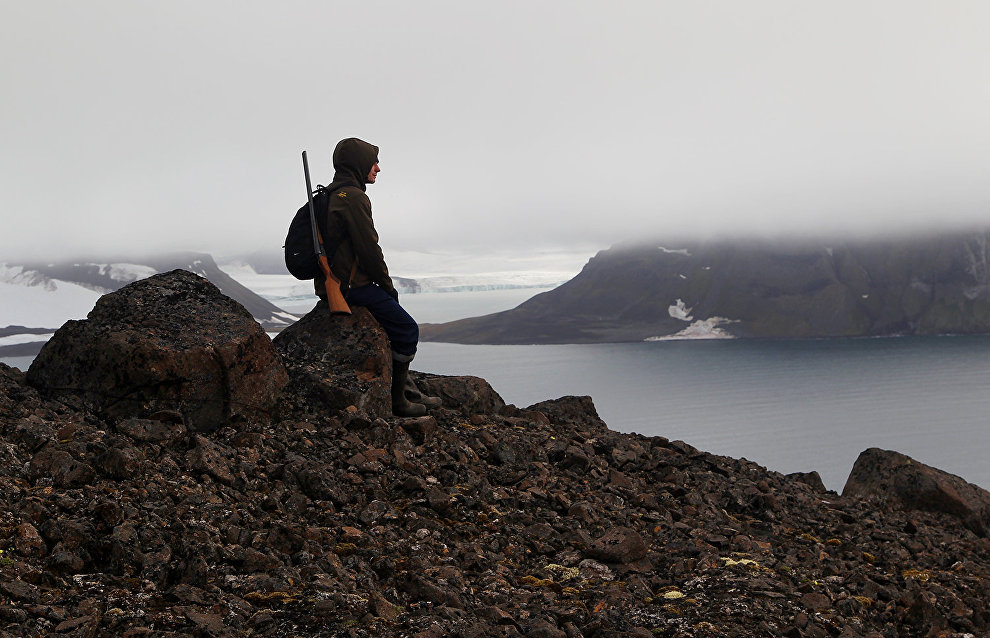 From June to October, most Russian Arctic National Park specialists are isolated from the outside world. However, some of them winter in the Arctic when the isolation lasts for six months or even longer, in the more severe conditions of a polar night at low temperatures. Employees at the largest protected natural territory in the Arctic share their experiences of living in isolation in the Arctic.

Artyom Polikarpov, a specialist in the national park's environmental education and tourism department, has accompanied tourists on Arctic expeditions aboard the 50 Let Pobedy nuclear icebreaker for two years now. Having a degree in linguistics, translation and interpretation, Artyom, along with other staff, manages the safety of tourists and the icebreaker crew during landings on Franz Josef Land archipelago and at the North Pole. In 2019, he spent over two months in the Arctic but was thoroughly prepared for such long isolation.

"You have limited space on the icebreaker — you can't go anywhere except during landings on the islands and at the North Pole. But there are great opportunities to enjoy landscapes and see animals. You definitely won't see this on the mainland.

While on deck, you always see something unusual and unique — glaciers, amazing Arctic islands, unique species of Arctic animals, and icebergs of various shapes and sizes. Besides, physical activity makes you feel better aboard a ship in isolation. In our free time, my colleagues and I regularly go to the gym on the icebreaker, where you can work out individually on exercise machines or play team sports: football, volleyball and tennis. There is also a swimming pool, although quite a special one, as water is collected from the sea and heated to a usable temperature. So, everyone who swims in this pool can say they swam in the Arctic Ocean or the Barents Sea," says Artyom Polikarpov.

Polikarpov lists the three things you must do in isolation. First, staying in cramped conditions in a small room (state inspectors live two months in one small cabin), it is necessary to find a common language with your neighbors. It is unacceptable to have a conflict with someone during these cruises because you won't be able to leave the ship. The life and health of those who visit this natural territory can depend on how competent and well-coordinated their interaction with others is.

Second, you need to stay active and walk the deck during breaks.

Third, you won't be able to buy anything you need during the expedition, like personal items or essentials for the entire time at sea.

"You have to carefully plan what you will need on the ship during the expedition. The park staff is provided with food and bedding on the ship. But you have to have other things, including expedition equipment, weapons or personal hygiene items," Polikarpov emphasizes.

Darya Antufyeva, a national park environmental education and tourism specialist, is one of the few women who regularly go on long field expeditions. Her skills for survival in extreme conditions, her activity and knowledge of English make her an indispensable crew member on these expeditions. Last season, Antufyeva took two cruises to the Arctic, after which she stayed at the Omega stationary field base on Alexandra Land Island until the end of the season.

"The most beautiful thing in the Arctic to me is the lack of communication with the outside world. When I got to Omega with internet access, I deliberately didn't use it for another month; I took a break from it. You tend to wean yourself from chats and internet surfing and start living in the real world. The only minus is you worry about your family and friends," says Antufyeva.

A another topic in an Arctic expedition is the food and cooking. Darya laughs, remembering that before her first field season she was jokingly asked if she could name a hundred dishes that can be cooked with canned beef stew (supposedly, this is a selection criterion to go to the Arctic). Apparently, she passed the selection, but in any case, she never doubted what to cook at Omega.

"In fact, polar explorers have everything that is really necessary for a good, healthy diet. We only don't have what could be called the excesses that you get used to on the mainland. But we have all the staples — meat, vegetables, cereals, butter, and fish. And we were constantly experimenting. We always had various soups, even cheese soups. Casseroles, pasta in creamy sauces — we cooked almost every day, including pancakes for breakfast. And when we had nothing to do and wanted sweets, we cooked an apple pie or muffins for tea," she says.

Perhaps, state inspector Dmitry Ryumin knows best about complete isolation in the Arctic. Along with his partner and colleague, Denis Mennikov, he has spent two long Arctic polar nights, wintering at the Omega stationary base. He performed his daily tasks of patrolling the territory and maintaining the polar station.

"I spent two seasons in a row in the Arctic. The first summer was at the Bukhta Tikhaya polar station where I worked and met tourists. It was pretty easy: summer, a polar day and a lot of people around. The season flew by quickly. The second winter I was on Alexandra Land, at the Omega base. In the winter, the situation changes: it's always dark outside the window, live communication is minimal. Life is more steady. To be honest, it's an introvert's dream. I feel very good here, I just miss my family and relatives. And I really want crisps," the polar explorer says.

Ryumin is now completing his time in the Arctic and will soon return to the mainland.

According to most polar trekkers, wintering in the Arctic is simple if you are prepared to live a life regulated by a strict daily routine; you must follow the daily routine and follow the traditions — New Year is an obligatory celebration at Omega, as well as the first sunrise at the end of February. But the most important thing is to avoid getting down by doing everyday work and strictly planning your activities.