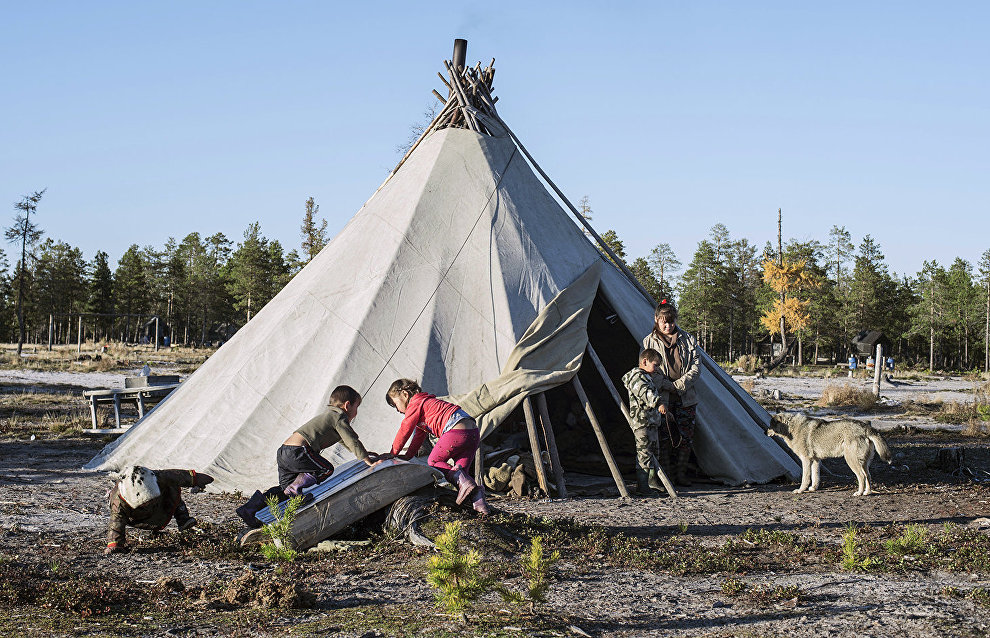 On October 9, the Taimyr Nomads: Culture, Art and Craftsmanship exhibition opened on the second floor of the tower of the Peter the Great Museum of Anthropology and Ethnography  (the Kunstkamera), the Russian Academy of Sciences in St. Petersburg. The exhibition is dedicated to the 90th anniversary of the establishment of the Taimyr (Dolgano-Nenets) National Territory and was organized in cooperation with the Taimyr House of Folk Art. It is a showcase of works by contemporary Taimyr artists inspired by the traditional culture of two small indigenous peoples, Dolgans and the Nganasan people.

Some of the remarkable exhibits include the paintings of Dolgan artist Boris Molchanovmade from rovduga [soft buckskin, the skin of a male reindeer – Ed.], which was formerly used to make summer chums [tents of skins]. The decades–old skins that absorbed the smoke of hearths, people’s voices, the sounds of tambourines and old legends have turned into artistic canvasses. Works by Nganasan graphic artist Motyumyaku Turdagin describe the daily life of the Nya [the way the Nganasan people call themselves – Ed.], while works by two Dolgan cousins, each called Nikolai Kirgizov, and Nganasan artist Alexei Chunachar are further proof of the inimitable craftsmanship of northern bone carvers. From the earliest times, the indigenous Arctic dwellers carved various household items, decorations and parts of reindeer sledge out of mammoth tusks and reindeer heads. Today, the items created by bone carvers are not seen as household items anymore but rather as works of art, changing the perception of the powerful centuries-old tradition.

The exhibition will be on until December 2020.

Another temporary exhibition run by the Kunstkamera is, Myths and Things: The Old Art of the Ekven Eskimos. This exhibition features items that were made by the distant ancestors of contemporary Eskimos, who are the world’s northernmost people that settled along the Bering Strait coast as early as the first centuries in our time. Not so long ago, there was a village, Ekven, in the area where bold marine mammal hunters had lived for many centuries.

They lived in full harmony with nature; they were hard-working, daring and resourceful: they made unsinkable fast boats, rotating harpoons and ingenious tools. For example, they made hunting gear and household items from the bones of animals, usually from walrus tusks, decorating them with delicate patterns. Many bone carvings are, indeed, masterpieces.

According to ancestors’ customs, things remained with their owner after his or her death. Ekven dwellers buried their kinsmen together with their belongings on the slopes of two hills near the settlement. Today, this area, known as the Ekven Burial Ground, is a unique Arctic archaeological landmark. Researchers believe that there are at least 500 graves in the area; so far, 330 graves have been found during archaeological digging at the site. What is amazing about them is the abundance, variety and the good condition of the hunting gear and household items that belong in different – Punuk and Birnirk – archaeological cultures and the earliest Old Bering Sea and Okvik cultures.

People visiting the exhibition will get a rare opportunity to see old Eskimo hunting and fishing gear and household items from the museum collection. Each exhibit is unique, with a story behind it, while timeless myths are hidden in ornamental patterns.

There are also plans to screen, while the exhibition is on, footage from a film by director Alexei Vakhrushev. Born in Chukotka, he is well acquainted with the life of the Eskimos, the descendants of old-time hunters. The animated documentary The Book of the Sea was filmed in 2018 and tells the story of the life of those who go out to sea to hunt in the cold water of the Bering Strait. Although the story is set in our time, audiences will be able to see that the connection with ancestors and their stories and myths continues and gets passed from one generation to another.

The museum is also prepared to keep schoolchildren occupied with several activities specially designed for them, including the following:

— Games based on the exhibits on display (6+). You can join children to help a hunter prepare for hunting and see various animals carved into the bone that decorate the hunting gear (an event available to entry ticket holders on Saturdays and Sundays from 11 am until 5 pm).

— Rope games (6+). Like other ethnicities, the Eskimos made rope figures not only for fun but also to describe and maintain the world order. Activities involving rope often went hand in hand with the narration of myths and fairy-tales. People will master techniques of working with rope and learn to create figures that go well together with Eskimos’ traditional way of life (an event available to entry ticket holders on Saturdays and Sundays from 11 am until 5 pm).

— Making sculptures out of clay while listening to fairy-tales (for families with children aged between 6 and 12). The reading of Eskimo fairy-tales and making sculptures will allow you to gain an insight into folklore characters of subtle mind and imagine how they feel, express your impression of the tales and better understand the Eskimos (on Sundays – except October27 and November 3 – at 12 noon and 3 pm; booking is required).

—Why Does an Archaeologist Need a Microscope? (for youngsters aged11 to14) is a class in traceology (the study of traces) from the Face to Face course for schoolchildren to learn about how and why archaeologists study traces on items from excavations and what information dents, incisions, polished surfaces and scratches can provide. They will learn about experiments carried out by scientists and examine archaeological artifacts on display at the museum through the prism of traceology. The class is taught by archaeologist and curator of the exhibition Natalya Aleksashenko (on Sunday, October 20; tickets to attend the class required).