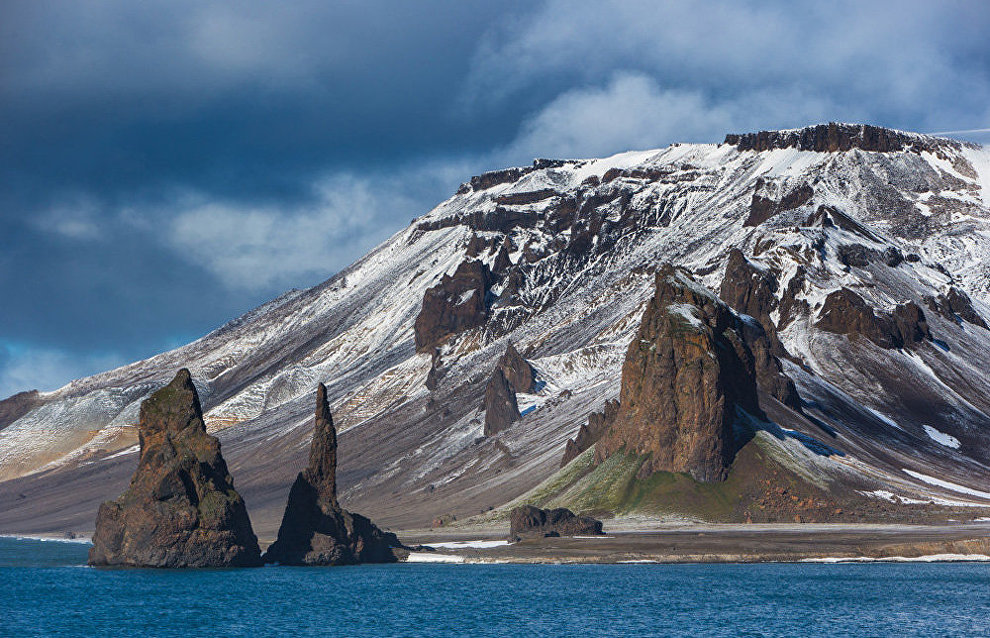 Educational tourism is on the rise at Russian Arctic National Park, which is situated on the northern edge of Severny Island, the Novaya Zemlya Archipelago and 192 islands of the Franz Josef Land Federal Nature Reserve. Maria Gavrilo, the park’s Deputy Director for Research, spoke about the attractions of the park and the reserve, and the specific features of the Arctic tourism, in an interview with arctic.ru.

What attractions can Russian Arctic National Park offer to tourists?

Above all, the park's pristine Arctic wildlife is its primary attraction. This may be of interest to a certain category of tourists, those who are into it, are fascinated by wildlife and can appreciate the beauty of pristine landscapes and majestic glaciers.

We have several endemic animal species here, and this is a scientific fact. Our waters are home to bowhead whales of the Svalbard (Spitsbergen) population, which are extremely rare in the northern hemisphere. They have almost never been observed in Russian waters. Spotting them off the neighboring Svalbard is a much less likely proposition than off Franz Josef Land, where they re-appeared quite recently after almost going extinct.

This is the only place where you can spot a narwhal in Russian waters, that is, if you're lucky. Anyone who is interested in walruses, ivory gulls, guillemots and kittiwakes can see them in our park and reserve.

For those interested in the history and structure of the Earth, our islands are an open-air textbook on geomorphology and geology. Our park has hardened lava flows, petrified trees and mysterious sandstone balls that have a lot to teach us about the Earth's ancient history… Many of them are unmatched and can be called geological monuments, such as the famous Rubini Rock, the Tegethoff Cape basaltic dykes and mysterious stone balls on Champ Island… These and many other geological sites are not only rich sources of information about ancient history, but are also truly beautiful and magnificent natural wonders.

The underwater world is also interesting and surprisingly rich, especially for the frigid Arctic waters, which are hidden beneath ice most of the year.

The history of exploration of the islands and their indigenous culture is a draw in and of itself. There are monuments and landmarks pertaining to the history and the culture of different countries, which make the historical and cultural heritage of Russian Arctic National Park unparalleled among other protected areas and the Arctic region as a whole, as they highlight its status and international importance. The history of our islands goes back to the discovery and the development of the western sector of the Arctic from the 16th century to the present day. Traces of a Dutch expedition led by Barents (the remains of a winter cabin and a wooden boat) on Novaya Zemlya in the Ice Harbor are the national park's oldest landmarks that can be dated back to a specific time. The Golden Age of discoveries took place in the second half of the 19th -early 20th century. The Franz Josef Land archipelago, which later became a base for numerous polar expeditions, was discovered during an expedition to the North Pole in 1873.

Those who love fresh air and vast expanses, and aren't afraid of the cold, can have lots of fun in the park.

As compared with previous years, are more or fewer tourists coming to Russian Arctic National Park?

If you think of it as a graph, it would look like this: it went up until it reached a peak, then it dipped, and now growth is resuming.

We have fairly representative statistics, with 25 years of tourism in Franz Josef Land. Things weren't monitored much until the park administration was created. However, we can restore the picture in broad strokes. At least, we know the number of vessels that came here. An icebreaker can carry 100 people. If you look at the past 25 years, the statistics show an increase in the tourist flow to Franz Josef Land and Novaya Zemlya, even though tourism is held back by border regulations and the need (so far) to call the Murmansk Port in order to pass border and customs control.

One thousand tourists during the 2012 season is the largest number of tourists we ever had here. It's almost nothing by the standards of other tourist destinations, but more than enough for a protected Arctic area.

That sounds impressive by Arctic standards.

Yes, if you compare this to our Arctic territories. Only Wrangel Island can compare with us. Svalbard has a markedly larger tourist flow, with about 15,000 tourists a year. But they have no visa requirements, and Svalbard is not a protected area. Indeed, protected areas occupy two-thirds of its territory, but one-third is a regular, not densely populated, but permanently populated area, with all the modern infrastructure, including towns, an airport, a seaport, hotels and anything else a tourist may want. That is, the infrastructure is built not in the protected area, but around the town, and tourists ride snowmobiles outside Longyearbyen, not in protected areas, where access is strictly regulated.

That is why they have 15,000 tourists per year, while we have only 1,000. According to preliminary information, about 1,200 tourists visited Franz-Josef Land this year on seven icebreaking cruise ships and four motor vessels. However, these tourists go to about 10 designated tourist areas, rather than spreading out all over the archipelago. The southernmost destination, Cape Flora, is home to many historical sites, because this is where many expeditions went. At the same time, it's the most tender and vulnerable spot. It has a lot to offer in terms of spectacular nature, but it's eroding, also due to natural causes, such as global warming. Combining tourism and nature conservation in such sensitive areas is a major challenge.

When does the park open for the tourist season?

Our tourist season lasts from mid-June to early September (at the latest), that's why we mostly do cruise ship tourism.

Your website clearly indicates areas that are off-limits to tourists.

Yes, but these regulations do not cover all of them. We don't have regulations for Cape Flora yet, because it's a complicated area, and we don't have enough data for local zoning. We decided to first fine tune our methodology on less complicated areas. We borrowed the idea of ​​creating "local tourist site management plans" from our neighbors in Norway, which they, in turn, had borrowed from the International Association of Antarctica Tour Operators (IAATO), an organization that deals with similar problems on the opposite side of the planet. Now, we need to get these plans to actually work, which turns out not to be so simple either.

In fact, it is imperative to raise awareness of issues pertaining to nature conservation and to teach people to respect nature from early age. Even strict regulations will do little to help us achieve a guaranteed result. People and tour operators come in all varieties: there are environmentally responsible travel agencies, and there are some that are, to put it mildly, less responsible, so it's difficult to keep track of everyone.

They do. Conservation and tourism department employees must protect visitors from bears, and bears from tourists, and also enforce compliance with environmental regulations. However, there are lots of ins and outs. If we manage to establish a dialogue with a tour operator, then tourists follow our recommendations to a T. If not, then there isn't much we can do. The fact is that our escorts have to rely on tour operators during such trips, as they live on tour boats, that is, on their turf. We could enforce our terms only if we were absolutely independent.

Do you use tour operators for scientific purposes?

Our research department did in 2014 and 2015. Tour operators gave us a ride to the archipelago, then took us from island to island, and this year, took us back to the mainland. Of course, we traveled in crew member accommodations, not as tourists. To return the favor, I gave lectures about birds to tourists, when they asked.

By the way, international tour operators always welcome researchers onboard: this is good for their reputation, and they consider it a boon. But I'm talking about major environmentally responsible travel agencies. Tour operators that focus on business believe it's not that important.

Overall, I believe our cooperation is quite good, although at first tour leaders expressed concern that we may slow them down on their way to their cherished destination, the North Pole, but we always deboarded fairly quickly and never caused too much delay.

I'd like to take this opportunity and thank QUARK Expeditions and Poseidon Arctic Voyages for providing assistance to our research team during the 2014 and 2015 seasons.