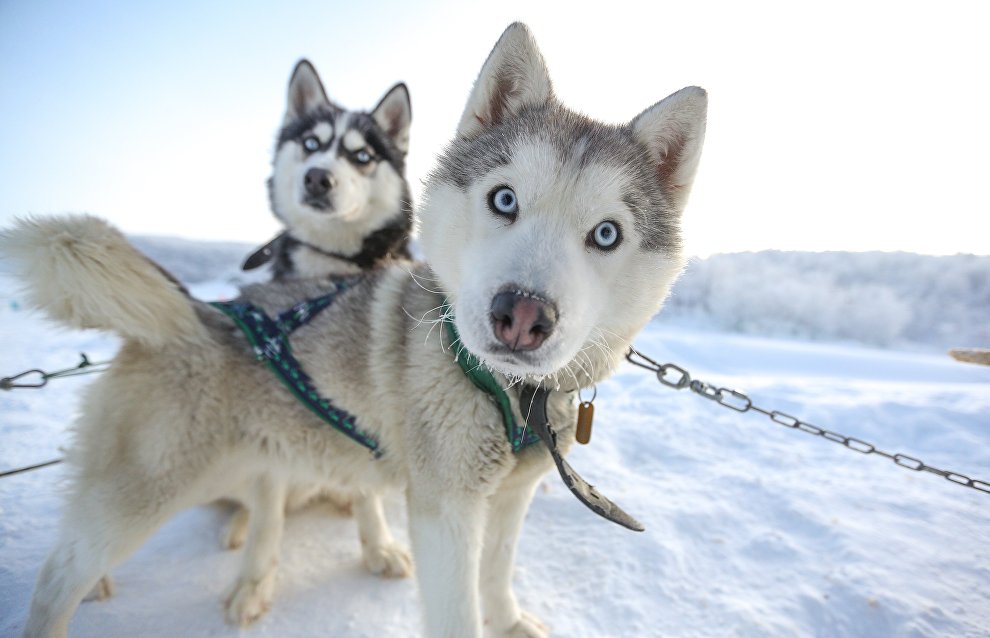 The first sled dogs appear in the Arctic 9,500 years ago

A group of scientists from various countries continued to study materials gathered during the excavation of a unique international cultural heritage site: the Zhokhov Camp (Zhokhov Island, De Long Island Group, New Siberian Islands Archipelago) discovered in 1989 by an Institute of the Arctic and Antarctic expedition. The studies took place as part of the QIMMEQ international research project about the origin and genetic history of the sled dog with Russian Science Foundation participation.

Thanks to the low temperature and anaerobic environment of permafrost many unique artefacts made from short-lived materials such as wood, birch bark, bones, reindeer antlers and mammoth tusks were perfectly preserved here. In particular, researchers found the oldest evidence that sled dog breeding transportation technology was used including parts of sleds and dog bones about 8,000-9,000 years old.

Researchers headed by Mikkel Sinding, PhD, University of Copenhagen, used the most advanced molecular and biological technologies to extract the nuclear DNA from the lower jaw of a 9,500-year-old dog found at the Zhokhov Camp and the lower jaw of a wolf from the Yana Camp (32,000 years old, the lower reaches of the Yana River, Republic of Sakha [Yakutia], East Siberian Arctic) and compared the materials they received with the genomes of 114 dogs, including ten modern Greenland sleds, and wolves from various regions of the world.

Spitting image of a Husky

Previous research on the Zhokhov Camp dogs showed that, based on the form of the skull, they could be classified as a well-developed dog species, while in terms of mass, size and body plan the remains were very similar to those of modern Laika-type sled dogs (Husky), which suggests the possibility that they were used for transportation (sledding).

"Combined with the pieces of the sledges we found, we have the evidence to suggest transport dog breeding," noted Vladimir Pitulko, Candidate in History, senior research fellow at the Institute of Material Culture History of the Russian Academy of Sciences and a key author of the research.

The latest research shows that the Zhokhov Camp dogs were genetically closer to modern sled dogs than to common pets. It is surprising that all three modern sled dog breeds — Siberian Husky, Alaskan malamute and the Greenland Dog — have a significant part of the Zhokhov Camp dogs' genetic heritage. It was noted that the Greenland breed of sled dog is the oldest among the existing breeds and has the least number of later impurities due to isolated territory.

"It would be inaccurate to say directly that Greenland sled dogs are the closest relatives to the Zhokhov Camp dogs, because all three breeds descended from them. However, I like this situation even more: I am pleased to see that people whose material evidence I have been studying for many years created and used the most ancient specialised breed: a sled dog, from which all current sled dog breeds originated," Vladimir Pitulko said. 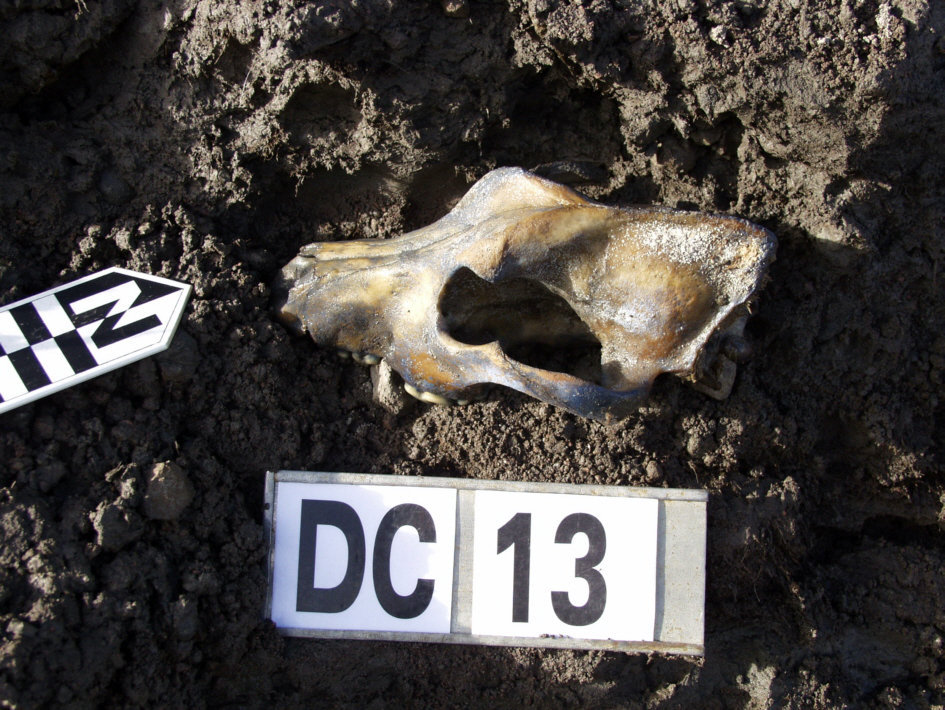 The skull of a dog. Zhokhov Camp. © Yelena Pavlova and Pavel Ivanov

Arctic in the genes

It is noteworthy that the genome of the Zhokhov Camp dog is the oldest of fully deciphered dog genomes. The results have allowed researchers to significantly expand the knowledge of the genetic differences between sled dogs and other breeds.

First, some of the biggest differences result from a specific diet: fattier food is used in the north and therefore the corresponding metabolism is especially active, not only in canids, but also in polar bears and people. Second, sled dogs have adapted to physical labor in the cold. They have well-developed protein genes involved in the processes of relaxing and increasing the permeability of blood vessels, which allows better absorption of oxygen and improves endurance. The same proteins likely serve as sensors for cold, because similar features were also found in woolly mammoths.

Similar results were obtained for the sequence of one of the calcium channels, which is important for muscle contraction when there is little oxygen: this can occur during heavy physical effort. Thus, the ancient dogs found on Zhokhov Island were adapted to environmental conditions and physical activity at the genetic level, which indicates quite a long selection line, which people performed in order to create a dog breed for a special (sled pulling) function.

"Of course, this selection was done through trial and error, by preserving the genetic lines of the animals that were most adapted to this labor," Vladimir Pitulko noted.

Based on the research, the ancestors of today's dogs and wolves actively exchanged genes, in particular, with paleo wolves like those found in the Yana Camp. They interbred freely, which is common for canids of the same size who are close to each other in an evolutionary sense. But eventually artificial selection took the path of hybrid exclusion, so genetically sled dogs (including the ancient dogs from the Zhokhov Camp) are quite different from today's wolves. 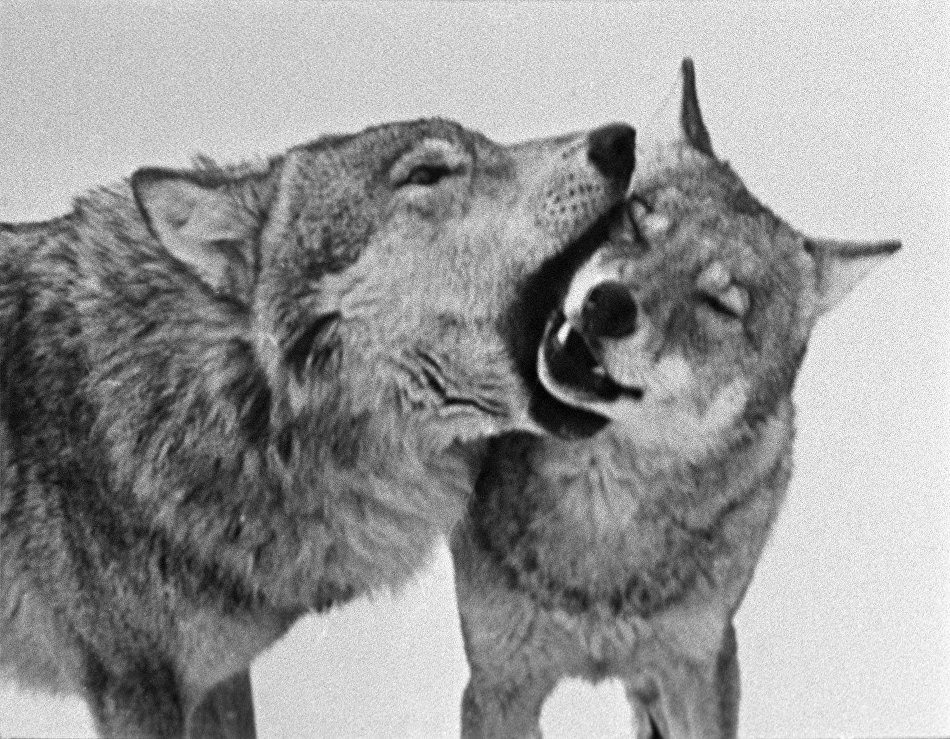 "Humans did not descend from apes, but people and today's apes have a common ancestor that lived 13 or 14 million years ago. The same can be said about today's dogs and wolves: these are different animals, although with very similar biology, physiology, and genomes "that sit on the neighboring branches" of the evolutionary tree; they are so close that they can interbreed.

The genetic lines of dogs and modern wolves separated only very recently (about 40,000 years ago), but Pleistocene wolves that belonged to the Bering population are their common ancestors. However, there still are a lot of unanswered questions in the evolution process of dogs and wolves, including where and when domesticated dogs, Canis familiaris, appeared as a species. Nevertheless, it has been proven that the local population of Pleistocene wolves was part of the evolution of the Zhokhov Camp dogs at an early stage. The genome of modern sled dogs also offers considerable evidence of interbreeding with wolves, although it is evident that selection took place through persistent culling of litters. This is an important observation dispelling the old myth that, allegedly, dogs were intentionally interbred with wolves to improve their blood in the traditional cultures of the north, which appeared in Russia thanks to Jack London. In fact, this practice is improbable: of course, hybrids are larger and more resilient, but they are difficult to control, aggressive and badly suited to sledding. When Jean Malaurie, the outstanding French ethnographer, expressed these ideas to his Inuit friends, they laughed at him. Neither sledding nor coexistence with humans requires aggression. Rather a willingness to submit and be trained was desirable, so an aggressive animal was culled immediately," Vladimir Pitulko explained.

Vladimir Pitulko also noted that the most ancient reliable finds of dog fossils are no older than 14,000 or 15,000 years, both in Europe and in Asia. Additionally, over 90 percent of all the data on the culture of the ancient people of the Arctic and the north gathered to date is from archaeological artifacts of between 2,000 and 3,000 years old or less. There only are about two dozen items older than 4,000 years, and most of them are located in Russia; 99 percent in Eastern Siberia. At the same time, there are even fewer landmarks where the remains of dogs have been found or evidence that dogs were used as a draft force for sledges. Based on this, scientists believed for a long time that people came to the Arctic only recently: 3,000-5,000 years ago. When radiocarbon dating was introduced the timeframe of when people arrived in the extreme north began to stretch further in the past. The first pre-Holocene evidence was obtained by Nikolai Vereshchagin in the 1970s, from the Berelyokh Camp in the lower reaches of the Indigirka River. 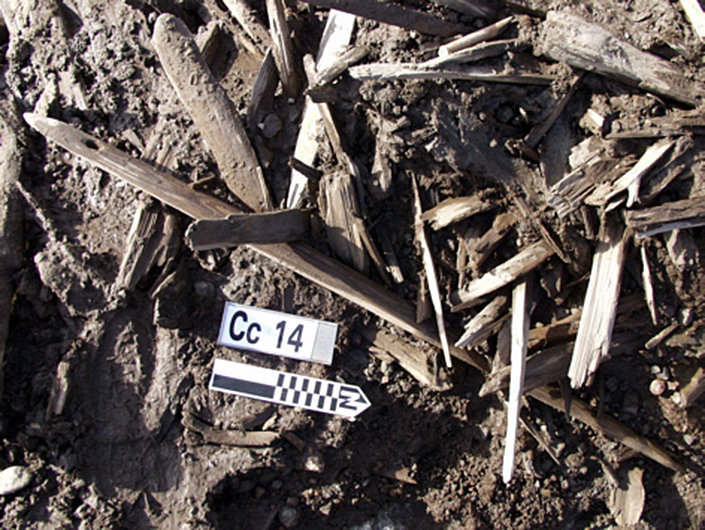 Zhokhov Camp, a piece of a sledge runner. © Yelena Pavlova and Vladimir Pitulko

At the time, the Zhokhov Camp was a breakthrough. It is the oldest evidence of successful human adaptation to the natural conditions of the high latitudes. Today, thanks to the finds made there and based on the results of radiocarbon dating and the time estimates of the corresponding mutations, it can be assumed that sled dogs appeared as a specialized breed about 9,500 years ago.

"It is clear that this process took some time, during which the domestication process was completed and the formation of a specialized breed, rather, a proto breed, began, which can be seen clearly in the finds from the Zhokhov Camp. However, for dogs, breed development is relatively fast. So the existing breeds (from the lapdog to the mastiff) developed over the past 300 years from the ready form of a domestic dog, which has existed as a species for at least 15,000 years," Vladimir Pitulko emphasized.

The dog is the first animal that people domesticated, and which, over time, became a loyal friend and helper. This essential ancient transportation technology was one of its functions. Dog sleds allowed people to cover long distances fast, including to move (migrate) when necessary, as well as logistics flexibility for life sustenance such as hunting or moving supplies. They also helped establish systems for long range trade and communications, thus greatly influencing sociocultural ties. For example, it was found that Zhokhov hunters obtained the obsidian (volcanic glass) they used to produce weapons from the Krasnensky field located 1,200 km to the east (low reaches of the Anadyr River). This hardly implies traveling such a long distance (although technically it was possible), but these data prove that this remote and sparsely populated Arctic region had a complicated social system and long distance ties and contact with neighboring groups. This means that sled dog breeding was an advantageous technology for the ancient people living in the Arctic; this technology could be considered essential to their lives. 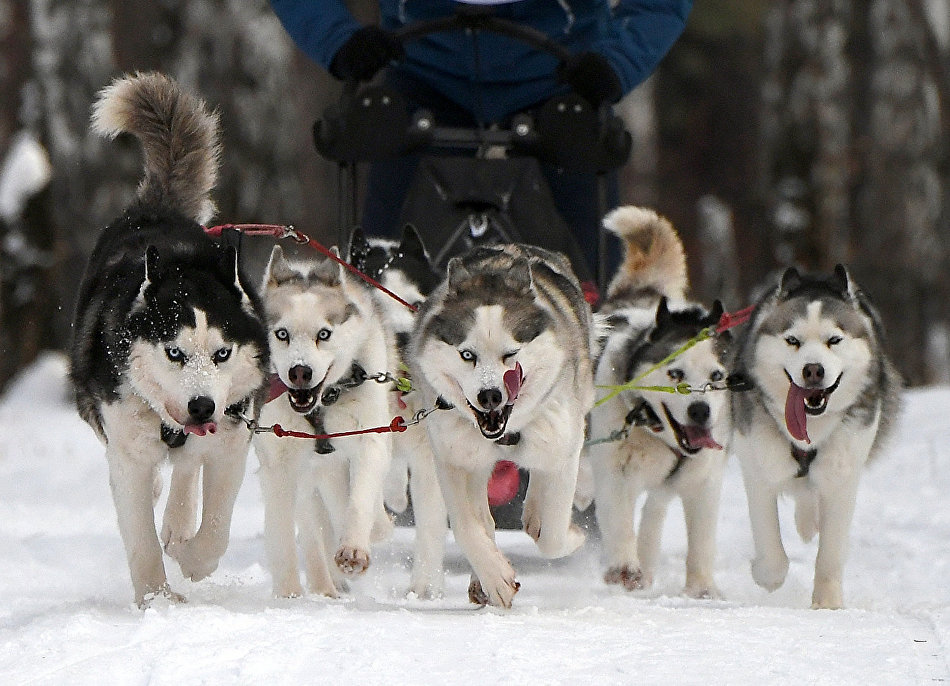 "Sled dogs and people living in the Arctic share 9,500 years of history: they lived together, covered long distances and hunted. It is noteworthy that the Zhokhov people cared about their old and sick pets until their last day. Joint adaption certainly must have been imprinted in the animals' genome. And the tradition of using dog sleds still exists in some groups in the extreme north in several Arctic regions. It is even seeing a renaissance as an extreme sport," Vladimir Pitulko concluded.

Read more about the results of the research in Science.