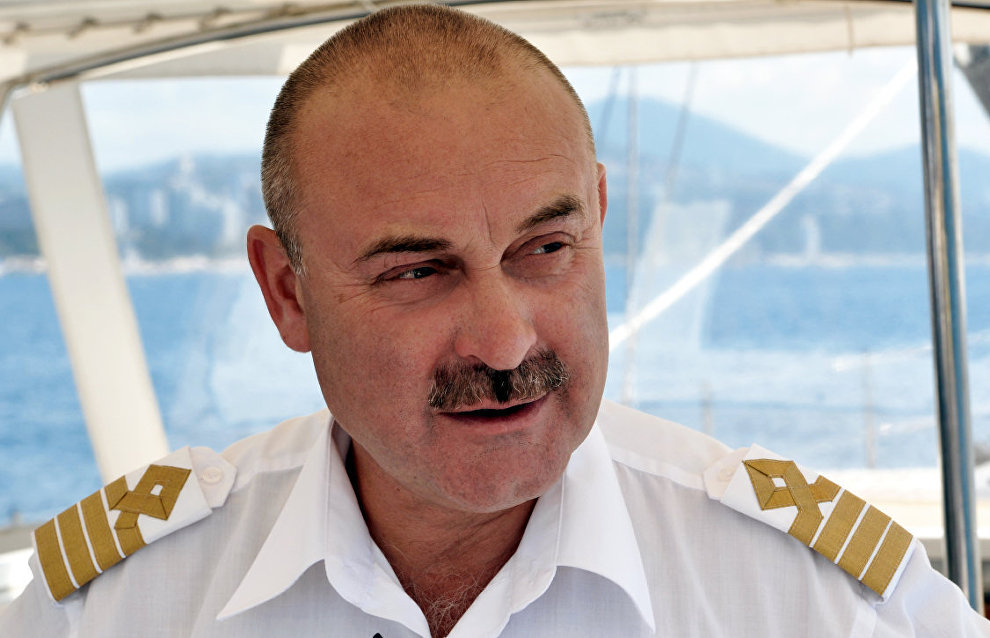 Sergei Nizovtsev: I knew from the start that we would make it

A trimaran under sail has navigated the Northern Sea Route for the first time in the history of global yachting. It took members of the Qingdao – China expedition 12 days to transit the Russian Arctic. The arctic.ru website has interviewed Sergei Nizovtsev, head of the Crimean Directorate of the Expedition Center of the Russian Geographical Society, about the origin of this project, various problems en route and how the world record was set.

How was the Qingdao — China expedition conceived? How did you join the expedition?

This expedition was conceived and organized by Mr. Guo Chuan. First, he contacted the Russian Embassy in China, presented his idea there and asked for help in coordinating the Chinese expedition's plans to transit the Russian Arctic.

Embassy officials supported the idea and sent a letter to Sergei Shoigu, President of the Russian Geographical Society, who also approved this idea.

After that, Mr. Shoigu instructed Artur Chilingarov to address this issue. Mr. Chilingarov reached me through Mr. Orlov and suggested that I take part.

I consider the Arctic to be very interesting and important, so I agreed right away and went to Beijing. After discussing joint actions, we tried to assess this project from a different angle and convinced the Chinese side that, first of all, this expedition should be dedicated to the 70th anniversary of Victory in World War II. Second, we proposed that this should be a Russian-Chinese expedition. But I repeat that, from the beginning, this was a Chinese initiative.

We reached an agreement in April 2015 and started actively preparing for the expedition. I visited France twice because the trimaran yacht was berthed at Trinité-sur-Mer port and was being readied for the Arctic voyage. As I have repeatedly traveled in the Arctic, I compiled a list of all essential work necessary to ready the yacht for this extreme trip.

From May through August, I tried hard to obtain various permissions and approvals, with Mr. Guo Chuan preparing the yacht.

How many people were involved in the expedition, and from where did you set out?

Members of the expedition sailed from France. I was unable to join them because I was still obtaining various permissions and approvals in Russia. The expedition first reached Kirkenes, Norway, and later sailed on to Murmansk. I met the crew there. The expedition got a warm welcome in Murmansk, and they saw us off in an impressive setting. It should be noted that the city administration, Murmansk Region Governor Marina Kovtun, Deputy Governor Grigory Straty, Atomflot, Rosmorport, Rosmorrechflot officials, the high command of the Russian Northern Fleet, border guards, the local customs house and many other companies and organizations, actively supported us.

On September 3, we left Murmansk and sailed toward the Bering Strait. As we were supposed to set a world record during our voyage, we clocked the exact time when the voyage started, upon exiting Kola Bay.

How did the expedition proceed?

We covered the entire route form Murmansk to Cape Dezhnyov under sail for the first time in history. Even I had never sailed in the Arctic. I had taken a boat to the region at 78-82 degrees northern latitude, which is much farther north than our latest route. During my voyage, we passed through ice formations, and I was forced to switch on the ship's engine. This time, we didn't turn on the engine even once. We covered all 3,200 nautical miles under sail alone, and this is an undisputed achievement. We covered the entire route over an unprecedentedly short time period.

In 2012, I sailed through the Russian Arctic aboard the yacht Scorpios in 14 days. But I set out much further west from Barentsburg and reached the final destination in 14 days. And the current expedition reached Cape Dezhnyov in 12 days, or two days less than the previous record.

Could you say a few more words about the yacht? How fast does she go?

The yacht's speed is simply fantastic. I knew that she could develop a speed of about 30 knots, but we managed to reach a maximum speed of 38 knots (70.3 kph — Ed.) under sail. This is an incredible speed, as far as tall ships are concerned. This yacht has set several world records. She flies faster than the waves and even the wind. We are making 30 knots in 20-knot winds and creating an apparent wind.

On the whole, the yacht is intended for only one person, and the six-person crew were feeling rather uncomfortable aboard. There were only two bunks for six men.

Did you take turns sleeping?

Yes, of course. This yacht is quite Spartan, with no restrooms, no galley and bunks. In all, we spent 24 days aboard this yacht and covered 8,000 nautical miles, the distance between Murmansk and Qingdao.

Was your expedition completely successful, and can this record be improved?

I can give us a solid "good" mark (B grade). Perhaps, we could have performed better in some respects, but everything turned out the way it did. We lost two and even three days during Arctic doldrums. But, as it was our task to use sails alone, we didn't start our engine and waited for a fair wind. We made a couple of incorrect decisions while selecting our route in the Pacific Ocean and probably lost two more days there. I believe that we could have covered the entire distance in 20 days.

Did you face any force majeure circumstances during this trip?

The entire voyage turned force majeure from the very beginning. We set out during a storm. Fortunately, a fair but powerful wind was blowing, reaching 45 knots. This wind helped us reach the central sector of the Kara Sea in about two and a half days. We were traveling pretty fast but later encountered doldrums.

As we were sailing near ice formations, we faced constant risks, and we started encountering numerous ice floes after passing Vilkitsky Strait. Of course, this situation was quite extreme. Countless logs from Siberian rivers presented another major danger.

How did you feel after setting a world record? How did you celebrate?

I knew from the start that we would make it. We had an outstanding yacht and a professional crew. On the whole, we had no reason to doubt that we would succeed. True, I hoped to cover this route in ten days. And we would have probably made it, if the weather were slightly better. I think we made a mistake by choosing the southern route — not via Cape Zhelaniya (Wish) on the northern tip of Novaya Zemlya, but through the Kara Gate, which is 300 nautical miles longer. On the other hand, there was a fair wind blowing. If we sailed toward Cape Zhelaniya, we would have faced worse weather, but the route would have been shortened considerably.

As for the wind, the weather was quite fair the whole time, except for three days in the Arctic and two days of doldrums in the Pacific Ocean.

And we didn't celebrate our world record very much. We took photos, celebrated for a while and then sailed on to Qingdao. We still had to cover more than 4,000 nautical miles…