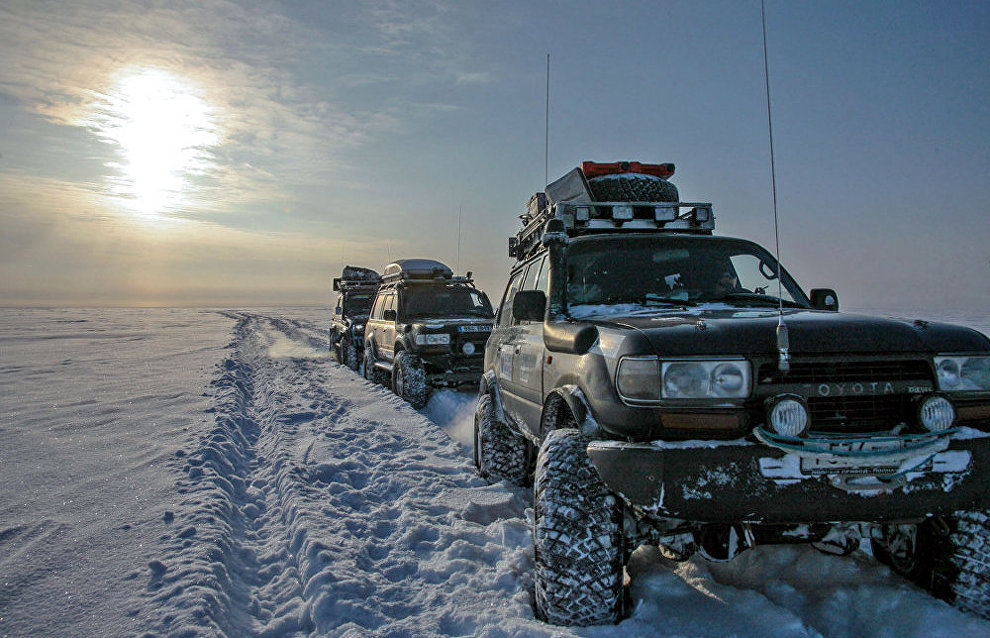 Yulia Zadorozhnaya: We want to let everyone know the Far North is not far

Novosibirsk’s Off Road Master Extreme Motor Travel Club plans to drive to the Far North in January 2016. Technical director of the outfit, Yulia Zadorozhnaya, spoke with Arctic.ru about the itinerary of this one-of-a-kind expedition and the motor vehicles they are going to use to negotiate.

Tell us about your club. What are you into?

The Off Road Master Extreme Motor Travel Club, a non-profit organization of Novosibirsk, was established in 1998.

The club members have over 18 extreme expeditions under their belts, many of which are of the highest rank of complexity.

The sixth (highest) rank itineraries always come as a serious test for us. Such ventures require thorough preparation, strong willpower and courage.

Year in and year out, our club members blaze new trails in Russia's remote areas and discover important historical facts about our country as a great power.

Among such expeditions is a trip to the Tofalar country, where Russia's smallest ethnicity lives on the slopes of the Eastern Sayan Mountains; a motorized trip along the Ob and Yenisei waterway (transport canal) built in the 19th century in the northern part of the Tomsk Region and the Krasnoyarsk Territory; a motorized journey across the Bolshoi Sayan Ridge; a trip on amphibious vehicles across the Putorana Plateau, a motorized ascent of the Mungun Taiga Mount (4,000 m), and the first-ever motorized trip to Dickon Island.

The founder of the club is a master of sports and honored traveler of Russia, Igor Kulikov. His enthusiasm and dedication to the club helped rally many people around him and create a team spirit under the name of the Off Road Master club

How did the idea of ​​the Beringia Course on the Arctic expedition came about? What is its purpose?

In our expeditions, we try to enjoy the spectacular beauty of northern nature and visit historical and cultural landmarks of our country. Already in 2013, when we planned our first major expedition to the Arctic, we realized that the Northern Sea Route will be the idea that ties all our future trips together. So, after Amderma, we went to Dickon, and are now getting ready to go to the coast of the Bering Strait, since its discovery has completed the establishment of the Northern Sea Route.

Russia's easternmost village of Uelen, which doesn't have a regular wheeled-vehicle service in winter or in summer, will be the final destination of our motorized journey. Uelen was reached on wheeled vehicles only on three occasions: once on a ZIL truck and twice on Category-B all-terrain vehicles accompanied by crawler tractors. Our expedition is all about relying on ourselves. We want to make the first drive to the shore of the Bering Strait without any help. The expedition has the sixth (highest) rank of complexity according to the motorized sports tourism classification.

What is the itinerary of the expedition?

We can determine the itinerary only after we have covered it from point A to point B. There are no reliable sources that we can use to make sure the team covers the distance with minimal risks and as quickly as possible.

Generally speaking, we will cross the Krasnoyarsk Territory and cross into Yakutia, most likely using the Baikal-Amur Railroad, rather than the Verkhne-Markovsky winter road, as planned earlier. Anyone who has ever used this winter road to go to Mirny is well aware of the traffic jams formed by numerous trucks hauling their goods, which stretch for kilometers on end on inclining roads.

Once in Yakutia, we will head for Chukotka, and will most likely use Kolyma winter roads passing through Zyrianka. Sure enough, we will swing by Oymyakon. Having reached Bilibino, we will check our control chart and head for Cape Schmidt. Afterwards, the fun begins. There will still be winter roads along the coast on our way to Vankarem. Then, our team will enter uncharted territory. The simplest thing to do would be to cross the Kolyuchinskaya Bay, reach Enurmino and make a shortcut across the mainland to the Gulf of Saint Lawrence. Afterwards we can follow the southeast coast to reach our destination, the village of Uelen.

As for our return trip, talking about it is premature and pointless. We are considering a variety of options and are mentally prepared to make it back on our own from that point in easternmost Russia, almost the edge of the world, to the mainland and solid winter roads and highways. The reason is the inevitable arrival of spring and the melting of the so-useful-to-us sea ice and ice crust in the tundra.

How many people will take part in the expedition?

We are still working on the list of expedition members. As for now, the vehicle driven by expedition organizers from Novosibirsk with a navigator from St. Petersburg and a crew from Moscow will participate for sure. There are two crews from Estonia, including Rait Paimets, who went to Dickon with us, but their participation is questionable due to the complexities involved in obtaining permits to enter Chukotka.

There will be two female participants in the Russian crews. The participation of women in such challenging outfits is the Off Road Master club's tradition established by Valentina Kulikova, club founder Igor Kulikov's wife, who accompanied her husband in the most challenging expeditions. Since then, the girls in our club are actively involved in organizing and participating in the expeditions.

This is a motorized expedition. Have the vehicles been designed specifically for Arctic conditions?

Vehicles for such projects are built from the ground up. Among us, we say "to build a car," which is a good description of what we do with our vehicles. A vehicle is indeed built up using a variety of complex, often innovative engineering solutions, and is very different from the one that originally came off the assembly line.

We have been using the Land Cruiser 78 in our Arctic expeditions in recent years, but each time we plan an expedition we come up with new and better solutions for technical equipment, and implement them.

For example, our preparations for an expedition to Chukotka include the following. The suspension now includes reinforced and extremely rigid springs borrowed from armored TLC 80. The pneumatic cushions that are installed in addition to the springs now have better mounts. Shock absorbers have been replaced with reinforced oil shockers with nitrogen upward thrust and an expansion gas chamber.

We did a lot to protect the engine from overcooling, which often led to the sump ventilation system malfunctions and a racing engine. The ventilation system now has an incident pressure discharge valve, and the system is equipped with heater tape. We use innovative technology whenever it is available. Thus, we painted the oil pan and cylinder head cover with heat-insulating commercial-grade paint and protected the engine compartment with layered blinds made of the latest materials.

To improve reliability and reduce fuel consumption, we tweaked the transmission and engine. Now, the engine is outfitted with a completely mechanical fuel pump, which works well with the manual transmission enhanced with an expanded-diameter clutch from a 1kd unit and a gear-driven mechanical transfer box.

To improve autonomy and reduce weight, the second fuel tank has a larger capacity and is made of aluminum. Now, the total tank capacity (without jerricans) is about 300 liters of diesel fuel.

We plan to spend several months in the expedition, so we worked to improve the comfort and insulation of the cabin. We now have double weatherstrips on the doors and double or triple insulation on the door, floor, ceiling and body panels. We replaced several windows with double-glazed windows — we used both laminated glass and modern solutions made from solid polycarbonate. The trunk windows are now covered with storage compartments enhanced with two built-in layers of insulation.

The heating system has also been reworked and warm air can be now supplied anywhere inside the vehicle to maintain the temperature in the cabin during the night when the engine is turned off and also during unusually cold weather.

In addition to structural improvements, we replace all consumables before each start — all the way from flywheels to wheels. We also tune the engine and check all the auxiliary equipment.

All vehicles are equipped with low-pressure Arctic trucks AT-405 38 tires.

How long will the expedition last?

After we did our work on the itinerary, we scheduled our dates from January 15 (start in Novosibirsk) to March 8 (finish in Novosibirsk), but everyone agrees that we may not be able to meet these deadlines.

Arctic conditions, especially at that time, can be harsh. Aren't you concerned with potential force majeure situations?

We aren't concerned with force majeure situations. What we try to do instead is to be ready for them. The worst thing that can happen while we are on the road is an equipment breakdown or physical injury. We are prepared for breakdowns. We take along a large number of parts and tools for conducting repairs in field conditions. Every pilot is familiar with his vehicle down to the last bolt and can repair almost anything. Even if a vehicle is beyond repair, its crew can be placed in the rest vehicles and safely reach the nearest populated area.

The vehicles and crews have VHF and satellite communication devices.

We also try to be prepared for potential injuries. First, all expedition members are seasoned tourists who are prepared for such situations, which already reduces the likelihood of anyone getting injured. Everyone has the necessary first aid skills. The organizers' vehicle has a large first-aid kit that is built based on the experience of several generations of travelers, including hikers and cave explorers.

We were equally thoughtful about choosing the time for our expedition. During the harshest weather conditions in late January, we will be driving on properly serviced winter roads and general roads. We will start driving in the tundra and on ice in early February. Of course, this is the time when the most severe blizzards occur, but we cannot leave sooner, as the winter roads won't set yet. If we start out later, given the length of the itinerary, we may find ourselves in thawing tundra and on slippery winter roads. When we were ending our trip and entering Amderma in early March, it was a matter of hours for us to get to the safety — winter roads were closed right after we passed, and the vehicles that remained on the road were towed by rescue services.

What results are you looking for?

We want to see our beautiful, vast and diverse country. We want our fellow Russians to realize that the Far North is not that far. Due to a keen interest in our reports, photos and videos, we want to tell everyone about how people live in such difficult and harsh conditions.

One of the goals of this project is to draw attention to the largely man-induced problems haunting the modern Arctic.

What other expeditions are you planning for next year?

As is custom, the idea for ​​the next expedition comes to us during the one we are in. However, many Beringia participants have for years been thinking about going to the northernmost tip of our continent — Cape Chelyuskin. In addition to the great historical importance of Cape Chelyuskin and the scenic route to the destination through the foothills of the Byrranga  mountains on the Taimyr Peninsula and the coast of the Kara Sea, the itinerary has a sporting interest for us, as this destination has never been reached on Category B wheeled vehicles. Also, when we went to Amderma, we had the idea to go to Vaigach Island and, perhaps, the Novaya Zemlya Archipelago, which is so far unrealized. Our team is also interested in going from Evenkia to Taimyr through the Putorana Plateau foothills. We're headed for the Arctic.